George Harrison’s Great Song That Doesn’t Get Talked About

An appreciation of “It’s All Too Much.” 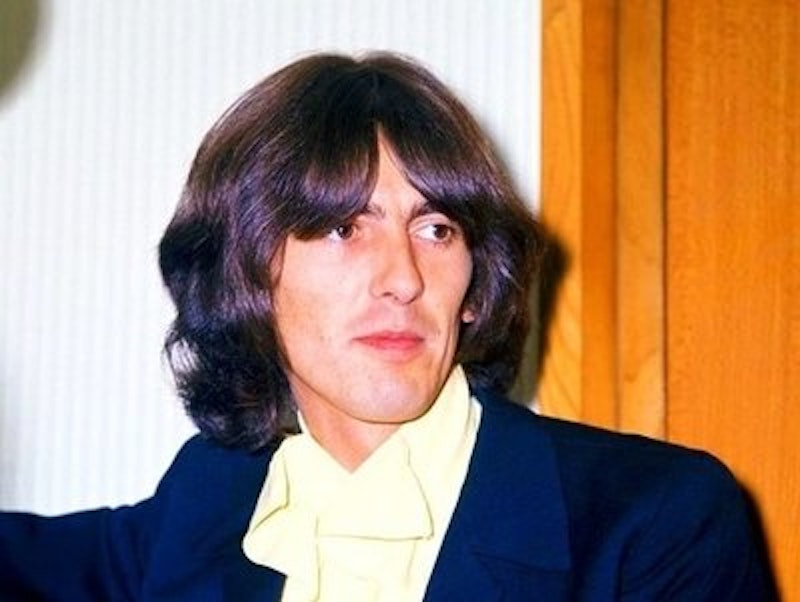 “It’s All Too Much,” buried on Yellow Submarine, is one of the most satisfying rock songs I know. It opens with bravura feedback followed by a welling up of guitar, organ, and drums; the instruments’ combination is stinging and cool, soothing and (odd word here) filling. The tune’s pretty and the refrain marches out of the throat: “It’s all too much for me to take, the love that’s all around me,” and so on. A trite meaning, but that’s rock—look at “All You Need Is Love.” You can still let go and the music carries your mouth along.

The intimidating Ian MacDonald, muttering inside his Revolution in the Head, dispatches my gem this way: “protracted exercise in drug-mesmerised G-pedal monotony… hamfisted feedback guitar… meaningless snatch of The Merseys’ 1966 hit ‘Sorrow’…” Jonathan Gould, in his Can’t Buy Me Love: The Beatles, Britain, and America, says the song and “its droning psychedelic accompaniment” were old hat by 1969. Philip Norman, in Shout!, ignores “Too Much” altogether, as does Bob Spitz in The Beatles. And the Beatles, of course, wouldn’t let the song on their albums.

For his part, MacDonald does note a good line: “Show me that I’m everywhere and get me home for tea.” But he acts as if George Harrison, in writing the line, was giving himself away. In England, MacDonald says, “tradition, nature, and the child’s-eye-view were the things which sprang most readily to the LSD-heightened Anglo-Saxon mind.” George’s remark is a prize specimen of this tendency, or so we’re told. But George didn’t write that much about the English nursery. He expended a lot more sweat on coming eye to eye with Mr. Giant Universe (“Within You Without You,” “My Sweet Lord,” the many things he said about Krishna). In “All Too Much,” he celebrated oneness with the Giant All. In that same song, he also recognized that oneness has its limits. MacDonald may not like that attitude, but I don’t think it’s based on Peter Rabbit. George, a self-important mystic, was also a truculent Scouse cynic. He noticed a few things. Here he mentions one of them. Doing so puts his rhapsody in perspective, but he does it anyway.

The rhapsody itself remains luxurious. “It’s All Too Much” tells about the happy “Law’s mercy” that overcomes one face to face with the reality (or illusion) of our assured place in the cosmic Is. Our little speck of me belongs to the Great Swirl, our speck is the Swirl, the Swirl is… and then the horizon goes whoopsy-daisy and our mind does nothing but throb. Harrison’s song reproduces the experience, which is one that suits rock. A mind that’s swept by lust or sorrow or rage or the swoon of Oneness is a mind that fits into a rock song. This song combines rock’s sing-along qualities (nice tune) and its tendency to attack the listener, to wrap the listener up. The beat does that, so do the guitar lines, and so do the song’s layers of sonic detail. A rock song doesn’t have to be highly produced, but if it is, the approach here works well. The listener falls into the levels of sound, able to hear a thousand beguiling things and to sort out nothing. The listener falls into the tune, which comes out of the mouth so easily. The universe really isn’t one—or, if it is, that doesn’t matter so much—but this song makes you feel like it ought to be.