Brad Paisley is more than just a CMT favorite. 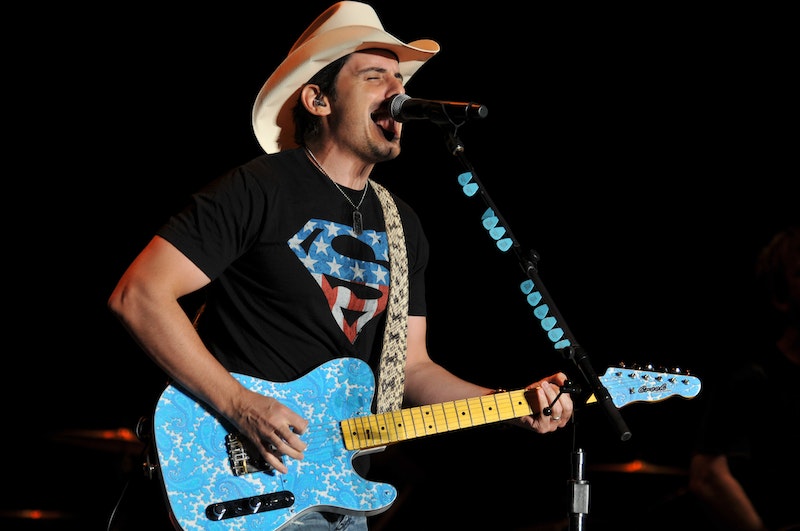 Last year I “anointed” Miranda Lambert as the Queen of Country Music. Dispensing with the ointment, I present you with the King.

Since he showed up around the turn of the millennium, Brad Paisley has released some dozen albums and almost 200 songs. What's remarkable about this body of work, virtually all of which he co-wrote, is its consistency, but also its variety. Many of these songs are hilarious. Many are sad. Most are basically traditional in their structure and performance, and a number, I believe, will ascend into the canon of country classics. If you're scouting around for the inheritor of Hank and Lefty, Merle and Buck, Alan Jackson and Vince Gill, you could not do better.

Top 40 country music right now is rather annoying. The arrangements are poppish, with electronic rhythm tracks, vocal effects, half-competent rapped verses, and let's-party lyrics. It's still dominated by bros, often expressing their appreciation for various portions of female anatomy and tequila. Paisley is not above these themes at all and can be heard on the radio. But he's also one of the few country stars who's still singing lonely songs too, or emphasizing the downside of alcohol abuse for example, or the memory of her, or both (as on "Whiskey Lullaby," a duet with Alison Krauss). The production is crisp and contemporary, but the songs are always engaged in some way with the history of the form. He venerates the tradition and has worked in his time with many of its avatars: George Jones and Bill Anderson, Little Jimmy Dickens and, um, Mick Jagger (on "Drive of Shame" from this year's fine album Love and War).

The first thing to say about Paisley is that he's about the best guitar player you’ve ever heard. He's technically proficient, unbelievably fast, and shows off on almost every song. This could be annoying, but ends up being charming: every solo makes sense, takes on the form of a narrative, comes from a coherent point of view. And though he's often playing a Nashville-style country Chet Atkins electric, he will also break off a rock solo. His playing is often jazz-inflected (even on his second album, he played "You Have that Effect on Me" as a straight standard). He can throw down a Dick-Dale-type surf cadenza ("Turf's Up"), or play acoustic in a Merle-Travis bluegrass manner ("Kentucky Jelly" starts like that, anyway), or pull out a 12-string and pick out a hymn (check his lovely rendition of "What a Friend We Have in Jesus"), or play the hell out of the acoustic or electric blues ("Playing With Fire").

He's the only country star I can think of who has released an album of instrumentals (Play), for example; it’s astonishing. But on any given song, he can tell a joke with a solo ("Camouflage"), or pay tribute to a series of great studio players, duel with himself on different guitars or with the fiddle or pedal steel. In the form’s history, no charting country star that I can think of, with the possible exception of Gill, is as good a guitar player as Paisley, though if you brought up Steve Wariner (with whom Paisley plays a lovely duet on Play), Keith Urban, or Lee Roy Parnell, that would at least be in the region.

As a singer, he's not a classic on the level of George Jones or Johnny Cash, but he's tuneful and a master of country timing, which is an art and science in itself. And his lyrics are always better than they strictly need to be: clever as hell, often completely hilarious ("Flowers," "Ticks"), especially on matters of gender ("You Need a Man Around Here") or contemporary cultural trends ("The Internet is Forever"), or freshly exploring traditional country themes and styles ("Hold Me in Your Arms and Let Me Fall").

Remarkably, he's been courageous too. He took a lot of grief in 2013 for "Accidental Racist," featuring LL Cool J. Admittedly, it does show a bit of a tin ear on the issues. But it might be the only charting country song in history that’s squarely a reflection on race and racism. It's a start. His duet with John Fogerty from this year, "Love and War," connects soldiers' experiences in Vietnam to Iraq in a way that’s not just "God Bless the USA." "Karate" is a pretty interesting take on domestic abuse.

Paisley's a real charmer onstage, and sometimes seems omnipresent, hosting awards shows, hamming it up on late-night, or pushing through a Nationwide ad. Don’t let that distract you from the surpassing excellence. Anyway, cutting down from 200 to 100, 100 to 50, and so on, here is a playlist, as strong, multifarious, and grounded a repertoire as there is in contemporary country music.