For All Intents and Purposes, The Strokes Are Back

On new single "One Way Trigger." 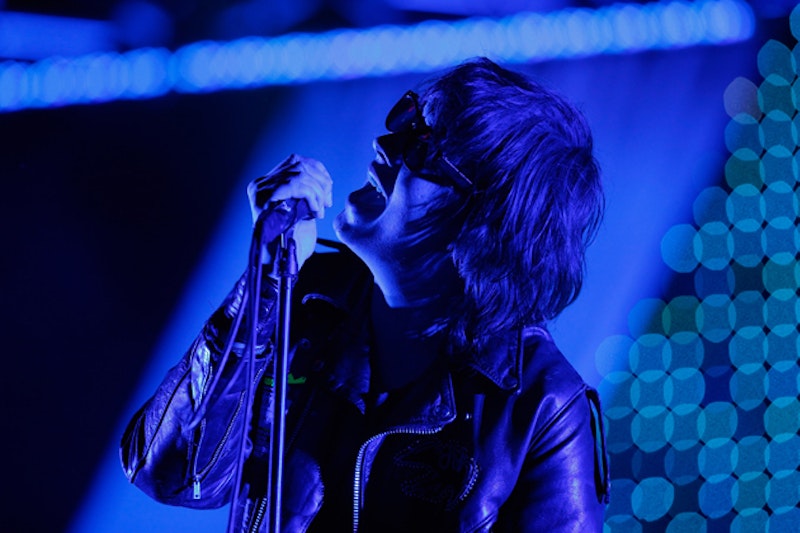 "12:51" closed the deal handily, percolating guitars-as-synths effects and all. "Juicebox" felt marginal and desperate by comparison. And while "Under Cover of Darkness" fared slightly—just slightly—better, it probably isn't anybody's classical platonic ideal of how a lead single by The Strokes should roll.

Pity the Strokes. The Strokes can't just return with a pass to re-engage with their public, or a multiplicity of publics. They aren't allowed to fumble or miscalculate. Rock 'n’ roll must be saved, again, and blithely, or else they've failed and the larger culture will baptize the band with a metaphorical orange cooler of Hatorade. Arguably, this isn't the absolute worst problem a working band can have; this perpetual leveling of over-expectation speaks to the lasting impact of their debut EP and first two albums, and the desire of fans to re-live the experience of being vicariously cruised by insouciant young alcoholics on the Lower East Side of Manhattan.

"One Way Trigger," the quintet's fourth comeback single, dropped as a free download last Friday afternoon. The most immediate aspect of the song is Julian Casablanca's strained falsetto, a range that doesn't come naturally to him; invariably that reminded me of Fine Young Cannibals and Whitney Houston's "I Wanna Dance With Somebody," not A-ha. Wisely, the singer shifts gears into a lower octave default mode, mainly when negotiating verses. The stankface shock of this quasi-melismatic derring-do fades over time: what at first seemed off-puttingly bizarre reveals itself as a canny artistic gambit that lends "Trigger" a skein of schizophrenia. That baffling falsetto—the chutzpah of the thing—is what lands the listener, and once a hook is protruding through your lip, you begin to notice how well the song is actually built.

By this rationale, "Trigger" is a really, really good Strokes song in the mold of "Heart In A Cage" or "Gratisfaction": it sounds like the first take was cut while horsing around during sound check. The aforementioned guitars-as-synths effect has been part of the Strokes arsenal for a minute now, but actual synthesizers were deployed here alongside guitar, bass, drums, and piano: this compositional web is startlingly intricate and nuanced while projecting a grand illusion of simplicity.

Call it the nu-Krautrock ideal. Pistons pump at just the right level of urgency. Melodies and counter-melodies jog circles around one another. The bass surges knowingly in the mix. Dazzling fake Thin Lizzy leads get spotlight moments. Chords jangling almost acoustically submit to laser-beam acupunctural assaults. The drums feel as flat and hard as dog turds after two or three days baking under the hot Texas sun. And, over it all, Casablanca’s freestyles madly and schizophrenically like he's the first dude ever to argue with the devil hopping up and down on one shoulder and the angel perched primly on the other, a vortex of indecision cross-chatter wonderfully at odds with the machine-esque precision of the music itself. All that and no flop sweat on the basement floor. Listen to it again; there's something there.