Recollections of a once-great band. 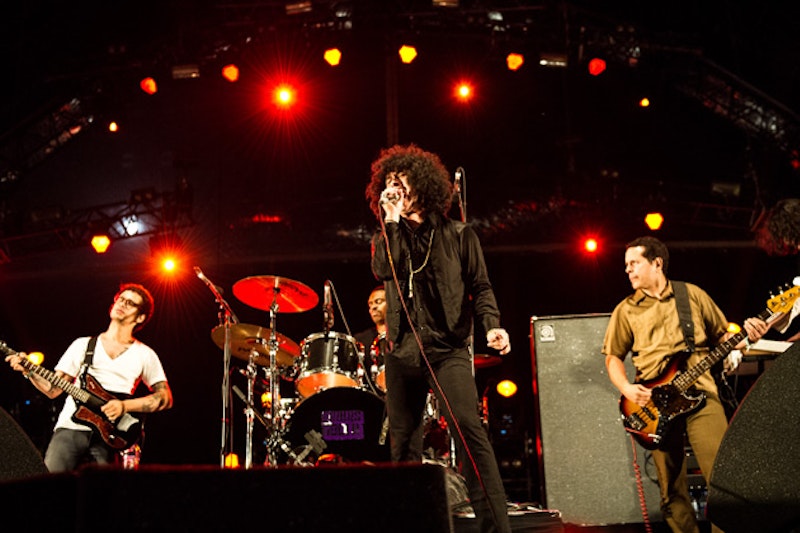 Last week, Cedric Bixler-Zavala announced on Twitter that his partnership with Omar Rodriguez-Lopez, one that carried both of them through their groups At the Drive-In and The Mars Volta for almost 20 years, had dissolved, due to disagreements about touring and Omar’s focus on his latest side-band, Bosnian Rainbows. Most people saw The Mars Volta as a laughable, ridiculous and meandering aughts update on gassy prog rock like ELP, Rush, early Pink Floyd, or Yes. There were album sleeves by Storm Thorgerson, dozens of 10-minute plus compositions, multi-movement suites as LP’s (2005’s Frances the Mute the high watermark, a five-song, 80-minute melodrama about a boy’s search for his biological parents), a heavy free jazz and avant garde influence, lots of live improvisation, thesaurus licking, acid alliteration, Burroughs word salad lyrics, and a soft spot for atonal licks and extended solos. This was all complete anathema to most of the emo punk kids that grew up going to At the Drive-In shows, and the name The Mars Volta is usually said with a snicker.

“Jam bands” are usually terminally mellow and morbidly optimistic, like Phish, the Dead, or the Bonnaroo lineup. TMV were dark, cinematic, aggressive towards their audience and challenging even to their most devoted fans. Excluding the last two records, 2009’s Octahedron and 2012’s Noctourniquet, their output was bold and bombastic, a rock band if Miles Davis ever fronted one. Debut EP Tremulant remains their most concise statement: three songs weaving ambient, film sound-tracky intros and outros with a kinetic, paranoid rock sound. Bixler Zavala’s were a free associative jumble culling from signposts of the Dune series, Dr. Who, Lovecraft, Spanish and Mexican folklore, Philip K. Dick, and Marquis de Sade. Rodriguez-Lopez, the bandleader, dictator, omnipotent composer, and constant obstinate, thinks nothing of his fans, preferring instead to jettison whatever project of his is gaining any popularity at the time.

The second concert I ever saw was The Mars Volta opening for System of a Down at Baltimore’s First Mariner Arena on August 22, 2005. My dad graciously took me—I was 13—and we sat in solidarity through an offensively bad ninth-wave grunge metal abortion called Bad Acid Trip. When TMV came on, the lights dimmed and Ennio Morriconne’s “Fistful of Dollars” theme roared thru the PA, introducing the eight-piece with a grandeur anyone could say was pretentious, if not for their throbbing, attack style assault of three songs from Frances the Mute and one from De-Loused: “Cygnus… Vismund Cygnus,” “L’Via L’Viaquez,” “The Widow,” and an extended and transmuted “Drunkship of Lanterns.” They were Jeff Beck meets Fela Kuti snaking through salsa grooves, prog riffs, atonal breakdowns, spaceouts, freakouts, guitars over shoulders, microphones over heads. It was a musically powerful night, but it was the band’s energy and the unity of their aesthetic that made it a great, engrossing rock show. They put where you deserve: at their feet, at their will. My dad walked out a bona fide fan, and I was ecstatic to have seen my favorite band at the height of their career. It was bound to blow up acrimoniously at some point, but I’m overjoyed that I saw this classic, mammoth rock band live in their prime and heard their records as they came out, a rare treasure when so many of my heroes are either dead or long past their peak.