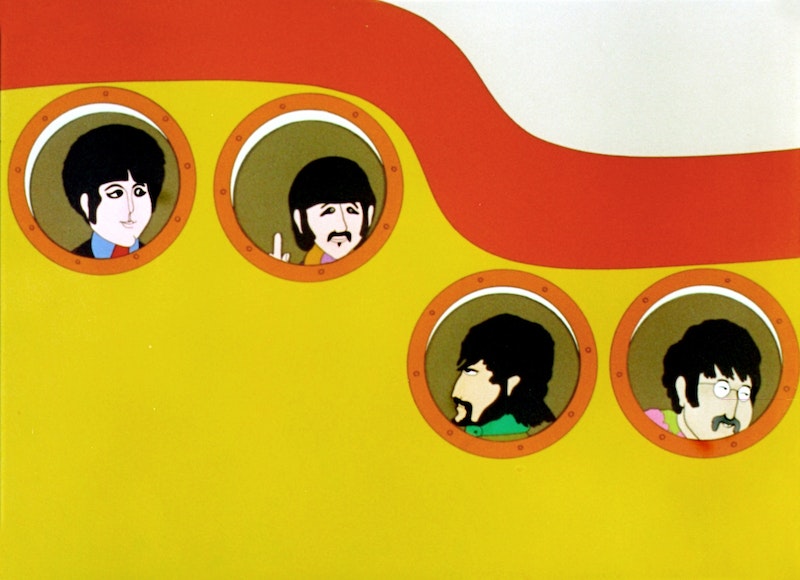 When young I formed an ambition: to get high and watch Yellow Submarine. I’ve never managed it. Odd, considering. I suppose the roadblock was a shortage of Yellow Submarine tapes and discs; they were around, but maybe not at my local store. Now the movie can be watched on YouTube, a fact I should be grateful for. The movie came out 49 years ago, a confounding half century that has brought us to a pretty pass. Stupidity and fear seem to be in the saddle. People are watching their livelihoods disappear, and they think the government’s a joke. But turn on your computer and you can see Yellow Submarine whenever you want. Anybody, at will, can be exposed to playfulness, inventiveness, beauty, intelligence, and compassion.

The Beatles wrote their songs. A man named George Dunning oversaw 200 artists (per Wikipedia), a fellow named Heinz Edelmann served as art director, and there resulted an hour-plus of animated film that lived up to the Beatles’ music. Then the Internet happened. For any of these things to take place would be remarkable. The three of them? We’re on a streak.

Meanwhile, our civic life is such a mess that—in the U.S., anyway—it looks like it might collapse. The public has debauched itself. But the good and bad, the Beatles and Trump, come as a bundle. Technology and democracy have given muscle to prole taste, hierarchies of taste have been subverted. The Baby Boomers, those assholes, kicked over proper ideas of music, grooming, and sexual comportment when young, and now they’ve done the same to political discourse and the selection of leaders. In either case, what’s been on display has been the Self. A couple of young men were set loose with millions of dollars’ worth of recording equipment, which they could use in accord with whatever idea of musicality crossed their minds. The results (on the whole) were beautiful to a historic degree, and they were disseminated around the world by further technology. Trump, by contrast, has been an embarrassment. But “set loose” applies to him too, and technology made him the phenomenon he is. Without cable and Twitter, he’d be a bore at a dinner party. Instead he’s a pop sensation.

Don’t take this lying down. Find the good side of our situation. George Dunning, Heinz Edelmann, and the Beatles make up for a lot. If the world doesn’t end in the next 20 years, we’ll have made it to an era where beauty and originality can flourish like never before. And, if you’ll forgive me, I’ll now fulfill a long-standing ambition.

Best Beatles songs. As of this writing, they’d appear to be “Hey Bulldog,” “I Am the Walrus,” “Please Please Me,” “Twist and Shout,” “Everybody Has Something to Hide Except for Me and My Monkey,” “And Your Bird Can Sing,” “I Want to Hold Your Hand,” Baby, You’re a Rich Man,” “I’m Only Sleeping,” “Your Mother Should Know,” “Happiness Is a Warm Gun,” and “I’ve Just Seen a Face.” Updates may be posted.