Bob Dylan in D.C.: This Wheel Has Exploded

Pack up his tent, he ain’t goin’ nowhere. 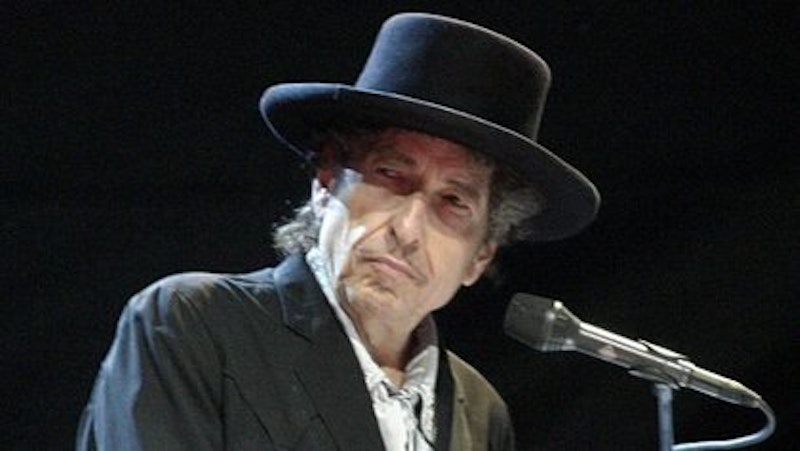 The holidays have begun, so in that spirit I’ve one or two positive comments about Bob Dylan’s abysmal show at Washington, D.C.’s Verizon Center on Dec. 20. First, his opening song, “I’ll Be Your Baby Tonight,” wasn’t half bad, mostly because his decent MOR backing band provided a carnival blitz for the 71-year-old Dylan, who sat at the right-hand of the stage, and seemed to relish singing “Bring that bottle over here,” from the closing tune of John Wesley Harding.

Second… well, really I can’t in all honesty report anything else noteworthy about the brief concert, at least as far the music went, that didn’t make me wish I was home reading David Nasaw’s plodding but exhaustive new biography of Joseph P. Kennedy. I will say that it’s swell that Dylan, who can’t need the money (despite his dormitory of dependents), continues to tour across the country, owing to either restlessness or a true affinity for performing before the public. And as a sociological exercise, the event was diverting: as I predicted to my two sons—actually, it was my 20-year-old musician/filmmaker young man who insisted we attend, since he wanted to see the “living legend” about whom he’s heard so much about since the age of three—it was an audience of old hippies juggling cell phones and, as you’d expect, a lot of parent/child combinations. In fact, my younger son, 18, saw half a dozen of his friends at the Verizon Center, some roaming about with fathers who looked just as worse for wear as yours truly. In short, it wasn’t an attractive crowd, with the average age probably not much lower than the hambone septuagenarian on stage. That’s trifling, though, since this kind of nostalgia concert isn’t supposed to, one hopes, double as a pick-up scene. Conjure up the image of a really, really depressing 40th high school or college reunion and you get the picture.

I’m 57, and was a sprout in the 1960s, and so I missed the great Dylan performances of ’62-’66, before he sensibly decided to choose life over an overdose and used a not terribly serious motorcycle accident to go into seclusion and not embark on a full-scale tour again until 1974. I saw one of those shows at the Nassau Coliseum, and though The Band took up too much time and Dylan rushed through much of set, it was great: really, opening and closing with Blonde on Blonde’s “Most Likely You Go Your Way and I’ll Go Mine” was a wonderfully eccentric twist. I also was at Madison Square Garden on Dec. 8, 1975 for “Night of the Hurricane,” his last stop on the first (and by far most successful) leg of his overwhelming and exhilarating Rolling Thunder Revue tour.

Finally, the last time I saw Dylan was in Baltimore in October of ’78, not long before he switched gears and tried to fool his waning audience with another skin-shedding by going born-again on us. I had press seats, 10th row maybe, and the concert was so bad, with Dylan doing a Neil Diamond act with a sequined costume, that I did a runner before its conclusion.

I hadn’t expected to see the man live again—even as I still collect bootleg material from his fertile period, loved the documentary No Direction Home, am pissed that his second volume of Chronicles remains unwritten, and have all his released “Radio Hour” CD compilations. But Nicky intervened, saying last August that tickets had gone on sale for this November show, and he really wanted us to attend together. I could’ve flat-out refused, but that’d hardly be sporting. After all, he’s retrieved a bunch of old Dylan albums from the basement, knows every note of Highway 61 by heart, and has a poster on his wall of Dylan, circa ’65, with that tab-collar shirt, shades and harmonica rack dangling around his neck, the period when the rock star was the coolest man alive.

I’ve read a few reviews of Dylan’s current tour and most of them are pure hogwash. Dave McKenna, for example, writing in The Washington Post offered this absurd observation: “[Dylan] and his fabulous backing quintet provided musical arrangements so unfamiliar and so unlike the original versions that it was often hard to even identify which title he was performing. Things have indeed changed.”

Nuts to that. Of course Dylan’s switched up his well-known songs, but anyone who’s even passably well-versed in those ancient compositions just had to hear the first line of, say, “To Ramona” or “Ballad of a Thin Man” and instantly know what self-parody had begun. “Chimes of Freedom,” which, in retrospect, hasn’t aged well, was particularly hard on the ears, as was “Like a Rolling Stone.” Personally, I thought Dylan’s growling take—as for that growl or rasp, I’m sure it’s part affectation—of “A Hard Rain’s A-Gonna Fall” was the evening’s low point. In my head, while Dylan was going through the motions of his gem (released in ’63), mythically a reaction to the Cuban Missile Crisis in October of ’62, I played back his stunning rendition of the song at George Harrison’s Bangladesh concert in August, 1971. The ridiculousness of seeing Dylan live in 2012 made me see stars—glorious ones—as I ticked off the minutes until we could leave. At one point, I was lost in a “thought dream,” where as in a Time Tunnel plot, we were transported back to a Dylan & Hawks show from ’66, and “Tell Me Momma” exploded from tiny amps.

On the drive home to Baltimore the boys and I re-hashed the experience, and Nicky remained thrilled that he’d seen this American icon. I asked Booker what his favorite song of the set was and he responded, curtly, “None.” Harsh, but accurate.