All I Really Want To Do: See Bob Dylan Live 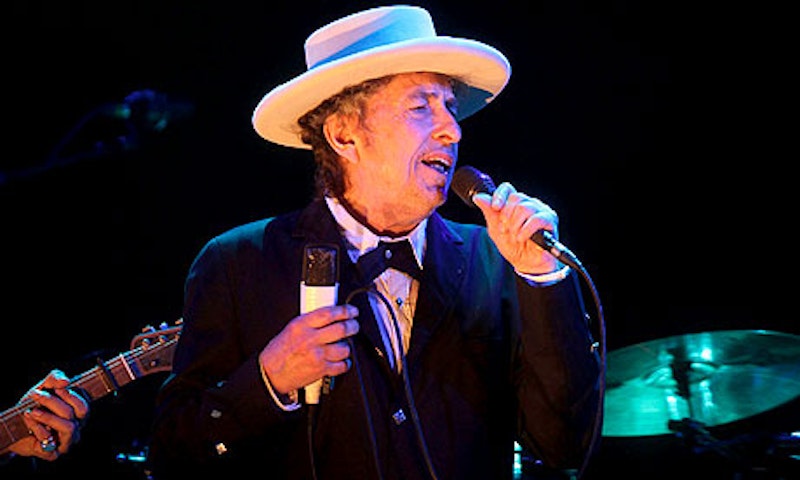 Last Tuesday, after years of being exposed to, listening, then obsessing over the music of Bob Dylan (pre-1976), I finally saw him live in Washington, D.C. Can’t say it was a disappointment. It’s common knowledge that “Dylan live” is a separate beast unto itself, an acquired taste like Vegemite, extensive body modification, or BDSM. Seeing Dylan and his anonymous Blues Band has been an exercise in masochism for roughly 25 years. Decades of singing beyond his limited range, lots of booze and drugs, and sucking down endless cigarettes has left his voice totally and utterly shot; his are the Trash Compactor Blues, unrecognizable re-workings of his classic material and vaguely more familiar new songs sung in irritating “upswing”: i.e., cramming as many words and syllables into a bar, putting an upward emphasis at the end, and disregarding intelligibility, drama, emotion, the classic rock singer idiom for… I’m not sure exactly.

Dylan’s Never Ending Tour has plenty of adherents clamoring to shell out triple figures to see the Bard for the 40th time: check out Expecting Rain for a very active community of aging Boomers with an active hobby. I don’t understand how anyone who loves Dylan’s 1965-66 masterworks and most material before 1976 could stand to see this iteration, the “Riverboat Gambler” or “Vegas Pederast” era, easily Dylan’s longest, more than just once. I’d never seen him before, and having been weaned on his Electric Poet work and my dad’s thesaurus of Dylanology, it’d be perverse of me to miss seeing a living legend before he passes on to his eternal reward sooner rather than later. At his Verizon Center show, I got exactly what I wanted: to be in the same room as Bob Dylan (an honor, still), and to hear his voice, maladjusted as it may be, cutting through the giant arena and hitting me right in the gut.

Don’t matter that we were hundreds of feet away and Dylan and his band looked like ants, or that the set list was disappointing, featuring more than a comfortable share of aughts work (“Thunder on the Mountain” and “Things Have Changed” being the least bland, but I wouldn’t even bother with this material if it had been done by anyone else), and none of my favorites, which have been making rare appearances on this leg—“Visions of Johanna,” “Love Minus Zero/No Limit,” “Desolation Row.” Dylan opened with a music hall, somewhat goofy version of John Wesley Harding’s “I’ll Be Your Baby Tonight,” following it up with a useless “To Ramona” with Mark Knopfler on guitar (the Dire Straits guitarist opened, and his fans were easy to spot, walking out less than halfway through Dylan’s set). “Tangled Up in Blue” might’ve been the only moment when Dylan’s voice had some clarity in it, and his pipes were free of phlegm and dead tissue as he soared on the chorus. “A Hard Rain’s A-Gonna Fall” and “Highway 61 Revisited” were more of the same blues vamping and a notable lyric here or there, but it was already time for zoning out. “Ballad of a Thin Man” was musically faithful but vocally a disaster. But I can’t say I was expecting anything else. I saw Bob Dylan, the greatest living American songwriter, in concert. That’s all I wanted anyway.