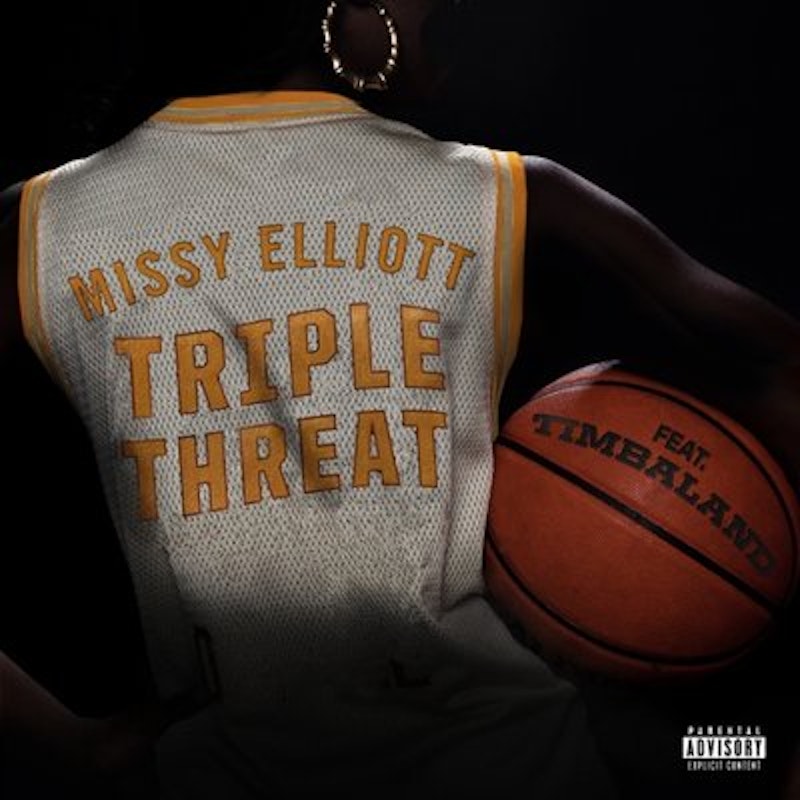 This column for Splice Today began after a long-running, similarly structured column for another publication perished due to irreconcilable creative differences between myself and the editors. The name wasn’t picked entirely at random; I needed a name that telegraphed to the reader that “three” was my new métier, that “five” was toast, because it was important that I wasn’t repeating myself, that I was moving onward and upward, that by committing myself to writing about three songs every week instead of five, I might get to know those songs better and find more interesting and profound ways to write about music. This column, in other words, represents a reset button push of sorts, much as “Triple Threat” is intended to reintroduce Missy Elliott and Timbaland, as a package deal, to an urban pop diaspora that probably doesn’t remember them.

Do they pull it off? I don’t know. There’s a tacky brand of retro-futurism at work here: stutter-step beats, fake violins, and an onslaught of vocal FX/filters that remind me of the New Mutants character Warlock, whose black and yellow dermis was constantly glowing and morphing. Timbaland is a laughable MC who is given too much leash here, but his awfulness has the effect of setting the stage for Missy’s return and making her verses sound better by comparison. And those verses are slight and topically whatever—they’re back, they’re bad, they’re repping some hard liquor I’ve never heard of that rhymes with “people eater,” which is unintentionally hilarious and kind of awesome—but, again, they’re shunted through weird sonic channels and delivered with such confidence and panache that you almost forgive the lack of content and the self-indulgent outro. Needs a “Big Beast”-style Tarantino-directed video where they’re actually eating people.

Back in the days when GY!BE were a significant staple of my musical diet, 1999 through to 2002, roughly speaking, I came to the band seeking a very specific, very fatalistic sort of succor. In its moody restraint and gone-for-broke release, the anti-patriarchy Canadian collective embodied end-of-days porn, the surging, no-one spared, cities-buried-in-rubble  of doomsday without any of the attendant death and damnation one might have expected from a Y2K flameout or a coordinated terrorist clusterfuck or World War III generally. Catharsis may have had a place in the group’s anarchist cookbook, but its instrumental, winter solstice chamber-punk seemed more suited for screaming or tumbling headlong into the apocalyptic abyss than reveling in it or leapfrogging over it.

That said, “Mladic” is something special; it’s the sound of GY!BE letting its unwashed hair hang down from an ivory tower that, let’s face it, isn’t an especially happening place to be. Voices break over radio waves. Stringed instruments wring harmonies imitative of bagpipes, until they’re implying a multiplicity of rifle shots on a battlefield. The memoir nearly writes itself, the action materializing in the ether behind your eyelids: into the breach, into war. So guitarists mimic blacksmiths, forging weapons of war, until their labor is joined by jackbooted drums stomping into battle, until all concerned sync into a storming, Sonic Youth-ian rampage that’s so tense and aircraft-carrier heavy—but, wait. What’s happened? The bottom’s dropped out; the combatant and captives—the textures, timbres, and intensities—seem to be dancing wildly and merrily, and then, gradually, with a great degree of lethargy. A sweeping, coastline-annihilating coda subsides almost as quickly as it arrives, replaced by what sounds like shambling, salsa/marching band percussion.

It’s as if the group is winking at us, high-fiving the audience at the end of the set, passing out handbills to the next OWS action. “Mladic” dates back to before the GY!BE hiatus—in fact, I think they ending their Baltimore show in 2000 with this song, wandering through the audience—but for me it’s somehow them at their most human and most hopeful, and I welcome more structured excess in this vein.

I know, I know. Don’t call it a comeback: the throne of longest-in-the-tooth, poli-sci three-chord blargh isn’t one Bad Religion ever abdicated, even for a millisecond, and while you were busy growing up and getting to know Guy Dubord, they were still touring and recording and handing out college scholarships and writing songs like “Fuck You.” Which is to say: dynamic-qua-competent punk rock capable of rousing one’s inner disaffected 15-year-old regardless of how far back in the rearview that self may be.

So, in other words, “Fuck You” is more about Bad Religion’s continuing to be Bad Religion even if you don’t necessarily need Bad Religion anymore. That pregnant, corpulent housewife in the Bad Religion hoodie needs Bad Religion, and so does the 22-year-old hipster in the Bad Religion tee who jaywalked when you were driving through town, and so does your son. They will write a billion songs that sound just like this before Earth is sucked into the Sun and destroyed, and their eternal call to question authority in a generalized sense will continue to resonate in ways minor and major alike, and for that, we should all be grateful.