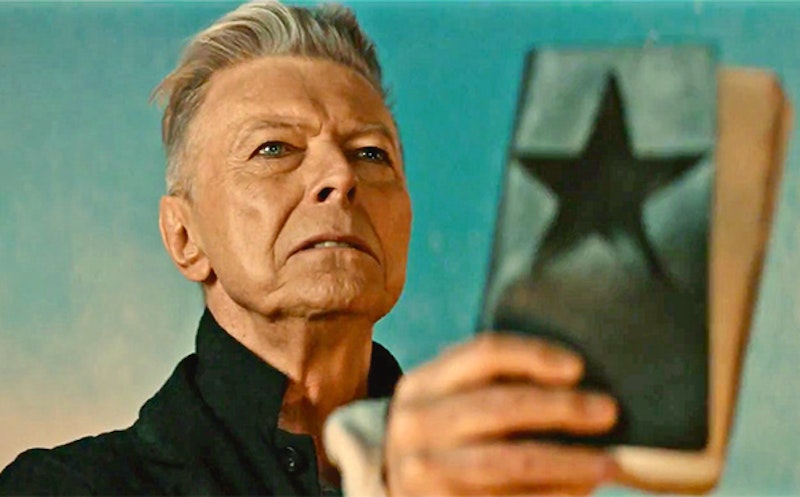 Is David Bowie dead? This was my theory, ever since he released The Next Day in 2013 after a 10-year hiatus. The lead single, “Where Are We Now?” practically screamed “I have Alzheimer’s,” and the album cover, which was just the cover of “Heroes” with a big white square cut out of the center with The Next Day written in simple black Arial font, like a bad Photoshop joke, suggested that something was seriously wrong with the reclusive singer, who hadn’t toured or even appeared in public in years. The Next Day was staid and forgettable, furthering the image of someone lost in old age, failing health, and fading memories. The museum exhibition David Bowie Is felt like a posthumous affair, a collection of artifacts over a career without another chapter.

Is David Bowie dead? Not even close: he’s shot out of a cannon. His latest album, Blackstar, out today, goes beyond all expectation and at last renders the superlative “his best since Scary Monsters” irrelevant and obsolete. The question now “Is it better than Blackstar?” This is a ridiculously brilliant return to form that proves Bowie is back in the best way: staying off the road and out of the spotlight to make as many more crazy records as he can before he croaks. Bowie turns 69 today, and by the sound of Blackstar, he has a few more great records to come in the latter portion of his life. The hype began in earnest with the release of the music video for the title track in November, a disturbing and mesmerizing visual featuring the singer debuting another character and set of aesthetics, long after most thought he was done moving forward. The song “Blackstar” is a beguiling and strange 10 minutes, but full of hooks and a compelling arrangement that never approaches dull. Bowie’s vocal on the song is one of the most vulnerable of his career, and not in the confused old man mire of “Where Are We Now?” Bowie is the captain of this dark star, backed by long time producer Tony Visconti and a crack team of players like Jason Lindner, Donny McCaslin, Mark Guiliana, Ben Monder, and Tim Lefebvre.

The production and playing here is immense, often breathtaking and full of moments that made my eyes go wide and wet—the harmonizer/chorus effect that makes Bowie’s voice warble and wave in the “aaahhhh-aaaaaaaahhhh’s” on “Blackstar,” the restrained use of phaser later on in the same song, the Robert Fripp-esque solo that closes at the record on “I Can’t Give Everything Away,” the modulated bass line on “Girl Loves Me,” and all the glitchy programming applied within the pocket of Guiliana’s impeccable drumming. Of course, even the deftest production can’t save lousy songs—and this is what pushes Blackstar beyond a noble late career effort and into something that stands with the best of his 1970s work.

It’s been mentioned that its closest relative might be Station to Station, and the comparison is apt: both are black holes full of despair, dysfunction, occultism, long songs that never get boring, and pop hooks in places you’d least expect. “Dollar Days” is a beautiful song, anchored by breezy acoustic guitars and a deeply moving vocal melody and performance from Bowie. As on Station to Station, he’s communicating from the bottom of a well, sending out distress calls and messages from a place you can’t come back from. In 1976, it was promiscuous cocaine consumption, and as terrifying as addiction is, it’s pretty cut and dry, and thoroughly explored in rock music. It’s not entirely clear from what dark place Bowie is coming from on Blackstar, but there’s at least a year to figure it out.