It may have been manufactured by an off-brand of Fisher Price. 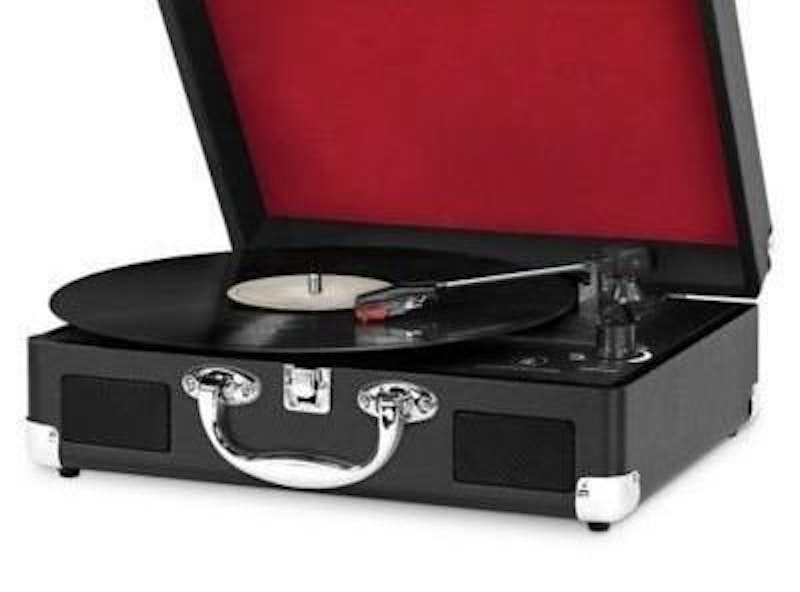 I don’t expect the comforts of home during Christmas. The house I return to isn’t the one I grew up in. It’s my mother’s home, which is surrounded by the wrong type of trees.

Beyond these trees the only thing that could be looked at as remarkable is a swimming pool watched over by stone angels. Inside her home there’s an impeccably selected set of furniture tailored to the size of every room. The centerpiece is a curio of objects collected from years of traveling both streets and airport lobbies. These objects are the result of a fastidious archaeology of someone else’s past. They are as deeply personal as they are impersonal.

It’s hard for me to find common ground with a porcelain figurine frozen mid-pirouette. However, over the years I’ve come to find that my mother does possess an interest in modern culture. There was a time while driving her car that I turned on the CD changer and found a Blue Oyster Cult rarities and B-sides disc. I pointed out a specific guitar sound to her. It was a Mutron biphaser. She mouthed the “Mu” repeatedly. I imagine that she repeats this to herself during silent moments when no one else is around.

These conversations with my mother about records and musical trivia attempt to impose a sense of familiarity that I feel is lost to me as a passenger. They’re a traversing of vast terrain that can go on for hours. I understand the cartography of this alternate universe much in the way that my mother understands the cartography of her curios.

When Christmas came this year I’d prepared her gifts in advance. Packed away in my flight bag were several vinyl reissues, but there was an unexpected snag in this plan. I soon discovered that my mother’s record player was not in working condition. It’d been dead for months. The turntable itself was an add-on to a junky CD/tape deck. Two days before Christmas all was quiet in the house while I removed it to a trash pile.

This might have been more of an issue but I was able to scramble to a big box store off of a few remote highways in Florida. Best Buy had a better price on turntables but was nearly an hour away. Target was closest to the nearest Chic Fil-A so that won. There was a sale on turntables. On the box I picked up was a photograph of a retro suitcase style turntable. Inspecting the image made me suspect that I was looking at something that was possibly manufactured by an off-brand of Fisher Price with wood that was found left over in one of their warehouses. I found this charming. Too bad I didn’t find a tambourine and a pair of knock-off Ray Bans inside the box.

Upon arriving at her home I packaged the box with ribbons, careful to tape the inseams of the creasing to mimic a tape-less appearance, and put it under the Christmas tree. It was worth getting the box packaged properly to hear her enthusiastic comments. She hadn’t expected an extra gift under the tree. Her joy briefly turned to silence when she saw what it was. Unbeknownst to me, she’d owned a record player in a similar color and style when she was younger. She’d saved all of her money to buy it and the handful of Beatles records that were now gone. Though the gift was for her, I view it as a gift for the both of us. Whenever I return to visit her the house will now feel a bit more like home.