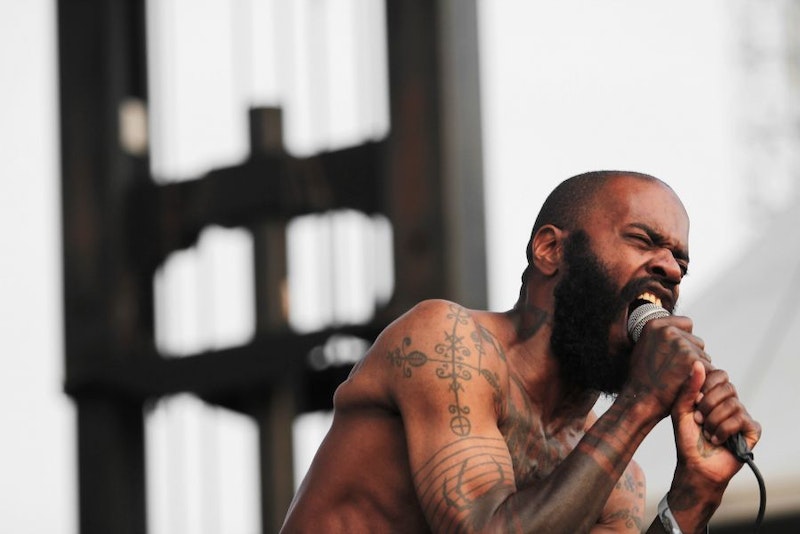 By virtually unanimous consensus, Kendrick Lamar's To Pimp a Butterfly was the best hip-hop album—and for that matter the best album—of 2015. It's easy to hear why; To Pimp a Butterfly is hugely ambitious, and very aware of its status as a critical knockout punch. Lamar riffs on past greats, from George Clinton to Prince to Ornette Coleman. He all but screams, "You are listening to an important album!"

My own favorite hip-hop artists of this year, though, come at greatness a bit less directly. Death Grips' The Power That B, at two discs and 18 tracks, is a sprawling statement. Where Lamar locates hip-hop in the canonical R&B tradition, Death Grips instead sees rap as a joyfully demented pomo packrat, consuming culture and spitting out broken, abrasive kaleidoscopes.

The first disc, titled Niggas on the Moon, is a sort-of collaboration with Bjork; her vocals are sampled and turned into mangled percussive squeaks and bleats on each of the eight tracks. The result doesn't sound anything like Bjork—but at the same time, it draws a connection between the singer's impressionistic pixie washes of sound and hip-hop's vivisected bricolage. Bjork is a touchstone for current R&B performers like FKA Twigs and Kelela, so there's something just right about having her turned into a fractured rhythmic throbbing cyborg backing for hip-hop. "Sticky psyche touching so many/Sensory dripping, dripping, splashing, happening," MC Ride spits out. It sounds like Bjork's leeching out of his brain, as hip-hop eats indie pixie music, and/or vice versa.

Jenny Death, the second disc, jumps from sincerely smashing indie to tongue-in-cheek rock. "Turned Off" has Ride "smoking cigarettes in the shower" to a sneeringly sampled guitar squall.  "Beyond Alive" is cyborg arena rock, with Ride shouting "cowards we know who you are" while the repetitive riff swaggers and blasts, Pearl Jam hit in the head with an anvil and then shot with lasers. It's glorious and ridiculous. Who says a hip-hop band can't tear rock limb from limb while giggling?

Death Grip is hyperactive and eclectic; Atlanta rapper Father is  the opposite of those things. Who's Gonna Get F****** First? is thoroughly stoned and consistent. Father keeps in one, blank, head-nodding groove as he raps about sex, being cool and smoking dope. "Highway 101" is perhaps most characteristic in being even slower and sparser than the rest of the tracks; over a beat that sounds like it's been pumped full of Quaaludes and novocaine, Father talks with no apparent irony about "a black leather cycle that took off like a gun" and then speeds up slightly to outline a typical battle of the sexes ("she don't love me she in love with the chase; she hates my soul she's in love with my face.") The tracks slide into each other without a glitch, the tempo barely moving from the tranced-out numbers to the slow-shake "Everybody in the Club Get Shot."

"I'm dressed and distressed/all black, all black cause I ain't got time to match," Father mutters in a characteristic line. He doesn't want to send up pyrotechnics like Death Grips; he's content to just be hip-hop. Lamar positions himself as the next step in hip-hop's critical apotheosis, the next in a line of smart, ambitious, daring soul. But it's worth remembering that hip-hop is also great when it's weird, just leans back and is itself.