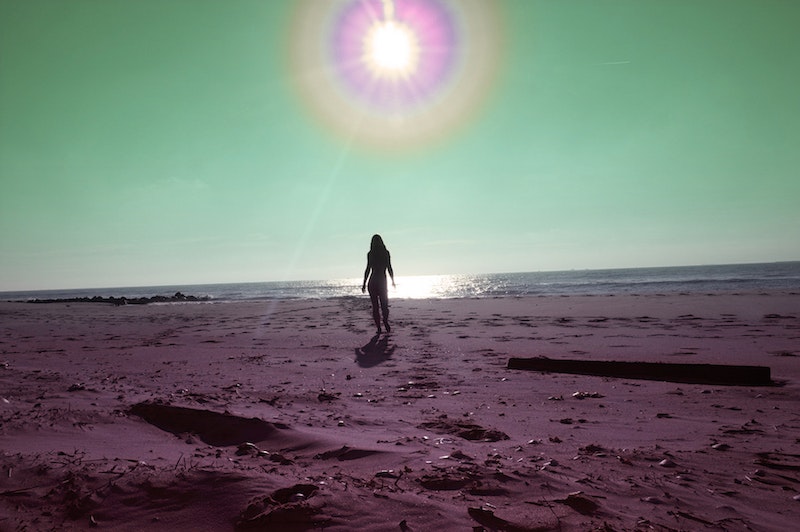 What sort of music would you make if you were a hippie gnome? You'd figure it’d be open air, natural trilly music, on flutes made out of twigs and tinkling bells made out of flower petals. Fairies dance beneath the dewdrops and perform enchanting songs without the benefit of electrical outlets or artificial sweeteners. That's the traditional way of the Renaissance Faire, and so it’ll remain.

More and more, though, the gnomes are refusing to follow the all-natural, gluten-free script. Nowadays fey insular fairie music all seems to be made on the laptop. Puck has cast aside his lute for software and his pan pipes now go, bleep bloop.

Take two of my favorite albums from last year: Eartheater (Alexandra Drewchin)'s RIP Chrysalis and Elfmilk's Relocation. Just looking at the titles and the band names, you can see that the artists in question are aggressively feral moon children, who spend their days staring at a dandelion saying, "Whoa." You've got earth, chrysalis, and the rather disgusting image conjured up by elfmilk. Does anyone doubt that these two musicians have spent way too much time contemplating hobbits?

But no hobbits could make these records, unless they were electric hobbits with special digital toes. RIP Chrysalis's first track, "Utterfly FX,” is a shimmering dewdrop of binary video game noises and weirdly distorted multi-tracked vocals—it sounds like water nymphs drinking cough syrup while getting chopped and screwed. "RIP Chrysalis" starts with a violin folk tune and acoustic plucking interrupted by the occasional space alien ray and transporter shimmer. The chrysalis appears to be transforming from a caterpillar into a hyperdrive. "Metamorphflexible" abandons any pretense to actual real life human sound, moving into full on throbbing ambience that over headphones (surely the preferred listening method) comes across like a layered, rapid-fire battery of hearing tests. Put your ear to the flower, and you’ll hear the mermaids dancing like electrons.

Elfmilk's sound is perhaps even more unexpected—unless the word "elfmilk" calls to mind wobbling space lounge music, which maybe it does, what do I know? "Gravitational Collapse" is built around romantic plangent trumpet lines beneath which robots dialogue about the space freighters and how even artificial life forms would like to be Miles Davis. "Oblique as One Thousand Candles Burning an Empty Wooden Box" is such a long title it veers into fuzak. The track is strutting honking jazz with sweaty keyboard flourishes and dissolving feedback around the edges—the elves are cool, and they can’t even see their own milk for the sunglasses. "Sound As Destructed Light" is a woozy slow sway, with some bored loser rambling on about the cosmos. Tom Waits has been trapped in a prog-rock concept album with the wrong medication.

So why reference Midsummer Night's Dream if you're going to make music like you're camped out in a droid skull or whooshing towards the other side of the universe via Arthur C. Clarke's obelisk?

That last one answers itself; the New Age hippies come in sci-fi as well as fantasy flavors. The idea of nature is a moving target; a moog isn't really any more artificial than a harp, and the magical otherworldly weirdness from outside of space and time could just as well sound like space invaders as acoustic plucking. Psychedelia has always involved finding a route out of the universe through the kaleidoscope in your brain. And once you're way, way out there, what does artificial or natural really mean anyway, man?

Elfmilk and Eartheater weave a tapestry in which the druids swoop about on rocket packs and every buzzing bee wallows in cybernetic honey. We've reached that future pass where the earth mothers are cyberpunks, and vice versa.