The life and losses of Robert Lloyd and the Nightingales. 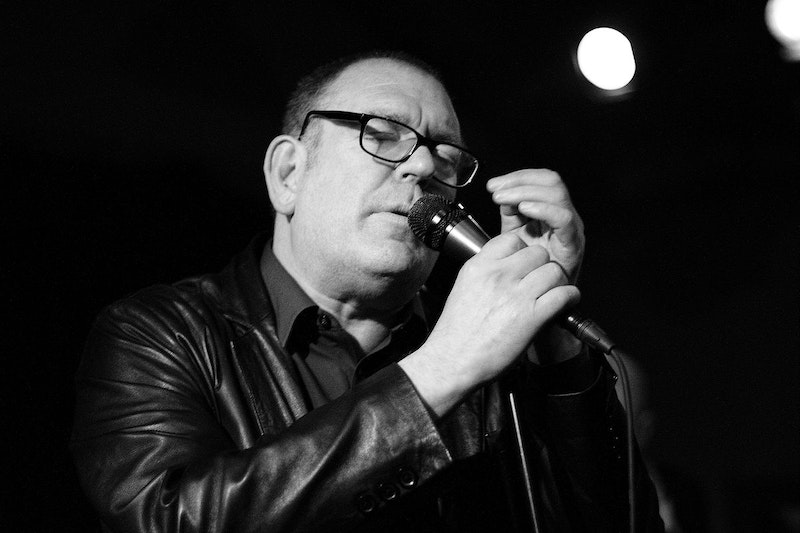 As a teenager in the 1960s I listened to John Peel’s program, Top Gear, on the BBC. Sunday afternoon was a ritual for me. I did my English homework in the kitchen with the radio on, while the rest of the family were in the living room, watching old movies on TV.

Peel’s taste in music was eclectic. He played a lot of what was called underground music at the time—West Coast psychedelia, British progressive and folk-rock—and was influential in the success of such bands as T. Rex, Pink Floyd and the Soft Machine.

Later, in the 1970s, he took up the cause of punk rock. Fast-paced, stripped-down, raw, iconoclastic, this new music exploded onto the airwaves with the force and unexpectedness of a roadside bomb. It was insurrectionary music. The old progressive bands sounded stale by comparison. Extended guitar solos gave way to the three-chord thrash, whole album operatic complexity to two-minute singles, and high-minded spirituality to colloquial expressions of working class, urban, everyday life.

Peel was renowned for picking favorites. In the psychedelic era it had been Captain Beefheart. In later years it was the Fall and the Undertones. And one other band that escaped me at the time. This was the Prefects, later to morph into the Nightingales. It’s taken me 45 years to catch up.

The Prefects were formed in 1976 in Birmingham, in the West Midlands. They were Birmingham’s first punk band. Famously they supported the Clash on their White Riot tour of 1977, where, appropriately, they clashed with Bernie Rhodes, the Clash’s manager, who called them “amateur wankers”: a name they subsequently adopted for their only LP. They did two sessions for John Peel’s program, and released one single, Going Through The Motions, in 1979. By then they’d already broken up.

John Walters, Peel’s long-term producer and collaborative partner, tells a great story about the difference between the progressive era and what followed. He said that in 1977 he went to see Genesis. After about 20 seconds he thought wearily, “I wish this would stop,” but he knew that the song would go on for the next 40 minutes at least. By contrast, he says, “When we went to see that Clash concert, with the Prefects opening... they did an 8 second number for a start.”

They leapt on stage and introduced themselves in their heavy Brummie accents, after which they announced the first song. It was called “I’ve Got VD.” It consisted of a Ramones-style countdown, and then an explosion of raucous guitar and drums with the lyrics, “I’ve got VD” shouted repeatedly, before a catastrophic crash at the end. And that was it. Over and done in 13 seconds.

“Oh great,” thought Walters, “I can get home in time to see some television.”

The Prefects were punk by persuasion, but not appearance. Early punk had no particular style. People dressed however they wanted: sometimes provocatively, sometimes cheaply, sometimes absurdly. It was only later that a uniform developed and everyone started dressing like Sid Vicious, with spiky hair and leather jackets. The Prefects were deliberately anti-fashion, still wearing their old school uniforms and mum’s knitted pullovers by the looks of the photographs. Meanwhile the argument with the Clash brought it home to them that there was a strict hierarchy in the punk pantheon, and they weren’t going to be included.

“I thought we were part of a movement,” says Robert Lloyd now. “The disillusionment I got in those five days saved me a lot of time.” Lloyd is the one consistent figure in the band. He fronted the Prefects in the 70s and then their post-punk successor, the Nightingales, in the 80s. That lasted until 1986. There was a brief attempt at a solo career, after which he disappeared for more than a decade, only to re-emerge again in 2004 with a new Nightingales lineup.

Recently they were the subject of a Stewart Lee documentary, King Rocker, released on Sky Arts in February 2021. It was here that I finally caught up with them.

Several things resonated with me immediately. Lloyd’s from the West Midlands. He’d had a career in the media which faltered. He’d spent a number of years outside the industry, living an uncelebrated life. He’d been a postal worker, not unlike Charles Bukowski in this respect. He’s a drinker. He’s working class. He’s a gambler. He writes words that are both down-to-earth and profound. He’s informed by the rhythm of the streets and has managed to keep his integrity. Many of his post-punk contemporaries have fallen boringly into pomposity or populism. Lloyd’s remained resolutely himself.

The revived Nightingales have been going for 16 years now and managed to build up an impressive body of work. There are 11 albums, eight EPs and 15 singles, containing maybe 200 songs. There have been numerous changes of personnel, but the current lineup seems fairly stable. It’s Andreas Schmid on bass, Fliss Kitson on drums, and James Smith on guitar. The songs vary in style and form, from urban-country to proletarian Krautrock, with a dash of Beefheartian chaos thrown in. There’s a disdain for what Beefheart referred to as “big mama heartbeat,” that reliance on a regular 4/4 dancing beat that imprisons most bands in conformity. Time signatures shift erratically. The music’s simple but unique. Like all the great artists, it only takes a few bars before you know you are in Nightingales territory. This is despite the fact that no two songs are alike.

It’s held together by Lloyd’s fragmented, wayward lyrics. From the beginning this is what made them stand out as a band. He has an ear for the poetry of everyday speech. Like T.S. Eliot in The Waste Land, much of it is borrowed from overheard conversations. Unlike Eliot, it’s often funny.

Take this for example: “Must get myself a box of matches was a song made famous by Frank Sinatra. A classic in its time, that’s come again, adopted by the new wave of smokers. A mature old wheezer, smouldering geezer, recall him as a fag you’re lighting. But a well known doctor is informing, be careful what you put in writing. The fruit machines are all regulated, the beer drink’s nearly all water, and modern film just goes down hill, well I’d better lock away your daughter. It’s pure shit to dismiss it, to make your own choice in life’s Indian. Meat madras and boiled rice is nice, but remember that’s only my opinion.”

It’s an a cappella number called Only My Opinion, from their second LP, Hysterics, released in 1983. The first line was overheard in a pub. A second character made a comment and Lloyd made a song from that. The rest is made up of descriptions of the man (“mature old wheezer, smouldering geezer”) and further snippets of conversation from the same pub session. The funny thing is that he misheard what the man had said. He was referring to “These Boots Are Made For Walking” by Nancy Sinatra—not Frank—with its line “I just found me a brand new box of matches.” Lloyd had always thought that the man was deranged, when, in fact, he’d been making a legitimate observation.

There’s a montage quality to the lyrics, of found objects plastered onto canvass to make a pleasing picture, but the lines are witty, self-depreciating, world-weary and occasionally profound. Try “Black Country.” It’s a country & western ballad, set in the region adjacent to Birmingham, known as the Black Country because of its association with an historic coalfield which blackened all the buildings. It was where the Industrial Revolution started. The song is replete with double-edged lines of heart rending complexity. It’s not clear if Lloyd is singing about himself or someone else. Probably both. It’s ambivalent, regretful, sad and honest at the same time. Here’s a man telling you the truth, and he doesn’t care if you want to hear it or not. It’s written as a kind of purging, like an emetic for the soul. It’s real and unforgettable.

King Rocker is a funny, affectionate, warm-hearted documentary about Robert Lloyd, the man, and the remarkable band he fronts. Lloyd and Stewart Lee laugh a lot in the film, but there’s an edge of melancholy too. At one point he talks about the way his career took a nosedive in the 1990s:

“I thought I was good and I felt unloved... it was like, ‘nobody’s interested in me...’ I just thought, ‘nobody believes in me...’ I’m not pathetic. I don’t think the whole world’s against me or anything like that… but… you lose heart. Man oh man, I’m beating my head against a brick wall here. But then it’s all a kind of nonsense. We’re not fucking homeless. We’re not sleeping on the street tonight. I never forget how shit it is for some people. ‘Woe is me, I can’t get a record contract.’ Fucking shoot the cunt.”

You’re left with the impression of a man who has lived a life. He’s been battered and torn, but for all its hurt and discomforts, he’s retained his humor. He’s not lost that spark of inspiration, that vision that motivated him at the start.

—For all Nightingales music and merchandise go to https://thenightingales.org.uk/