The spirit of Captain Beefheart is haunting our town. 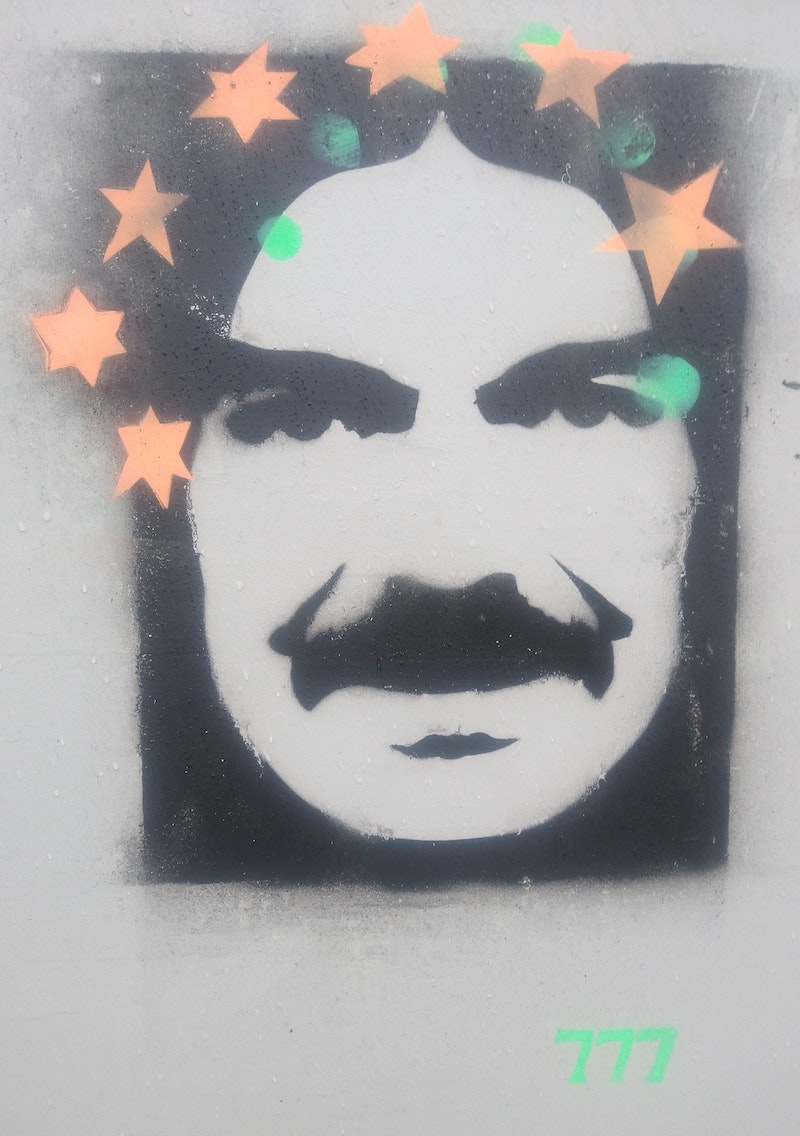 Tankerton, a small suburb of my home town of Whitstable, sits on the North Kent coast overlooking the Thames estuary. It consists of a promenade, a shopping street, and a late-19th century housing estate of gridded streets. The population is overwhelmingly white (98.7 percent) with a significant number (22.3 percent) of retired people.

I often go there to take my sister’s dog for a walk. It was on one of these afternoon jaunts that I first caught sight of it, on a side street, on a whitewashed stretch of wall: the spray-painted portrait of a man with a moustache, a halo of stars and moons, and the single word “Adapter” floating nearby.

I probably would’ve recognised the face anyway, but it was addition of that out-of-context word which confirmed the man’s identity for me. The face, I knew, belonged to Don Van Vliet, better known as Captain Beefheart, a singer/composer from the 1960s to the early-80s, and the word was a reference to his song "Dropout Boogie," from his debut album Safe As Milk, released in 1967. The word “adapter” is repeated 12 times in the song and is so insistent as to be almost like a chorus.

Later I passed another spray-painted image of the Captain, and later again my brother-in-law directed me to a third. There may be more. In each case there are words or numbers attached. In one it’s the number 777. In another, the name Nick Knox. I thought at first that that must be the signature of the artist, but it turns out that it’s also the name of the drummer in the Cramps.

After that I wrote an article for my local online magazine and put up a post on Facebook asking people if they recognized the face. Many suggestions were put forward, including Burt Reynolds, Roy Wood, and Borat. Not many people got it right. That’s the thing about Beefheart: to those of us who know him he’s an almost mythical figure, up there with the greats of 20th-century music; but to the vast majority of people he’s completely unknown.

He’s very much a man’s musician. Many men idolize him. Women generally find him unlistenable. If you want to clear a room fast, just put on Trout Mask Replica, his legendary 1969 album, produced by Frank Zappa, and released on Zappa’s Straight label. I’ve seen people run screaming for the door after less than 10 seconds of “Frownland,” the opening song on the album, with its harsh chords, strange melody, cacophony of clashing time signatures and rasping, unfathomable lyrics.

On the other hand there’s an analysis of that same song on YouTube, by composer Samuel Andreyev, who says of the album that “If you are a music student and you haven’t sat down and listened to this entire record at least four times, then your musical education is woefully inadequate,” adding that “it is an amazing, amazing achievement.” Andreyev’s analysis lasts for 31 minutes and 50 seconds. The song itself is one minute and 41 seconds long.

My own relationship with Beefheart goes back to Safe As Milk, which I first heard on John Peel’s weekly Top Gear programme on the BBC. That would’ve been in 1967 or 1968. I was 14 years old. John Peel had recently been recruited from Radio London by the Beeb for the launch of its Radio 1 pop channel. To this day Peel remains probably the most significant influence on British independent music, helping to launch the careers of David Bowie, Marc Bolan, Pink Floyd, and a host of other luminaries of the underground scene in the UK. He was also a champion of West Coast American music, including Captain Beefheart.

Listening to Top Gear on a Sunday afternoon, while doing that week’s English homework, was a ritual for me. We had this big old, dark wooden valve radio on a shelf in the kitchen, with a hefty speaker under a glowing dial that could really thump out the bass. I’m not sure which of the tracks off the album I heard first: either “Dropout Boogie” or “Electricity.” They’re equally startling, as is the whole album, which I bought with my earnings as a cycle delivery boy. Needless to say that repeated word “adapter, adapter, adapter, adapter” drilled itself into my 14-year-old brain and has remained there ever since. My Mum, on the other hand, hated it, and I was banned from ever playing the record if she was in the house.

I’ve owned copies of all of Beefheart albums in my time. I can’t say I liked Trout Mask Replica. That was too difficult even for me. But I heard a track from Lick My Decals Off, Baby, the following album, over a titanic sound-system as an accompaniment to a Theatre of Cruelty dance troop in the early-70s, and it sort of pounded its way through my brain and out the other side, leaving a tunnel there.

The track was "Space-Age Couple." I was experimenting with LSD at the time and interpreted the lyrics as a call-to-arms for the impending psychedelic revolution that was even now knocking on the door of the awakening World Consciousness.

I imagined the “magic muscle” as some sort of secret power that lay dormant in the souls of human beings, which could be activated by a strong dose of mind-altering chemicals. As for the “cool tom-foolery” and the “nasty jewellery”: these were indicators of the dreaded ego, which I was trying hard to abolish, with all the attendant damage to my mental health at the time.

Beefheart was already warning people against the use of drugs, claiming that he never took them, but this is clearly belied by songs such as Ah Feel Like Ahcid from Strictly Personal with its opening lines:

Got (a letter) up this morning how do you reckon it read?
Red blue and green whoooo all through my head
Licked the stamps saw a movie dropped the stamp
I ain’t got no blues no more I said

Sometimes you didn’t have to believe the public pronouncements of your heroes, you just had to listen to the lyrics.

Beefheart’s music has accompanied me throughout my life. Like every other fan, I enjoyed Mirror Man, The Spotlight Kid and Clear Spot, but scorned Unconditionally Guaranteed and Bluejeans and Moonbeams as too commercial. I celebrated his return to form with his last three albums. I went to see him live during his last tour of the UK—at York University, November 17th 1980—and was indelibly impressed. He’d lost none of his magic.

He retired in 1982 to take up a full time career as a painter, something that gave him a steadier income than music. It’s not often that rock stars become artists, but Beefheart—returning to his original moniker of Don Van Vliet—managed it. You might say that’s because he was always an artist, it’s just that he painted with sound.

There’s nothing pedestrian about Beefheart. He was an old friend of Frank Zappa, and like him, schooled in a wide range of different musical styles, from avant-garde to electronic, from raw blues to free jazz, elements of which he brought into many of his compositions. He scorned repetitive 4/4 time as infantile, referring to it as “big mama heartbeat.”

He was also in love with bass. Almost everything he did was laid on the back of a huge, cavernous bass line, deep enough to bury itself into your soul. And his voice too: that could go deep. Deep and animalistic, like the bellow of some antediluvian sea creature, low enough to rumble your guts, but intersected by these weird high-pitched shrieks and screams, piercing enough to rattle your teeth. It was never singing as such. It was much more like an invocation of forgotten gods, a ritual of time in the Temple of Eternity.

How he ended up as graffiti in sleepy old Tankerton is another matter. I like to think it was magic.

Beefheart was renowned as someone who had psychic abilities. Stories abound of him anticipating phone calls, or knowing someone was going to visit before they arrived. In one case he was able to describe someone’s physical appearance on the back of a telephone conversation. Greil Marcus, who met him in 1970, describes him as having shaman’s eyes. It’s not clear if he ever engaged in occult practice or not, but there are hints of it in his songs. An early demo is called Obeah Man:

You know the magic happens about the midnight hour

People on the inside knows ‘bout my secret power

All the wicked places of all the lover’s hearts

I have my hands on the creatures of the dark

Obeah is a system of West Indian spell-casting similar to voodoo. There’s at least one other reference to it in the Beefheart canon, in a wonderfully strange and evocative little poem called Golden Birdies, from the Clear Spot album:

Those little golden birdies look at them

And the mystic Egypt tossle dangling down
Old sleeper-man Shish, don't wake him
Up one hand broom star was an obeah-man
Revered throughout the bone-knob land
His magic black purse slit creeped open,
Let go flocks of them

As with everything Beefheart wrote, it’s difficult to figure out what any of this means, if anything at all; but you’re left with the impression of something archaic and supernatural going on, as if the strange concatenation of syllables amounts to an invocation of some kind. It’s the same with the graffiti. The addition of the number 777 to one of the portraits suggests that our graffiti-artist was practicing ritual magic as well as listening to Beefheart songs. One of Aleister Crowley’s books is called 777 and Other Qabalistic Writings.

So I like to imagine our shaman-artist engaged in occult services in a quiet Tankerton side street, and managing to connect with the spirit of Captain Beefheart during one of these late night sessions. Maybe it was this that led him to create the stencil and to go out after dark tagging Tankerton with the image... and it was by this means, it seems, that he has been able to summon the Captain back from the dead.

Last week I was woken up by the sound of “Autumn’s Child” from Safe As Milk running through my brain.

Go back ten years ago, sunbeams dancing round

Go back ten years ago, sunbeams dancing down

That sparked a memory. When did he die exactly? I looked it up and it turns out that December 17th 2020 marks the 10th anniversary of his death. It’s like he is knocking on the door of life once more, demanding to be heard.