Best of Baltimore A Go Go

Dome Records’ Baltimore’s Teenbeat A Go Go was a standout in a flood of regional "sampler" albums. 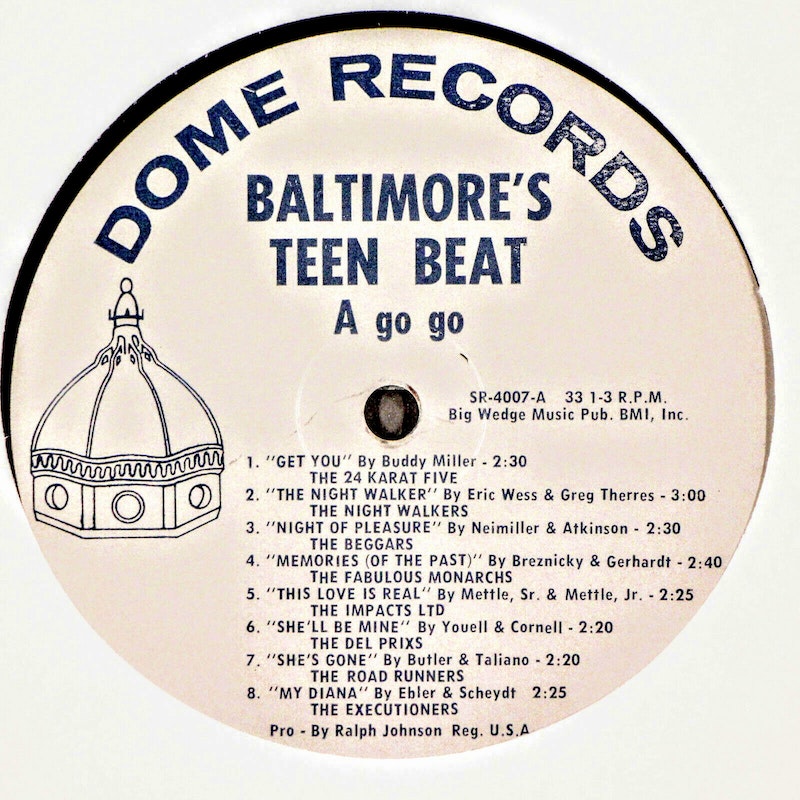 Among the glut of vintage regional sampler albums, Dome Records’ Baltimore’s Teenbeat A Go Go was an evocative standout. Documenting greater Baltimore’s 1960s DIY music scene, this collection presented some of the best teen rock groups and early indie music acts. These artists didn’t want their music spattered with the album’s untamable distortion, compression, and tape hiss, but they also made no effort to avoid them. From the 1950s into the 1970s, lo-fi sound reflected the primitive state of recording technology and the low-budget modus operandi often utilized by artists at the local level. Beyond simple purposes of self-promotion, for early indie artists making a record was an emotional commitment. Concerns over sound quality were an afterthought.

The 24 Karat Five were one of the few non-Baltimore area acts to appear on this album. They hailed from Odenton and Severn in Anne Arundel County, 30 minutes away from Mobtown and an hour east of DC. Like a few other acts on the record, an appearance on Teen Beat was awarded to them as a prize after they placed highly at a Battle Of The Bands competition. “Get You” is a propulsive jolt of garage folk rock. Its blend of aggressive rhythms, desperate lyrics, and chiming melodies is a great introduction to the diverse DelMarVa pop/rock sound circa the mid-60s. The Five get bonus points for copping this song’s bass line from 1963 afro-punk screamer “The Girl Can’t Dance,” a single cut by their southern MD neighbor Bunker Hill.

Common lyrical themes found in 1960s teen rock songs involve touring, traveling, and leading an unpredictable lifestyle. These emerged as a reaction to the dull/routine nature of suburbia and ambitions of global music fame. “The Night Walker” is one of the most imaginative of these naive travel fantasies. The narrative comes to life as eerie organ entwines with an abrupt tempo shift and kinetic surfy guitars and drums—the aural equivalent of kid firing up a ’66 Mustang and heading off into the sunset. Vocals and melodies alternate between noir-ish impressions of a city after dark and the defiant independence of a nomadic artist.

The Night Walkers came from northeast Baltimore. They gigged throughout the scene there from 1965 to 1969. Members included vocalist Greg Therres, drummer Eric Wess, keyboardist Joe Ercole, guitarist Larry Makowski, and bassist Billy Yanick. As Therres noted in a late-1990s phone interview, The Night Walkers eventually broke up because they “grew out” of the band’s music. Some former members remained active in later years with Ercole’s new wave pop band The Pedestrians, the only post-Night Walkers group to release any vinyl. Jeremiah was an organ-driven 70s hard rock band featuring Therres and Makowski. They recorded a crushing live rendition of Spencer Davis Group’s “I’m A Man” while playing a gig in the early-70s at a place called The Five O’Clock Club. This recording wasn’t released publicly until 2016.

The Night Walkers’ Greg Therres apparently met this group at a Baltimore area band battle concert. He remembers that The Beggars came either from somewhere around Carroll County, MD or even further west in the state. In the 1960s Carroll County was dominated by farms and small rural communities and viewed by many as a gateway to Appalachia. The fact that any kind of 1960s rock band existed out in these remote farmlands is pretty amazing. The band’s only known track is a violent/sax squonking/Link Wray-blasted pounder bearing the suggestive title “Night Of Pleasure.” On the Teen Beat LP’s label writing credits for The Beggars’ tune are attributed to two names: “Neimiller & Atkinson.“ Does anybody know exactly what gang of young toughs can be held responsible for roaring out this essential slab of dissonant riff-driven primitivity?

The Fabulous Monarchs—“Memories (of the Past)"

Fran Breznicky, Ronnie Breznicky, Joe Farace, and John Gerhardt were The Fabulous Monarchs, the greatest folk rock combo to come from Parkville, Md. Their mournful “Memories (of the Past)” is a work so powerful that Dome released it twice. It came out on a 7” where it featured anthemic vocals and loud rockin’ drums that gave it a tough-but-tender feel in the vein of The 24 Karat Five, Catonsville’s Human Freedom & Security, or Bel Air, MD’s Sodom & Gomorrah. As great as that single is, the rendition they cut for Baltimore’s Teen Beat A Go Go is even better. Its drums are quiet, the recording is a little more lo-fi, and the vocal harmonies are downright grief-stricken. The lyrics say it all: “You’re all I see at evening’s dusk/I shouldn’t cry/But I must.” This tune’s poignant atmosphere is more akin to the eccentric ballads of the UK's early DIY/private press scene than anything from the American pop canon.

The Fabulous Monarchs eventually became The Monarchs Band and worked backing up Baltimore vocal group The Chryslers. Augmented by a brass section, their collaboration was preserved on a glossy generic pop-soul 45 released by the Jody label. In 1969 keyboardist/songwriter Fran Breznicky was drafted for Vietnam at which time The Rysing Suns’ Steve Boyle replaced him for a year. The group broke up sometime around 1970. Monarchs’ guitarist Farace then garnered modest fame after recording a pair of raw early-70s acid rock LP’s with The Orange Wedge. Both of these cult artifacts have stayed in print for nearly as long as Baltimore’s Teen Beat A Go Go.

The Impacts Ltd.—“This Love So Real”

There’s no nice way to say it: this dopey ballad and its counterpart—side A’s closer “My Diana” by The Executioners—are the worst songs on the album. The Impacts Ltd. and The Executioners put barely any emotion into their songs. Both tunes have an early-60s/pre-Beatles sound and dorky cha-cha rhythms that were moldy.

The Del Prixs—"She'll Be Mine"

Epitomizing the term “teen garage rock” and representing the weird subtlety that would later become synonymous with New Zealand’s Flying Nun Records, Glen Burnie, MD’s Del Prixs quietly rocked out to the beat of their own drummer on the primitive yet wistful love song “She’ll Be Mine.” Imagine if The Ramones never did drugs, never used distortion, never played through big amps, and barely knew any chords and you’ll be close to grasping the understated charm of this flawless outsider rock gem. (The full story behind The Del Prixs’ brief moment of glory will soon be shared with the world, please stay tuned!)

This Baltimore group were one of the earliest bands to feature local legend Don Wimbrough. Along with Alona Shor and members of fellow Dome Records act Summer’s Misfits, Wimbrough would form the classic line-up of Paper Cup, one of the most popular Baltimore bands of the 1970s. Their radio-friendly power pop sound ruled Baltimore for the better part of 20 years. Before exemplifying the bell-bottomed/polyester strains of DelMarVa rock, Wimbrough and The Road Runners crafted the brooding song “She’s Gone.” How the track ended up on this Dome comp. remains unclear, but it’s a crucial example of garage rock at its most gothic. If you love the moody drama of “She’s Mine” by The Beaux Gens, The Velvet Underground’s “Here She Comes Now,” or early Zombies hits, “She’s Gone” will definitely be your top Teen Beat pick.

(See notes for The Impacts Ltd. track above.)