The Correct Answer Is Not “Love” 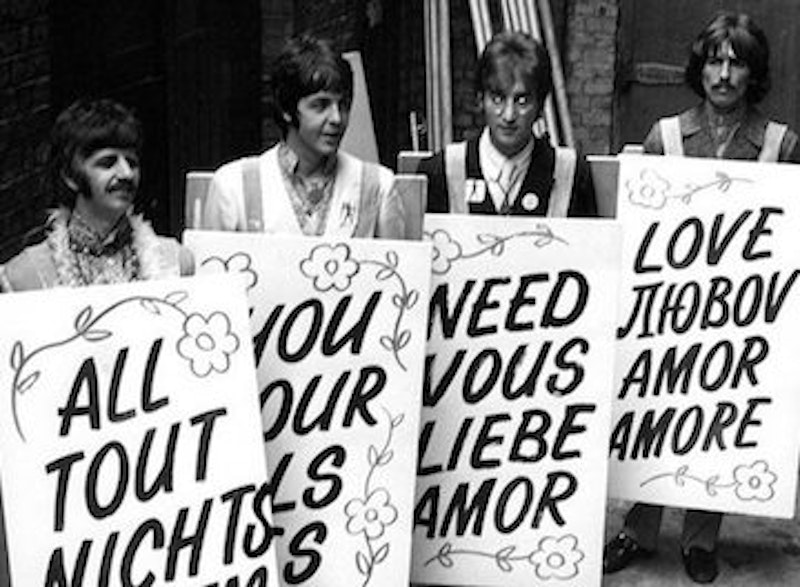 After listening to the Beatles for a quarter-century, I realized it was time to ask one basic question about them. This question, which I’d avoided for decades, is usually easier to answer: what, exactly, do their songs have in common? If you ask that about Led Zeppelin, the answer comes to you at once. Led Zeppelin songs are epic, tortured, awkwardly male, and bluesy. Mariah Carey songs are a shameless compilation of every backdrop her producers could dream up for her breathless, operatic voice; there are flights of angels (“Always Be My Baby”), and spy-movie guitars (“Honey”), but the sensuality is identical. Even an artist with range, like Bruce Springsteen, puts his trademark energy and blue-collar broad strokes into everything he does. Only the Beatles defy such categories, as Chuck Klosterman wittily observed, and still manage to sound like themselves. The adjective they left behind, “Beatleseque,” either refers to a tiny fraction of their output (their middle period, basically)—or else to something far more elusive, and worth finding.

When I started collecting The Beatles, as a high school student working odd jobs, they were the only band with a catalog I wanted to own in full. I remember telling one friend that I needed the money for Let It Be and With The Beatles because, once I got them, my adventures as a music collector would be finished. When I did buy those records, side by side, they sounded worlds apart. With The Beatles is “rock ‘n’ roll,” loud and burnished, with a little bit of Motown soul. Let It Be is a folk pop record, schmaltzy and hoarse, with a center that cannot hold. Of course the two share influences, vocal styles, and other nuances. Still, critics (amateurs and professionals alike) usually fall back on the old, familiar story: the Beatles developed. Their music changed. They went to India, and did a lot of drugs, and… and… you have to remember it was the 1960s, and things were happening!

This makes the Beatles sound like a bunch of genial cultural anthropologists—observant fellows with the good manners to change their style, again and again, because the times were a-changin’ around them. It’s a funny take, because that’s not at all how it began for the Beatles. After being battle-tested in Hamburg’s dirty little venues, playing relentlessly and putting in their 10,000 hours, the Beatles showed up late to the party in England. “Guitar bands are on their way out,” Decca representative Dick Rowe famously told Brian Epstein. It was his way of passing on a record contract for the Beatles, and while he was mind-blowingly wrong, it’s significant that he was only wrong in hindsight, because of the Beatles. In almost no time, the Beatles were setting the pop trends for everyone else, and defining what was in.

They accomplished this by never being sure, themselves, what their music was trying to do or what it ought to mean. The music of the Beatles is an open question: what is pop music, and does pop music matter? The story of their career is them answering this question in countless different ways. Their music doesn’t, as a whole, continuously advocate for that great 1960s universal, “love.”

The notion of what love means is so conventional on “All My Loving,” and so far-out and prophetic on “All You Need Is Love,” that the two shouldn’t be conflated for the sake of a good story. Instead, “All My Loving” is one version of the entertainer archetype, according to Paul McCartney; it’s written from the twee, sentimental perspective of a man who wants his artful loving to be admired by a crowd. “All You Need Is Love” is also an archetypal performance, of a different stripe. It’s what John Lennon decided to do with a live, worldwide television broadcast. He felt that a band, given a chance to say something to everyone on the planet, should say something profound. His song tries its damnedest to be exactly that, and part of the reason it’s not unbearable is that it starts with “The Marseillaise,” and ends with Paul ad-libbing “She Loves You.” Implicitly, that is, “All You Need Is Love” starts out with a reminder that music can be partisan and nationalistic, instead of universal. It ends by chuckling over its own self-importance. In between is the attempt; for the Beatles, the attempt is all. It is the larger point.

There are many finer shades to this dynamic in their music. Was music supposed to be confessional, perhaps? John clearly wondered if music was supposed to be therapy, going all the way back to “There’s A Place” on Please Please Me, his first song about escaping from painful realities into the sanctuary of his mind. (He’d revisit the theme many times, including on the masterpiece “Strawberry Fields Forever.”) On songs like “I’m A Loser” or “Help!,” John would cry out in desperation, heard by everybody and nobody at the same time. It’s almost painful to note the gap between John’s “I’m A Loser,” which imagined Beatles for Sale as a work of self-lacerating honesty, and Paul’s “I’ll Follow The Sun,” which was “aw, shucks” entertainment, straight out of some unwritten vaudeville show. In the end, John turned therapy into pop music, by attending “primal scream” sessions with Yoko, and howling out the madness there.

On the other hand, what if good songwriting meant creating evocative characters? Paul’s endless talent for doing just that, on songs like “Get Back” and “Lady Madonna,” was both compassionate and grounded, and it frequently saves the Beatles from going all abstract and cold. What would The Beatles be without Paul’s show tunes and barroom rags? Not much fun, that’s for sure.

But Paul’s greatest variations on this theme deconstruct themselves, like “The Fool On The Hill,” about a person nobody understands, and who is still a mystery when the song’s done. In “Penny Lane,” the little miss “feels as if she’s in a play,” and it’s precisely this vertiginous sense that nothing is quite right, or real, that earns her a place in the song’s impromptu tour of a town. In other words, the girl who feels as if she’s in a play is unsettled about being nothing more than a character, an aesthetic opportunity for somebody else. Similar questions hung around the other Beatles, as well. “While My Guitar Gently Weeps,” like “Eleanor Rigby,” is about all the world’s victims, people who are miserable and undeserving. George’s song just makes obvious what Paul’s elides: the limits of art. His elegy will save nobody, as he well knows.

The Beatles are even fascinating when the whole process breaks down, like it does on “I Am The Walrus,” which is John’s angry, sullen pronouncement on the meaninglessness of art. Pasting together inside jokes (that we can only laugh at after reading books on the Beatles), little absurdist portraits, rebellious gestures, and snippets of King Lear, John’s song is an anti-song, an anarchistic dare to follow him without interpreting him, to sing along without “identifying.” It created exactly the dust-up John wanted, with people scrambling madly to piece it together, and leads to yet another anti-song, “Glass Onion.” “Here’s a clue for you all,” John sings, “the Walrus was Paul.” He’s lying, of course, but this was part of his own oscillation between writing anthems and running for cover.

What saves both “I Am The Walrus” and “Glass Onion” is John’s felt insistence on his own intact, isolated, caustic point-of-view. So maybe he can’t communicate his vision; no matter. It’s still real for him. The extremes meet on The Beatles, which contains both John’s message song “Revolution No. 1” and a huge helping of gibberish called “Revolution No. 9.” The numbers are significant. What starts out as something clear and true, on its first spin, becomes nothing if it’s overexposed (the “revolutions” of an LP as it plays).

Even the tawdriest themes, and biggest failures, in the work of the Beatles are worth something now. Take Let It Be, for example. Mixing under-produced and overproduced songs, it’s the polar opposite of its predecessor, Abbey Road. Abbey Road is the humblest work of the Beatles; they’re aware of their stature, but they don’t write about it, putting all the emphasis on others. There’s the “little darling” in “Here Comes The Sun,” the child in “Golden Slumbers,” the candidate for office in “Come Together,” the lover in “I Want You (She’s So Heavy).” The point of the jam session at the end of the closing medley is the music, the pure joy of creating something out of nothing.

On Let It Be, meanwhile, we get music as a parade of personalities writing about themselves. (That’s why, without Let It Be, there could never have been Rumours.) The music comes second to the story, so Paul writes about the Beatles (“Two Of Us,” “The Long And Winding Road”), and George writes about the Beatles (“I Me Mine”), and John writes about how “everybody had a hard year/everybody had a good time.” There’s a film of them all being themselves in awful, raw real time, and they bicker. Heard together, the two “last albums” are two versions of what a rock band can be: outsized personalities, or impersonal craft.

One of the funniest (and most concise) send-ups of the Beatles occurred when McCartney was a guest star on Saturday Night Live. “Mr. McCartney,” says Chris Farley, his voice screwed up to the highest pitch of false humility, “when you said ‘The love you take/is equal to/the love you make’… was that true?” It was a perfect takedown of the thing the Beatles are often mistaken for, including recently by Cirque de Soleil, and frequently (after the break-up) by Paul himself: the band with the big answer. In the real spirit of the Beatles, though, is the fact that Chris Farley is posing a question, one that every viewer and generation has to answer for themselves. What unites the work of the Beatles is a willingness to see what music might turn out to be, whether personal or universal, crass or miraculous. After all, this is the band that recorded “Money (That’s What I Want)” and “Can’t Buy Me Love” on consecutive albums.

They also recorded “Dear Prudence,” a song John wrote for Prudence Farrow, who had locked herself into a room at the Maharishi’s Indian commune. He sang the song beneath her window: “Dear Prudence, won’t you come out and play?” She heard the song, and came out shortly afterwards. Sometimes, in other words, asking questions is our greatest hope for liberation and finding a common cause. That’s the secret the Beatles smuggled into every one of their songs. The uncertainty in their work becomes something with tremulous beauty. It belongs unmistakably to them, but calls out to everyone, to all of us, who listen and who ask.