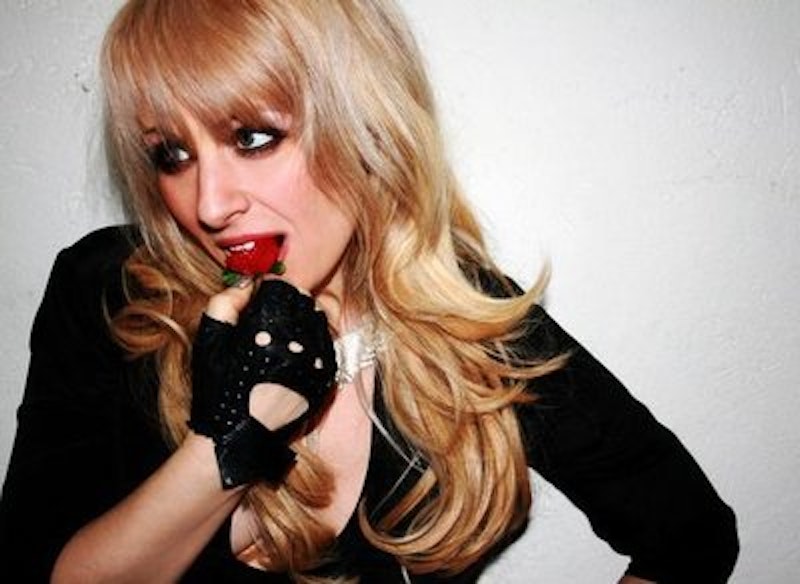 I encountered the rap single “Bad Babysitter” in early 2003, back when my best friend and I were “borrowing” vast amounts of media from SoulSeek and assorted torrents. We were obsessed with music back then, having grown up with the omnibus hyper-reviewing of critics such as Mark Prindle and Steve Erlewine, and we thought we could predict what would and wouldn’t hit—eventually, anyway.

That song, by Princess Superstar, née Concetta Kirschner, struck us as the next big thing in music. I didn’t know how to classify Superstar: was the NYU graduate a nerd rapper like Paul Barman? Was she the “female Eminem?” or the “white Missy ‘Misdemeanor’ Elliott?” Surely she would transcend mere fame, becoming capital-F Famous and perhaps even all-caps FAMOUS. I listened to “Bad Babysitter” repeatedly, worked my way through her back catalog, and figured she’d eventually establish herself as a huge deal, whereupon I’d disown having ever liked her, which among other things gives you an idea of the kind of jerk I once was.

Between then and now, a decade and a half passed. During that time, I’d occasionally check up on Princess Superstar’s new work, which was invariably good and invariably variable, only to discover that, while she appeared to be doing fine, she hadn’t exactly conquered the world.

The songs that emerged between 2002 and 2005 reflect the thoughts of a performer whose career was in transition: Superstar raps about becoming famous and being the best at what she does, yet also admits to insecurities about money, the music business, her body image, and the looming sense that she might end up missing stardom by a couple of minutes at some appointed destination.

Has such a detailed commentary on the mechanics of fame ever played out across a body of post-Cobain music? It’s hard to say, but aside from sotto voce outliers such as Father John Misty and the delusional ramblings of an out-of-touch Kanye West, I’d have to answer in the negative. With Superstar, you got sexually explicit (and innovative) lyrics, alongside scathing critiques of the music business and the nature of success.

“The check’s just in time, it’s from BMI/For $5.39 let’s get in the line for welfare/there, there,” she sings on “I’m in Love with the Music Biz,” a song that captures the problems she experienced over the years landing a deal with a major label.

In 1999’s “I Hope I Sell a Lot of Records at Christmastime,” Superstar addresses fans like me, noting how “Your friend is saying ha ha listen to this funny song/[and] if that’s the case don’t even think about the blank tape/take a date with your lazy ass go to Virgin or Other Music they close late.” To which she adds, “in case you don’t make it visit my website blah blah dot com/See old sexy pictures of me/Order my record and buy the clean version for your mom.“

“I never had great management,” she says. “If I could do it again, I’d straighten out my management and label situation.” In spite of this, some of her songs did well, particularly in the UK. “When a song charts,” she said, “you make money, you make very good money.”

Superstar’s biggest hit, a 2007 mash-up of her single “Perfect” with the Dutch band Mason’s “Exceeder,” was used in various movies and commercials and nearly topped the charts overseas, although the resulting music video was, in Superstar’s opinion, “so fucking cheesy.”  The song itself is good—all of her music is at least good—but it’s curious that, out of the many innovative tracks on her concept hip-hopera album My Machine, this is the one that resonated most with listeners.

More than that, the fact that this unorthodox album doesn’t have an entry in the 33 1/3 series devoted to it is puzzling. Admittedly, the high concept sci-fi story is too-too much for the average listener, but it’s a masterstroke nonetheless: It tells the story of a fictional Princess Superstar who, upon finding herself “ahead of [her] time/Well, some of the time,” hatches a plot to preserve her mind until 2080, when the public would be more accepting of her work and she could create an army of duplicates to serve her—so many that she’d eventually become the only famous person alive.

To that end, the Princess Superstar of 2080, who takes the boastfulness of her 2005 counterpart and magnifies it a hundred-fold, orders her legion of duplicates to study a song like “Bad Babysitter” and reproduce it, because she needs “10,000 hits like this to make me rich.” The results are compositions like the infectious “Quitting Smoking Song,” surely the finest song ever written on that narrow topic, and the extremely mindless “Sex, Drugs & Drugs,” written because Superstar 2080 believed the prior song wouldn’t resonate with enough people: “Nobody likes a song about quitters/What are you, a hippy?”

“I had always been fascinated by fame,” Superstar says of that album. “I mean, if you’re incredibly famous, but your life is miserable, what good is that?”

Indeed, Superstar 2080’s life of fame, and the lives of the duplicates who eventually rise up and destroy her, is anything but ideal. “My Machine,” the title song, offers an introspective look at what Superstar the character and Superstar the performer want from their careers: “I wanted someone to pick me, to love me/to be the greatest brand, I don’t understand, I was just trying to comprehend, man.” The song is infectious, because everything she writes is delivered in a catchy singsong manner, but the conclusion is complicated and ambiguous, asking the listener “would you just be alright/could you just be alright/If all this could come true/Would you be ready, well I’d be ready if I was you.”

Princess Superstar’s work since then has run the gamut from catchy mash-ups (her version of April March’s “Chick Habit” adds a layer of 2 Live Crew-style rhyming to the original, with lines such as “OPP got ADD/whooping girls up and down like the AKG”) to teaching hip-hop classes for children. She has also worked extensively as a DJ, something that may have compromised her in the eyes of others in the business: “You become a DJ and suddenly it’s like you’re out of the scene, even if you’re not.”

What music executives seemed to want from Superstar, she says, “was to be like Iggy Azalea, who is just Coca-Cola: It’s bland, it’s everywhere.” She couldn’t do that; she wanted to produce unique material that meant something to her.

Today, Superstar works on whatever projects capture her interest—including lots of self-produced YouTube programming. She’s a mother, an experience that has altered her perspective on the world, and plans to devote some time to producing children’s records.

“Most of the music marketed to children is terrible,” she says. “Kids are creative, and they deserve something better.” More broadly, she intends to continue performing on her own terms, having no regrets about the inability of an Iggy Azalea-sized audience to embrace her raunchy, against-the-grain genius.

“If your art and your life aren’t connected in a meaningful and healthy way, what’s the point?” she asks me. “I’m an artist, I’ve made a living from my art, and what I do validates me. At the end of the day, that’s what matters.”