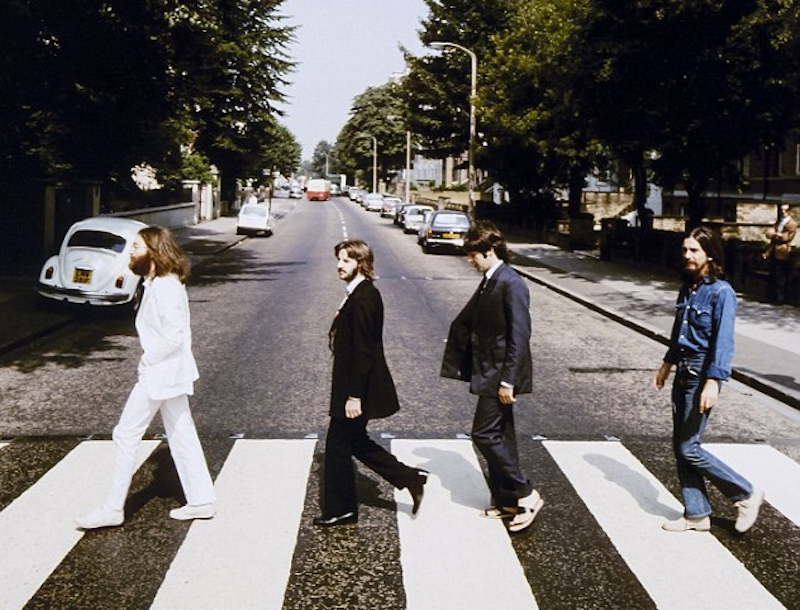 I’d like to reach the quillionth unnecessary Beatles opinion with this article. Today is the 47th anniversary of the release of Abbey Road, the last album The Beatles made together. Somehow, it remains the default/go-to choice when picking favorites despite featuring some of the group’s most boring songs. It’s safe: no tape collages, no raga or blistering reversed guitar, and an anti-septic atmosphere that runs contrary to the dizzying and challenging attitude of the records that preceded it. You’ve heard this all before: Rubber Soul was pot, Revolver was LSD, Sgt. Pepper was liquid Owsley LSD every day for a year, The White Album was the paranoid schizophrenic comedown, and Let It Be was the salvaged fly-on-the-wall document of a band falling apart. But even that last album had some of Lennon and McCartney’s best songs on it, like “Across the Universe” and “Two of Us.” Abbey Road’s best songs are by George Harrison, which says a lot about the quality of the thing (I’m not a fan of pissy George, and his muddy solo album All Things Must Pass. Nothing on there comes close to John Lennon’s worst, let alone the beautiful blood-letting of Plastic Ono Band). “Something” is great, and so is “Here Comes the Sun,” but they both show George’s inability to write interesting bridges. They’re saved by their guitar hooks, but they wear out pretty quickly for me with those lazy, plodding middle-eights that sound like a student throwing something together for class at the last minute.

And the rest? Abysmal. Lennon beats out Jimmy Page for most offensively blatant plagiarism on “Come Together,” a string of hepcat nonsense held together by that stupid fucking bassline. The song is so irritating and musically bland—even “Woman Is the Nigger of the World” had a decent tune! It’s such a steep fall from the brilliant “Glass Onion,” a menacing and manic meta-commentary on Lennon’s disillusionment with the Beatles and their mythology—and here he is just a year later willfully offering some nicked blues abortion for pub singers across the world. Abbey Road is also where The Beatles stopped sounding like The Beatles and entered the world of 1970s production. The White Album was the first record they did in stereo, and it shows—the primitive hard-panning of drums and vocals and totally bonzo stuff going on in “Revolution 9” sounds raw and unpolished in a way that we never really heard again from a band as big as The Beatles. In less than a year that transitional period was over, the sound of 70s rock records is all over Abbey Road, and it’s a mess: the punch and clarity of the mono records, and the utterly singular sound of The White Album are replaced with this safe and sterile platonic ideal of what a rock band should sound like.

Oh, I almost forgot: all the songs are shit, too. McCartney gets even more Granny Smith with “Maxwell’s Silver Hammer” and the odious “Oh! Darling,” a song so corny it can only be covered at weddings and in high school auditoriums. “Octopus’s Garden” is, like “Yellow Submarine,” unlistenable (though I do love “Don’t Pass Me By”—maybe because Ringo worked on that one for years before it finally made it onto an album). Lennon once again proves what a lazy git he could be with “I Want You (She’s So Heavy)” and “Because,” which are both based on the same chord arpeggiation, separated only by a half step. One of the coolest moments on Abbey Road is when “I Want You” smash cuts into silence—what a relief! That abrupt touch is the only piece of Beatles humor and playfulness present on Abbey Road.

I’m trying to erase the medley on side two from my consciousness. Besides Lennon’s “Polythene Pam,” a nice little fragment, it’s McCartney’s mess, culminating in the nauseating “Carry That Weight,” all plastic sentiment and empty bombast, a song maybe not even worthy of Wings. I’d also really like some clarification here: “And in the end the love you take is equal to the love you make.” What the fuck does that mean? Seriously. Shouldn’t it be the other way around? “All You Need Is Love” was easy enough, and they should’ve left it at that. All Abbey Road has left us with is annoying tourists and milquetoast music, the antithesis of what The Beatles stood for. I’ll be here ringing the shame bell, 47 years late, while all of you go about your day, blissfully unaware of my deranged deviations, adding yet another piece of Beatles-related dross to the pile. But it has to be said: Abbey Road is their nadir, and nothing else even comes close.