On Econo Creep, a recent tape from Texas noise duo How I Quit Crack. 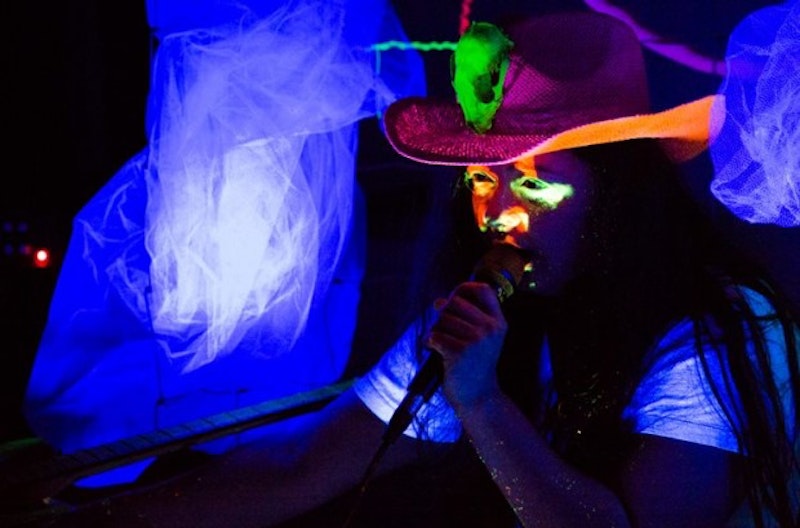 Econo Creep (No Rent) finds Texas-based duo How I Quit Crack hovering at the apex of its powers. Tina Forbis and Chris Cones have been edging towards this peak for a few years, to be sure: approaching albums as studio statements rather than extensions of their mythic, fluorescent grease-paint spattered live maximalism; dialing back on the bombast; the accentuation of a palpable sense of ascent. Last year’s Eugenicide, from Cruel Nature Records, represented a huge stride in this direction.

Taken either as a whole, or in parts—there are seven movements, and each side of the cassette bears a separate, ceremonial title—Creep is mesmerizing, and invitingly diffuse. A newfound minimalism reigns throughout, granting listeners space to savor Forbis’ vocals, which wax and wane with the sonics. “Sacred Herbal Beers” marries an operatic, phantasmagoric chorus to disembodied, rattling beats and snatches of guitar. “Bull Cries” dips and bobs like a short-circuiting buoy; “Lesson in Utility” drifts along in a continual state of self-swallowing.

Penultimate wallop “Jadjude” is the point where Creep congeals into something concrete—a threshing flail, a shrieking growl, a churning thrum—feeding that most typical noise expectation of the crescendo as exeunt. HIQC sidesteps that cliché, instead opening a third eye wide before gently and firmly closing it.