Zootopia Is Another Disney Triumph

While London Has Fallen stinks it up. 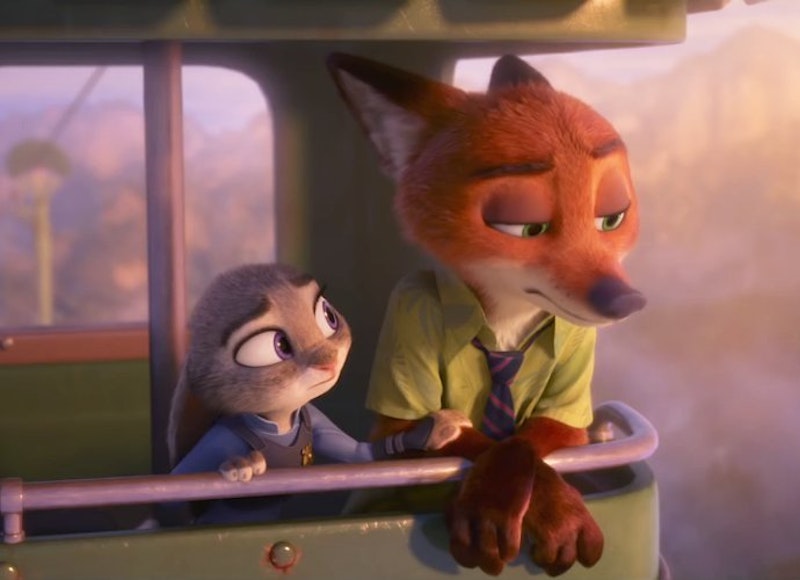 The Walt Disney Animated Studios label continues its recent run of success with Zootopia, an animal-based cartoon film that offers exciting visuals, good characters, lots of laughs and even a timely allegory about American race relations.

Directed by animation veterans Byron Howard and Rich Moore, Zootopia—Disney’s 55th animated feature—establishes a gorgeous and exciting world: It’s an American city, populated entirely with taking animals, in which predators and prey get along in perfect harmony, and “you can be anything.” But as you might’ve expected, some sort of unsavory things are going on below the surface allowing this children’s film to take on the plot of a gritty police procedural.

Judy Hopps (voiced by Ginnifer Goodwin) is a go-getting rookie cop, the first bunny ever to join the Zootopia police force. She’s paired with a smalltime con man fox Nick Wilde (Jason Bateman), in order to help solve the case of a missing otter.

We’re directed through a fascinating world: a lion mayor, buffalo police chief, and a gazelle pop star with Shakira’s voice. There’s even a large, possibly gay cheetah who’s a police dispatcher and idolizes the Shakira gazelle. Although it does raise some interesting questions about what ever happened to all the people, and where they went.

Soon after, a pretty clear racial allegory emerges, as it turns out there’s a secret plot to get the predators and prey to not get along so well anymore. It’s not a perfect allegory—and I’d imagine the “problematic” arguments are already being drafted—but the whole thing gets a feel-good ending.

The film has a strong voice cast, with Goodwin from Big Live, bringing welcome energy to the role. The likes of J.K. Simmons, Idris Elba, Jenny Slate, and Nate Torrance also show up voicing various animals.

The Disney animation arm, in recent years, has put together a run—with Frozen, Wreck-It Ralph and Big Hero 6—that puts Pixar’s recent output to shame. Zootopia isn’t quite an instant classic, but it’s still another winning entry for Disney.

On the other hand, London Has Fallen is an ugly sequel. The action spectacular Olympus Has Fallen, the more successful of two 2013 films about invasions of the White House, was most notable for acting as a homage to the action cinema of the 1990s. It was a throwback to such pictures as Air Force One, Executive Decision and In the Line of Fire, centering the action around a presidential assassination plot and bringing back lots of tropes associated with that era. Yes, there was a red countdown clock. Yes, the launch code contained the word “niner.”

London Has Fallen leaves the 90s behind, and owes a lot more to the legacy of 24, with action tropes—as well as politics—which seem left over from the Bush/Cheney era. Sure, the plot is just as ridiculous and implausible as in the first film, and while the action is somewhat effective, things get somewhat ugly, both visually and thematically.

The Swedish-Iranian filmmaker Babak Najafi steps in to direct, replacing the first movie’s Antonine Fuqua and working from a script from four credited screenwriters. The plot entails a terrorist conspiracy to assassinate several world leaders during a funeral in the British capital. The villains this time are Middle Eastern, following the first film’s North Koreans and—borrowing from 24’s successor series Homeland—the big terrorist’s main motivation is revenge for a U.S. drone strike that killed one of his family members.

The 24 comparisons are plentiful: The two heroes are a hyper-competent, badass federal agent (Gerard Butler) and the president of the United States (Aaron Eckhardt.) And if anything, the sequel allows Butler’s Mike Banning to be even more Jack Bauer-like—there’s a lot more jingoist one-liners than before. The final season of 24 was even set in London.

Unlike in the first movie, which ludicrously depicted a ground invasion of the White House in broad daylight that succeeded in about 15 minutes, London has disturbing real-life echoes not only of various ISIS killings of recent years, but also of the recent Paris attacks. The difference is, this film’s terrorist plot is on a much larger scale and seems to have hundreds and hundreds of participants, all of whom were able to successfully infiltrate government agencies.

The bad guys are Arab-looking and established as coming from Pakistan and Yemen, which is to say nothing of their hundreds of collaborators in London. But Islam is never mentioned nor so much as hinted at. Meanwhile, the film takes an ugly turn at the end. I won’t spoil what happens, except to say that it draws the exact opposite lesson from drone strikes than, say, Homeland did, and wholeheartedly embraces the American foreign policy consensus of 2002.

And it’s not only the politics that are ugly. Some scenes, especially in the film’s second half, are so poorly-lit that it’s impossible to tell who’s standing where and doing what. The film also could’ve made better use of its cast. Following the murder of the vice president in the first film, former Speaker of the House Morgan Freeman has been elevated to the veep slot, which in this franchise means directing things from the White House while the president is off having adventures. A bunch of outstanding actors (Melissa Leo, Robert Forster, Jackie Earle Haley) get very little to do aside sit in the Situation Room and look scared; Leo, who had probably the most memorable moment in the first film, is wasted. But at least the president’s irritating young son, who kept distracting from the plot in the first film, is kept off-screen this time.

Meanwhile, the main terrorist is played by Alon Moni Aboutboul, an Israeli, which should certainly piss off various people for various reasons. London Has Fallen, clocking in at barely 100 minutes, largely fails because it takes itself too seriously; any joy that was in the first film is all but gone. Ridiculousness plus fun is good for this sort of film. Take away the fun, and what’s left?