Now I Love the Way It Feels

The sexual politics of the Wachowskis' first film. 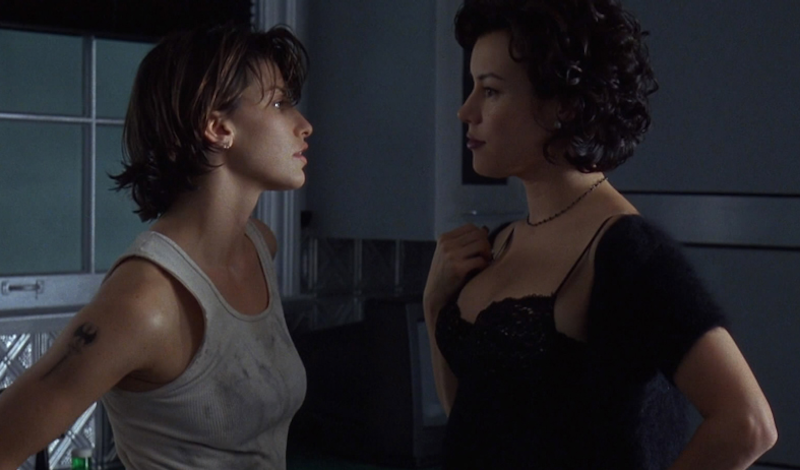 The first 10 minutes of the Wachowskis' 1996 directorial debut Bound consists of nothing but ex-con Corky (Gina Gershon) and mobster arm-candy Violet (Jennifer Tilly) flirting with each other. That alone was enough to convince me I was about to see the best crime thriller ever. But then, as Violet seals the deal by revealing her tattoo—a single rose on her left breast, just above the nipple—she utters this line: “She promised it wouldn’t hurt, but it was sore for a long time after. I couldn’t even touch it. But now I love the way it feels.” I grinned when I heard that, because now I know that along with so many others in this movie, this line was probably about one thing nobody suspected at the time: being transgender.

On Tuesday night, every queer section of the Internet lit up en masse upon seeing Lilly Wachowski’s big coming-out statement. Prompted by a vaguely threatening visit from a Daily Mail “journalist,” Lilly joined her sister Lana as an out trans woman (and presumably lesbian; Lilly has been married to Alisa Blasingame since 1991, while Lana has been married to Karin Winslow since 2009). Her statement has a host of great quotes, but this one in particular stuck with me: “[M]y reality is that I've been transitioning and will continue to transition all of my life, through the infinite that exists between male and female as it does in the infinite between the binary of zero and one.” This resonated with me on a personal level, but also invited a fresh look at the Wachowski sisters’ past work; Lilly and Lana, both very private people by Hollywood standards, were transitioning out of the public eye for much longer than any of us were privy to, which begs the question: how influential was the infamous closet on these brilliant filmmakers?

If Bound is any indication, it’s been informing their work from the beginning. The quote above can obviously be read as a metaphor for the discomfort of sexual reassignment surgery (SRS), but I prefer to look at it in a much broader light (no pun intended). To me, it feels very much like a trans girl describing the emotional pain of transitioning—you think it’ll be great right away, but it actually sucks for a while as you figure out who you really are, how to cope with your new reality. Eventually, though, you find ways to quietly revel in the very fact that you’re you. At least, that’s been my experience during the limited time I’m been in transition.

Violet’s character arc is, in many ways, a metaphor for a trans woman finding herself and the strength to come out. While Corky just got done with a five-year prison stretch, Violet is still in jail—that is to say, she’s trapped in a cisgender, heterosexual relationship with mob underboss Caesar (Joe Pantoliano). She’s been with women in the past, but not since Caesar locked her down. The Wachowskis didn’t try to hide the parallels: “Five years is a long time,” mutters Corky. Lilly’s four decades must have been excruciating.

Caesar is everything Violet as a trans cipher must escape. He’s a barely-suppressed wellspring of violence and aggression; when he relates his story of punching Johnny (Christopher Meloni) in the face, his only regret is not hitting him again. Speaking to Corky, Violet’s plea is from the heart: “I want out. I want a new life. I see what I’ve been waiting for, but I can’t do it alone.” This is Lana and Lilly speaking through their then-male presenting selves, expressing their need to escape toxic masculinity by living as their true female identities.

One could make the argument that, since the Wachowskis are apparently both lesbians, that all this racket I’m making about trans subtext is moot and Bound is exactly what it says on the tin: a lesbian thriller. But flash forward to the film’s climax, when Caesar, having discovered Violet and Corky’s plot to set him up as the fall guy for their con, ties both women up for interrogation. “I shoulda the minute I saw you,” he spits at Corky. “Fuckin’ queers, can’t be trusted.” Deceit and duplicity are stereotypes often reserved for trans women, who are frequently called “traps” and accused of tricking men into sex, or simply into sexual attraction (hence the widely accepted “trans panic” criminal defense, in which a person accused of assault or murder can claim temporary insanity after discovering the object of their affections was “really a man”). This mindset is so common even two decades after Bound’s premiere that Caesar’s use of “queers” seems deliberately imprecise.

Soon after, Caesar coerces Violet into cooperating: “I can kill you right now, if that’s what you want. Or you can live… You’re gonna help me make Mickey believe that everything is normal. Now whaddya wanna do? You wanna live?” This is the combination of threat and demand that cis men make of trans people, particularly women, every day: be normal (by staying in the closet or passing perfectly) or die.

But Violet isn’t having any of it. After a tense chase scene, Violet gets the drop on Caesar, who taunts her for being unable to shoot him. “Caesar, you don’t know shit,” Violet sneers, and empties the chamber into his chest. The Wachowskis told us straight up back in 1996 that a core idea behind Bound was seeing a woman on the street and making “a host of sexual assumptions and they would all be wrong…this constant idea of surfaces and truth under surfaces.” Nobody (least of all Caesar) looked hard enough under the surface to see what was really going on: that through Violet, the Wachowskis were telling audiences not to assume anything based on appearances—even gender.

“You know the difference between you and me, Vi?” smirks Corky as the two ride off into the sunset. “No,” smiles Violet. “Me neither,” comes the reply. It’s hard not to imagine Lana and Lilly Wachowski sitting back with a glass of wine apiece and repeating this exchange to one another. So much about Bound makes perfect sense with the benefit of hindsight. It’s certainly a high water mark in queer cinema, but not just for cis lesbians; this is a movie where trans women can find a reflection of themselves, too. By the time the credits roll to the tune of “She’s a Lady,” Violet is bound only to her lover, having left the restraints of masculinity far behind. I’m overjoyed that I can now say the same for Lilly.