Afghanistan to the 7/11 Bargain Bin 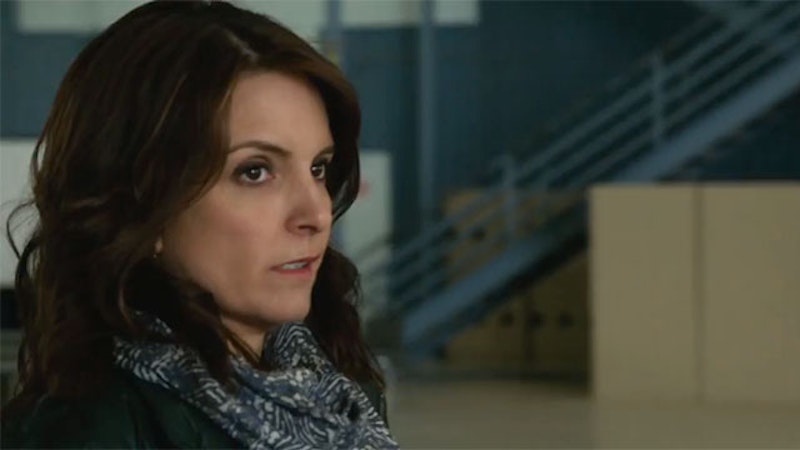 Tina Fey is on a roll: tumbling down a mountain, picking up debris and superficial wounds along the way, falling hard after an attempt at being a serious and dynamic dramatic actor. Her last movie came out only three months ago (Sisters, a buddy comedy that was mediocre and too long but very much in Fey’s wheelhouse), but she’s already back with another one, Whiskey Tango Foxtrot, based on reporter Kim Barker’s book The Taliban Shuffle: Strange Days in Afghanistan and Pakistan. Fey plays Barker as a bored, childless thirtysomething with nothing to do and few prospects for her at home as an off-air writer and contributor. She throws herself at an opportunity to become a foreign correspondent in Afghanistan in 2003 just as the Iraq War is beginning, and gee whiz, hijinks start right off the bat. Fey’s character finds herself in a “Ka-bubble,” going from filming reports in a headscarf and narrowly avoiding bullets and bombs during the day and drinking a lot and hooking up and living like a college freshman at night.

You’d think that a movie prominently promoted with variations on the line “If you’re a four in New York, you’re a 10 in Afghanistan” would be a broad comedy or a farce in the mold of Stripes or M.A.S.H. It’s certainly something you’d never hear in either of Kathryn Bigelow’s hyper-serious and semi-propagandic films The Hurt Locker or Zero Dark Thirty. No, this film is neither—it’s a nowhere movie. Whiskey Tango Foxtrot is destined for the 7/11-dollar bin, its run in thousands of theaters across America will be brief and something of a peculiar fluke.

The film’s a tonal catastrophe, a throwaway that everyone involved knows is of little enduring interest. The main takeaway is that Fey thinks she can continue to play variations on her 30 Rock character Liz Lemon in varying sets and settings and elevate her career and stature to someplace higher than it already is. What’s the point? Fey isn’t making the effort to transition in the same way that Matthew McConaughey has, but she isn’t cranking out Mean Girls 2 or 30 Rock: the Movie or even another Sisters. Fey and Poehler’s stint hosting the Golden Globes was so successful that they did it three years in a row, and Fey appeared at this year’s Oscars for no discernible reason. Whiskey Tango Foxtrot has fallen stillborn from the studio slates, dumped in the beginning of March and actually given money for promotion. The movie isn’t offensive; it’s just confusing and lazy. Near the end, when Fey’s main beau is kidnapped by terrorists, his rescue is depicted in slow motion under the strains of Harry Nilsson’s syrupy cover of “Without You.” It’s the most inappropriate use of music in a film I’ve seen in several years: terrorists and their families’ are being rendered lifeless and limbless, blown into a million bits of red goop as Nilsson pines for a lost lover in one of the great overplayed sentimental hits of the 1970s.

Our Brand is Crisis, a similarly disappointing “white lady out of place in a foreign land” movie from last year (also featuring Billy Bob Thornton in a tough but ineffably fey role), at least had a compelling plot. There’s nothing going on in Whiskey Tango Foxtrot—the “you’re a four in New York…” line sums up the first two-thirds of it, while glib platitudes about Afghanistan being “the forgotten war” with people still serving make up the last bit. This is an unfunny episode of 30 Rock with none of the same characters or fantastical set-ups. And it takes place in Afghanistan. Take a flyer on this one.