Triple 9 Is Too Overstuffed to Work

A crowded cast with too much plot. 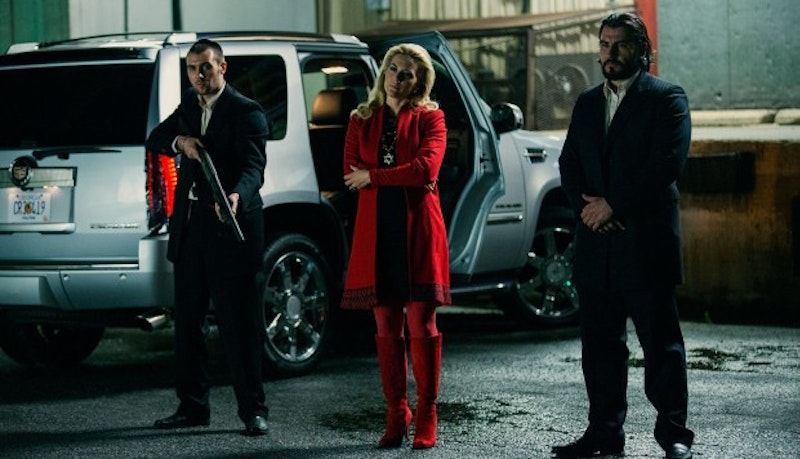 Triple 9 takes one of the year’s deepest and most talented casts, and drops them into one of the most overstuffed, convoluted plots. There are a couple of standout action sequences and a couple of memorable performances, but it’s a disappointment.

Directed by Australian John Hillcoat (best known for the movie adaptation of The Road), Triple 9 is set in an Atlanta that, over and over again, juxtaposes the gleaming skyline with housing projects and crack dens below. The film begins with a heist sequence, leading into a highway chase, that’s right up there with the opening scenes of Heat and Inside Man. If only it could keep up the pace…

The wildly complex plot soon begins to take shape: There’s a crew of bank robbers (Anthony Mackie, Chiwetel Ejiofor, Aaron Paul, Clifton Collins Jr, Aaron Paul and Norman Reedus). Some of them are dirty cops, some are military veterans, although if it takes until halfway through the movie to figure out which are which, I don’t blame you. Meanwhile, Casey Affleck appears as a good-guy detective who begins to sense something is off and Woody Harrelson plays his uncle, a respected major crimes investigator who, despite a thin mustache and raging drinking problem, is the moral center of the film.

The crew is working for/being blackmailed by a Russian/Israeli crime syndicate led by an almost unrecognizable Kate Winslet, whose Russian Mob boss husband is imprisoned in the gulag—but the crew is needed to break into a government facility, which will somehow convince Putin to free Winslet’s husband. Their solution? The “triple 9” of the title—if a cop gets shot, every other cop in the city will rush to the scene, leaving the facility in question unguarded.

Is the depiction of the Jewish crime syndicate anti-Semitic? I wouldn’t say so, although I’d imagine we’ll be seeing at least one think piece arguing that it is by week’s end. What I found weird was the cultural incongruities: The Russian Mafia isn’t typically known as a Jewish outfit, and while this crew uses a kosher butcher as their front and have a group of frum-looking enforcers, they’re led by a couple of women who don’t appear to adhere to Orthodox standards of modesty—Winslet’s character dresses like a Real Housewife, while future Wonder Woman Gal Gadot is wearing noticeably less clothes each time she appears on screen.

And besides, this movie’s attitude towards Jews is a lot more positive than its view of cops. The police groups currently boycotting nationwide over a couple of innocuous Beyonce lyrics might more appropriately direct their ire at a film that depicts more police officers than not as corrupt and murderous.

Harrelson gives the best performance, even if he sometimes appears to be in a different movie than the other characters. Harrelson has played a lot of drunken and drug-addled cops before, but he finds a whole new way to do it here. Winslet is also impressive performance, but I wouldn’t have even recognized Casey Affleck if not for a few mannerisms and facial expressions in which he greatly resembles his brother Ben.

On the other hand, the crowded cast doesn’t give a lot of the actors much to do, including usual standouts like Reedus, Ejiofor and Mackie. As for Aaron Paul, let’s just say this isn’t the best junkie performance he’s ever given.

There are other weaknesses. The film has three times as much plot as it needs. The terrific sequence in the first 10 minutes ends up having little to do with the rest of the movie. Both the plot by the Russians and the one by the robbers are convoluted and roundabout and don’t make sense. And the ending is particularly weak, trying to ape The Departed without coming up with any kind of satisfying payoff.