Stanley Kubrick's final film remains as beguiling and ripe for analysis as it was in 1999. 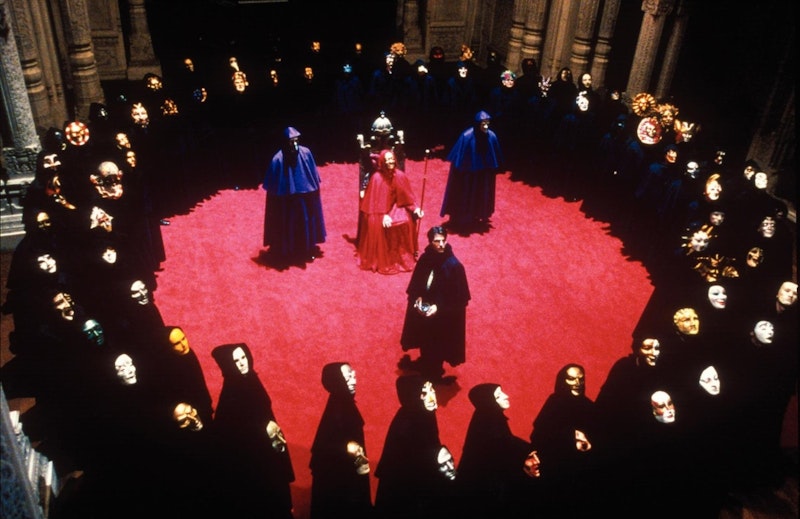 This is the fifth in a series of articles on American films released in 1999.

One evening, a wife reveals to her husband that she almost cheated on him, and tells the story of how it happened. Visiting Cape Cod, she saw a naval officer and merely from one glance, she was willing to throw away her marriage for a brief sexual encounter. The opportunity never presented itself, and later that evening she made love to her husband out of sadness and tenderness. The husband, a doctor, stunned by this revelation, has no chance to respond because he’s called to visit a patient who has just died. The wife’s confession drives the husband to wander around the streets of New York City in search for the meaning of erotic experience.

This is the premise of Stanley Kubrick’s last film, Eyes Wide Shut (1999), in which Tom Cruise and Nicole Kidman play a couple, Bill and Alice Harford, on the brink of either dissolution or strengthening of their marriage. It’s loosely based on Artur Schnitzler’s novella, The Dream Story (1926). Just like Schnitzler’s novella, about 19th-century decadence, Kubrick’s adaptation into 20th century-New York City, deals with upper class indulgences and internal dramas.

Throughout his career, Kubrick has made films that disturbed audiences, as if to shake them out of their slumber. The psychological disturbances are most clearly prominent in A Clockwork Orange (1971) and The Shining (1980). The opening shot of A Clockwork Orange, for example, in which we see Malcolm McDowell’s violent gaze as the camera pulls away, revealing female mannequins in various stages of sexual objectification, is one of the most unsettling shots in cinema. Wendy Carlos’ haunting music, performed on an equally macabre sound of the Moog synthesizer enlarges the violence that’s about to ensue.

The most obvious symbol in this film is the mask. The metaphor and analogy of masks has been widely used and analyzed in many intellectual fields—philosophy, art, theater and psychology. Most obvious and prominent example of mask usage is Greek theater, specifically tragedy. Masks have also been used in rituals, particularly pagan festivities. We still have vestiges of that spirit left in carnivals in which many people take part: a collective effort at individualized identity. Masks are actual objects, which function in many ways.

Friedrich Nietzsche wrote, “Whatever is profound loves masks,” as if alluding to some assertion that the most authentic existence is the one in which we’re all actors, always concealing something from others. Masks are symbols of individuality and the ultimate disappearance of it. They can be seen as portals into an individual existence that has lain dormant and needs to be awakened in order for man to reach a god-like state of being.

Another possibility is that masks are illusory pathways that lead to the doors that either don’t open or have no exit (much like what happens to Bill). But they also point to a stopping point of an ethical action because the mask and its wearer is in the continuous process of masking and unmasking, and an interruption or a rift of the other into the opaque being is ignored. The authenticity of existence is not in the following of moral and social obligation but in going over the edge into the complete Dionysian inebriation.

Bill Harford is incapable of any of this. But this isn’t something to be lamented. He’s a man who’s reminded of the commitment to his wife and their young daughter. It’s the moral aspect of human life that calls out to Bill to not indulge in his fantasies. And yet, how can we ignore that almost every single time he chose not to enter the world of depravity and infidelity, he was interrupted by something outside of himself? Is he really a moral man devoted to his wife and daughter?

At the end of the film, both Bill and Alice are grateful that they’ve “survived” the fantasies. Bill insists that this will be “forever,” but Alice rejects that word. Forever is a suffocating prospect for Alice, and we ‘re left to wonder whether their relationship is authentic to begin with. Even at the end, Kubrick creates a moment of tension and discomfort.