The Gaslight Solstice of Midsommar 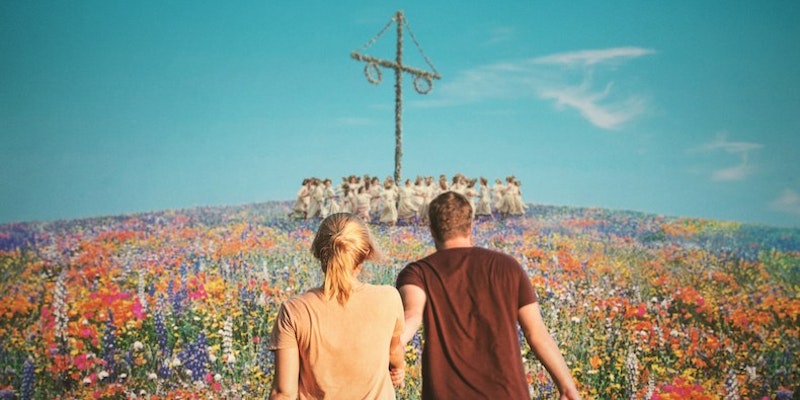 Midsommar isn’t as impressive or powerful as the first half of Hereditary, but it’s much more consistent. Hereditary is too bone-bleached to come back to, I can’t imagine putting myself through it only to end up at that moronic ending repeatedly, never knowing what’s going on in that treehouse. I can’t believe anyone would suggest that, in order to understand the ending of Hereditary and find out who “King Paimon” is, you have to do some reading. Excuse me? Films don’t come with syllabi. There’s no downloadable content, no bonus track versions split between Target, Walmart, and Best Buy. Rosemary’s Baby is a frequent comparison, but the cult ending works in a couple ways that the cult ending of Hereditary doesn’t: Polanski’s film is more disciplined and rigorous, the walls of the Dakota just keeping closing in for over two hours, and you’re sure that this is either all a big misunderstanding or it’s all in Rosemary’s head. No—it’s actually Satan! “HAIL SATAN!” is a punchline in Polanski’s film, popping the balloon of one nightmare only to wake up to a worse reality. The unambiguous existence of the Satanist cult doesn’t damage the film.

Aster's authoritarian and inhuman camera moves creates as much dread as his anguished subjects screaming that they want to die. I had that ridiculous “HAIL KING PAIMON!” chant from Hereditary stuck in my head the morning I saw Midsommar, and was so happy to find that this movie is funny. There are more laugh lines than big kills, and the wild gore comes at regularly scheduled, predictable intervals. And almost all of it takes place in the sunshine, save for the brutal opening sequence, with Dani (Florence Pugh) anxiously emailing her bi-polar sister, unable to get in touch. Maybe she’s in danger? Oh, she killed herself and their parents by filling the house with carbon monoxide. She even affixed breathing tubes to her sleeping parents’ faces, had a couple cars running in the garage, the whole house was fucked… this is a murder-suicide that required a lot of planning and equipment.

Dani is obviously distraught, and we barrel through time in a post-traumatic daze. Her “nice guy” boyfriend Christian (Jack Reynor) is the villain here, agreeing to go on a trip to Sweden with his graduate student friends without consulting her. It’s an exotic festival in the middle of nowhere, lots of ceremonies, weird traditions, potential thesis material—in other words, manna for privileged grad students. Christian subsequently invites her to come, sure she won’t accept—still so grief-stricken and anxious—but she calls his bluff, clearly annoyed that she’s repeatedly sidelined and gaslit. One of the best lines in the movie comes immediately after the cliff sacrifice: they all just watched two 72-year-old Swedish people commit a grisly suicide, Dani is beside herself, and Christian can only manage, “Yeah… yeah, that was shocking.” Understatement is the rule here, among the Swedish cultists and Christian’s (all male) friends.

Plausibility also isn’t a problem with Midsommar. The opening pre-Sweden sequence is told so well, with such economy and concision, it makes one wish Aster will make films in different genres—his severe eye could make anything interesting. There are gigantic leaps of time in continuous shots: the most stunning is Dani walking to the bathroom to cry after agreeing to go to Sweden, we watch her from above walk into the bathroom suddenly on the plane, crying again. There are kaleidoscopic drug sequences that never feel hokey or camp. Even the big “Look what I can do!” camera move (a nauseating 360 twist following the Americans’ drive to the cult camp) doesn’t feel out of place or pure show-off. The final shot is as much as a punchline as “HAIL SATAN!” In Rosemary’s Baby: Dani, crowned the exalted “May Queen,” watches with glee as Christian is paralyzed and burned alive inside of a fresh bear carcass. She smiles ear-to-ear for the first time in the whole movie, and then, as in Hereditary, Aster cuts to brutal black as the strains of MOR soft-rock begin as the credits roll.

If Aster thinks Midsommar is “an operatic breakup movie,” okay: at least it fits better than whatever Hereditary was. For a two-and-a-half hour movie, it moves at a clip and culminates in a punchline at the expense of Dani’s pathetic boyfriend. Aster has also said he thinks of Midsommar as a black comedy. Sure: the haplessness of the visitors and their eagerness to walk the path of their horror movie archetypes. Although it’s not as realistic or plausible as Rosemary’s Baby, there isn’t anything strictly supernatural in Midsommar, despite its flights of fancy and drug-distorted diversions. This could all happen, and if the details of the cult don’t line up or make sense upon inspection, it doesn’t matter—unlike Hereditary, the cult’s specifics aren’t the focus. This really is a movie with one morning: listen to your partner. A day-glo revenge film for gaslit women? Sure, go nuts… Midsommar offers enough to support many interpretations, something Hereditary closed itself off from.