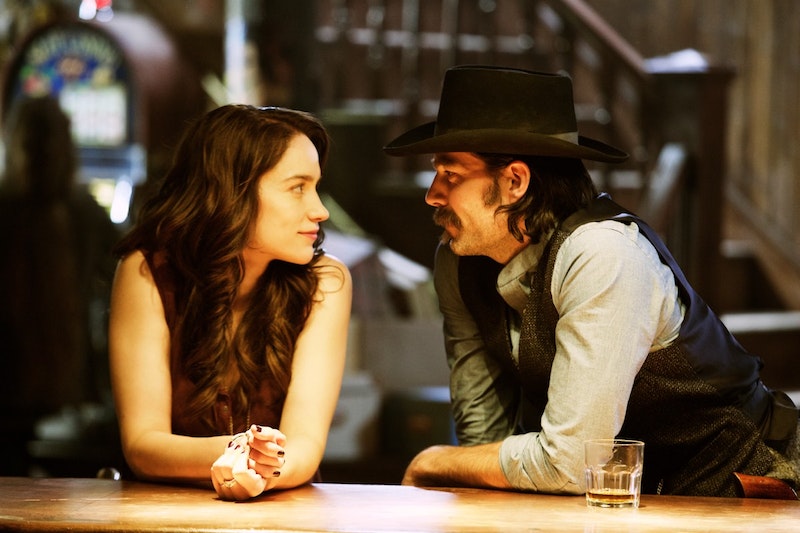 "Wynonna Earp is fun!" they said. "Watch the badass Western woman shoot demons!" I took the bait. Wynonna Earp is only in its second season, so there wasn't much catch-up. I turned on the pilot, expecting some rollicking Western shoot 'em up supernatural entertainment.

I made it through about 20 minutes. Wynonna is bad and tough because she wears a leather jacket. "I don't do authority," she says, "I barely do sober." That's supposed to be character development, not a punchline. There's a federal investigator of some sort who looks earnest and I think there was supposed to be sexual tension because when he and Wynonna gazed at each other they appeared to be experiencing some sort of low-level nausea. There was exposition, and exposition, and then some more exposition. "Exposition, exposition," Wynonna says to her sister. "Exposition," sister replies." Wynonna may have said, "Exposition" again, but I didn't hear it, because I turned it off. My 13-year-old is still mocking me for having forced him to witness such drivel.

True, it's not fair to dismiss some 10 hours of drama after watching the first 20 minutes. It's entirely possible that in episode two, or three, Wynonna ditches the leather jacket for better characterization, or at least a rebellious tattoo. There could be less exposition. I should give it more of a chance.

The problem is, why would I want to? When you don't like something, you don't generally say, "I must watch all of this three times to make sure I really don't like it!" You say, "Good lord, Wynonna Earp is a joyless Buffy retread and I’d rather undergo elective surgery. Let us watch something else."

People think critics are a bunch of misanthropes who revel in hatred. And overall that is more or less the case. But even they’d rather watch good shows, not bad ones. No one turns on the television hoping to be bored and irritated. Which means, practically, that there’s a huge bias towards critical positivity. Critics sometimes have to watch shows they hate—I was talking to one friend recently who was bemoaning the fact that watching Game of Thrones is a non-negotiable requirement for Serious Cultural Journalists, which is painful if you happen to hate Game of Thrones.

Movie critics can see the bulk of major film releases, good or bad. More, films are only a couple of hours long. If you hate the latest Tom Cruise film—well, you can comfort yourself with the knowledge that it'll be over soon. Television shows are different. Even the relatively shortened seasons of quality television programming on Netflix or HBO are typically 10 to 13 episodes; after just a season or two you've got a solid 20 hours to get yourself current. A single television show is a lot of hours of television watching. The result is that people who hate a show tend to bail on it quickly. It's only if you love it that you keep up.

And that leads me to wonder—are we really experiencing a Golden Age of Television? Or is the critical consensus simply an artifact of the built-in formal biases of television criticism in an era of serialization? Critics don't tend to watch shows they don't like. With serialized storylines, it's hard to write about a show you hate without seeing all of it, and who wants to do that? Maybe it seems like a Golden Age because everyone is writing about how much they like whatever they can stand to watch. Only those who love Wynonna Earp will write about Wynonna Earp. The rest must fall silent—or, at least, admit that maybe it suddenly becomes a work of genius 30 minutes in. My family and I will never know.