Not just another rote superhero film. A- 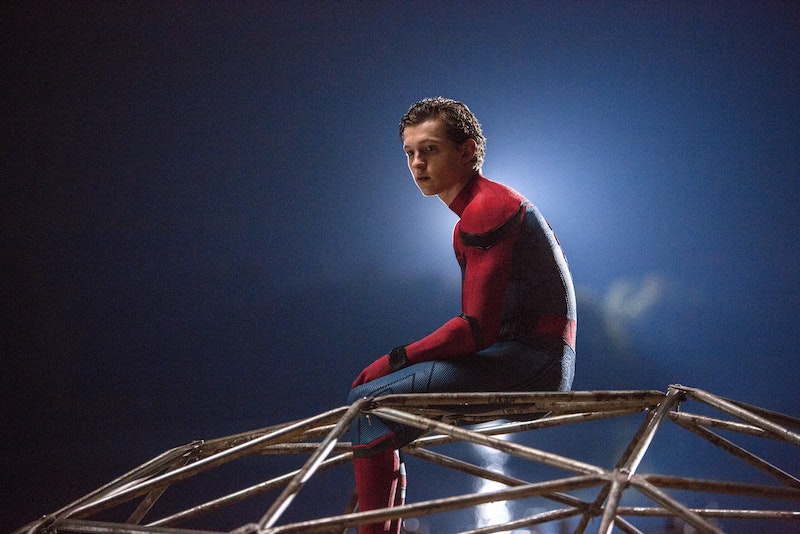 The Spider-Man movie franchise begins its third go-around with Spider-Man: Homecoming, and it’s a nearly complete triumph. All it took was going back to high school.

Unlike the pair of misbegotten Amazing Spider-Man films (2012 and 2014) that starred Andrew Garfield, this isn’t just another rote, going-through-the-motions, reiteration of the Spider-Man origin story, made for obvious IP-maintenance purposes. In fact, it’s not an origin story at all.

Spider-Man: Homecoming is the first one made following the character’s absorption into the Marvel Cinematic Universe, as previously teased in some of the better parts of last year’s Captain America: Civil War, when the new Peter Parker (Tom Holland) was brought into the Avengers’ orbit under the tutelage of Iron Man (Robert Downey, Jr.).

Downey is back in the new film, in a sort of mentor role. Meanwhile, the villain is Michael Keaton, returning to superhero movies after all these years, and borrowing some mannerisms and facial tics from his old rival from Batman ’89, Jack Nicholson’s Joker. It's one of the better recent bad-guy performances in recent comic book blockbusters.

The film avoids most of the typical mistakes of films in its genre. The tone is joyful and light. The action sequences don’t feel typical, and the final battle, near Coney Island, seems to recall Spidey’s final battle in the second Sam Raimi Spider-Man film more than any of the Avengers stuff previously. There are also dynamite sequences set at the Washington Monument and on the Staten Island Ferry. One much-teased bit in the finale seems to borrow a beat from the 1990s action movie Executive Decision.

What really makes Spider-Man: Homecoming sing is that it makes Spider-Man what he should be: A kid. And unlike Tobey Maguire, who was obviously in his late 20s when he was playing the part, Holland, who’s 21, is absolutely believable as a teenager. He resembles the late actor Anton Yelchin so much it’s almost uncomfortable.

Everything about the high school in the movie is just perfect. The school, a Queens science high school, is reminiscent of the kids from Stranger Things—it’s diverse, in ethnicity, as well as the different nerd subcultures represented. Highlights include Jacob Batalon as Peter Parker’s sidekick, Laura Harrier as his love interest, Zandaya as a snooty classmate and Tony Revolori—Lobby Boy!—as a rival.

The hire-the-director-of-an-obscure-indie-and-put-him-in-charge-of-a-blockbuster formula has had mixed results in recent years, most notably with nearly every recent Star Wars film and, well, the last two Spider-Mans (both from the director of 500 Days of Summer). But it’s worked here with Jon Watts, whose only previous feature directorial credits 2014’s horror film Clown and the following year’s Kevin Bacon thriller Cop Car.

Megan Leavey Is a Decent Iraq War Film. B

Megan Leavey at first comes across as the kind of story aimed at the sort of forced-inspiration associated with local TV news-style viral content, and Upworthy.com: the true story of a female Marine! And a dog! And their loving relationship! It’s the sort of movie certain to appeal to people with “Who rescued who?” bumper stickers on their cars.

But the film is actually touching and affecting. And while it’s not a high bar to clear, it probably goes in the upper third of Iraq war films. Directed by Gabriela Cowperthwaite, who made the anti-Sea World documentary Blackfish, Megan Leavey stars Kate Mara in the title role, as a young woman who enlists in the Marines as a K9 handler and bonds quickly with the bomb-sniffing dog, named Rex. The first third is Megan’s pre-Iraq life, at home with her mother (Edie Falco). The second is in Iraq, including some nifty combat footage, and the third revolves around Megan’s quest to adopt Rex once she returns.

Mara, best known from House of Cards, doesn't have the greatest range, but this is her best big-screen role. In a strong supporting cast, Common especially stands out as a drill sergeant, while Bradley Whitford, as Megan’s dad, plays a very different (and much better) father than he did in Get Out.

One odd thing in the film: towards the end, Leavey enlists Sen. Chuck Schumer, played in one scene by an actor who looks absolutely nothing like him. Why didn’t Schumer, who loves the camera like few politicians, agree to a cameo?