Marking the arrival of Kumail Nanjiani as a major comedic voice. B+ 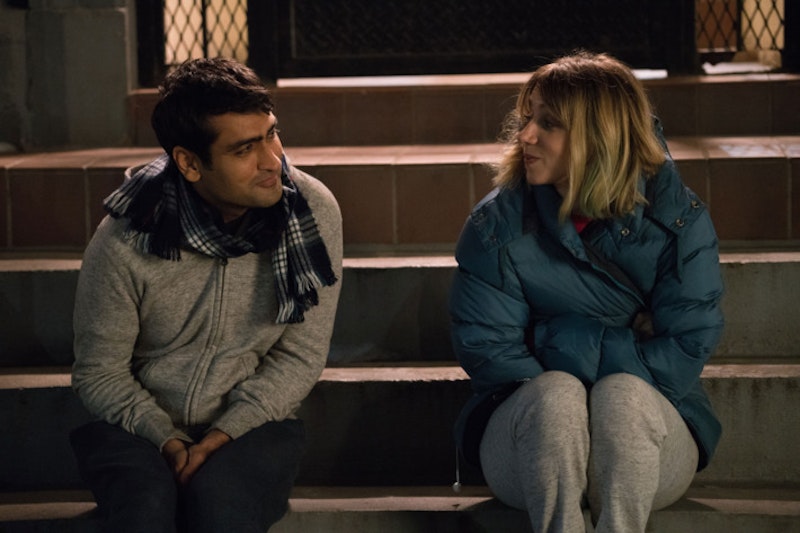 The Big Sick, like Amy Schumer’s Trainwreck last year, is a Judd Apatow-produced comedy that applies the usual Apatow raunch/romance formula to a particular comedian. This time, it’s comic and Silicon Valley actor Kumail Nanjiani and more specifically his early courtship with his now-wife Emily V. Gordon. The film is very funny, at times affecting, and marks the arrival of a major comedic voice. Only a couple of flaws keep it from true greatness.

Nanjiani plays a character with his real name, an aspiring comedian in Chicago who moonlights as an Uber driver, while dodging attempts by his Pakistani immigrant parents to set him up in an arranged marriage. But then he begins dating Emily (Zoe Kazan), while trying to keep it a secret from his family. Soon, a health crisis strikes, bringing the now-estranged Kumail into contact with Emily’s parents (neurotic Ray Romano and spitfire Holly Hunter).

Directed by The State veteran Michael Showalter, The Big Sick is a traditional “boy meets girl, boy loses girl, boy gets girl back” plot, with the twist that for an hour in the middle, the girl is in a coma. That Nanjiani and Gordon are the credited screenwriters may qualify as a spoiler, but nevertheless, the flirty chemistry between Nanjiani and Kazan is absolutely crackling, and probably the best thing about the movie. Kazan is always appealing, and while Silicon Valley almost never lets Nanjiani’s character have girlfriends, he holds his own in that respect just fine too.

The Big Sick may sound a lot like Aziz Ansari’s outstanding Netflix series Master of None—a romantic comedy starring a South Asian comedian and sitcom star, essentially playing himself, as he juggles his career, his old-world immigrant parents, and his white girlfriends—but the vibe is different. Not far behind, though, is everything with Hunter and Romano. Hunter is rarely in movies today, but when she is, we see what we’re missing. As for Romano, he’s emerged as a surprisingly interesting character actor, in both movies and TV, in his post-Everybody Loves Raymond career.

The segments with Nanjiani’s family are also hilarious, and more importantly, they’re respectful of both sides of their intergenerational conflict. It’s a story that’s been told in movies all the way back to The Jazz Singer, but The Big Sick finds a new way to tell it. Anupam Kher, also the father in Bend It Like Beckham, which had a similar conflict, and Zenobia Shroff are memorable and heartbreaking as the parents, while Adeel Akhtar has some funny scenes as his brother.

One big weakness? The inner-lives of stand-up comedians side of the plot is something we’ve seen many times before, and doesn’t bring anything new to the subject. Apatow did it himself, in fact, in Funny People, and it’s already been the subject of multiple documentaries and about half the world’s podcasts. And not only that, but based on what we see of the Nanjiani character's stand-up, he doesn’t appear to be that good at it. And there should be a scene at the end, a certain conversation, that’s for some reason left out. Considering the film follows the Apatow playbook of running about 30 minutes too long, perhaps it could have used less stand-up and more of that.

Assuming the movie stuck with the facts of what actually happened in Nanjiani and Gordon’s courtship—and judging by a recent New Yorker profile, it mostly did—they’ve managed to turn the story into a winning, successful movie.