Film Review: Sofia Coppola Doesn’t Care if You Get The Beguiled

A socially progressive film that doesn’t check every box. A 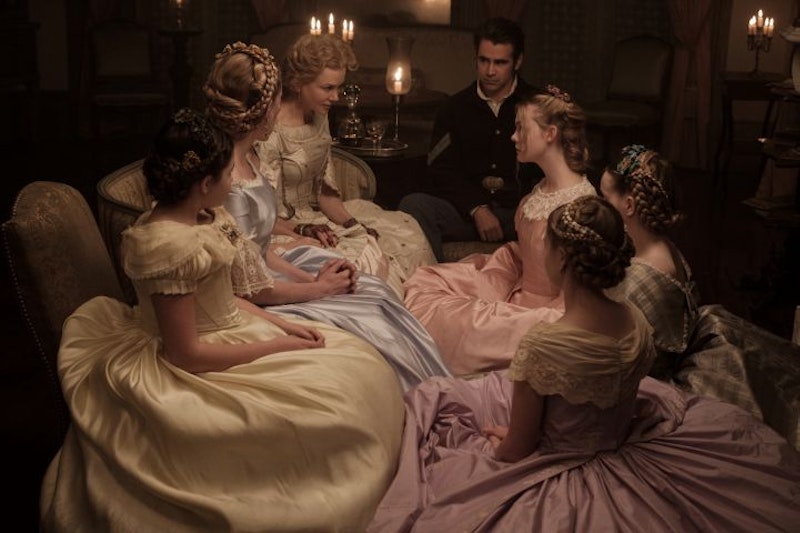 Sofia Coppola got a raft of shit for an interview she gave with GQ last month, revealing that she didn’t know what the Bechdel Test was. I love her response: “Oh, I guess I've never studied film.” Every time Coppola puts out a new movie, she has to answer the same boring, sexist questions about nepotism and competency. Nobody understood Marie Antoinette in 2006, but Roger Ebert was one of the few who got it: “This is Sofia Coppola's third film centering on the loneliness of being female and surrounded by a world that knows how to use you but not how to value and understand you.” Historical inaccuracies are a problem if you’re Ken Burns or Steven Spielberg, but when you have Kirsten Dunst as Marie Antoinette posing to pop music with Converse All Stars on her vanity table, don’t you realize pretty quick this is something different than Lincoln? Nobody cared when Quentin Tarantino had his “basterds” kill Hitler in a movie theater.

So magazines and blogs run features on whether or not Coppola’s films pass the Bechdel Test, all concluding with a shrug and a “sort of.” This Bechdel Test bit is just another way for people to criticize Coppola’s privilege: just another oblivious rich girl who happens to have made six fantastic movies about women and femininity with a fully realized aesthetic and voice and a host of obsessions completely removed from her father’s. Remember that Sofia Coppola’s debut in the public eye was The Godfather Part III, a bad movie blamed on her. Enough of this nonsense.

The Beguiled may not pass the Bechdel Test but it’s an historically accurate period piece that’s intense and subtle. Corporal John McBurney (Colin Farrell) is a Union soldier found near dead in the middle of Confederate Virginia by a young schoolgirl. She helps him back to her house—a girls’ school run by Miss Martha (Nicole Kidman). McBurney’s left leg is badly injured, and his presence is unnerving for these women of the Confederacy. Only six remain: the key players here are Kidman as Miss Martha, Kirsten Dunst as Edwina Morrow, and Elle Fanning as Alicia. They vie for McBurney’s attention and flirt in their own way: Kidman is the ice queen/dominatrix in another life, and Fanning acts out wry and aggressive teenage lust. Dunst’s character feels true love, a hopeless romantic that wants to go somewhere “far away” from where she's stuck. She’s the only woman that has any in-depth, meaningful emotional conversations with the soldier, and she’s the one that he falls in love with.

It’s a remake of a 1971 Don Siegel movie of the same name starring Clint Eastwood, one that’s much more exploitative and of the male mind: the women are broad caricatures and archetypes. In Coppola’s version, the women have agency but they’re not equally broadly drawn caricatures of “badass women”—they’re real people. Criticism of Sofia Coppola always comes back to her family, and the notion that rich people don’t understand what it means to be a human being. It’s an absurd thought, and even if The Beguiled doesn’t pass the Bechdel Test, it’s a beautifully shot and understated drama starring three of the best actresses in the world playing real people. No one is coasting here. The Beguiled is a great, culturally progressive film that doesn’t care whether or not it checks every box.