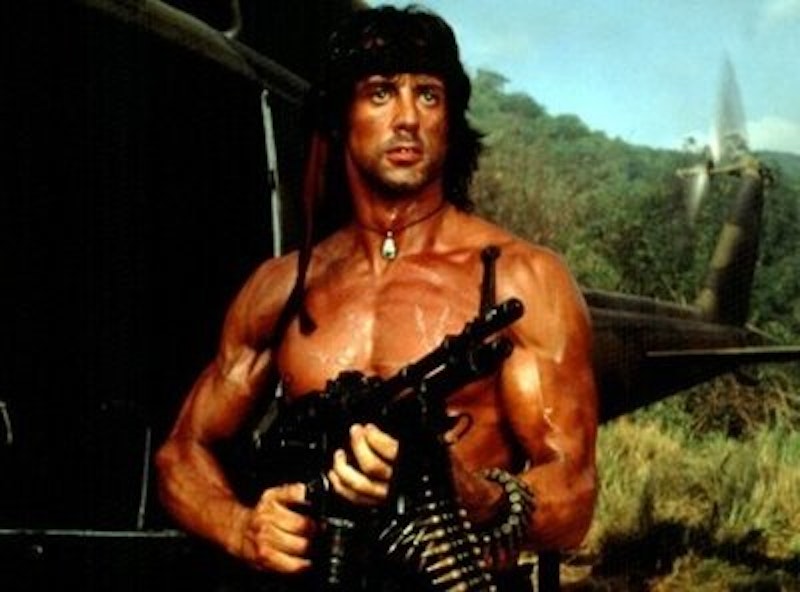 This is the second in a series on latter-day U.S. colonial wars. The first installment, on First Blood, is here.

The film First Blood (1982) is a reverse colonial nightmare; what would happen if the Vietnamese had invaded us? Rambo: First Blood Part 2, released three years later, is a more straightforward imperialist wish-fulfillment about going back and winning Vietnam for all the boys who were left behind.

Unsurprisingly, the straightforward shoot-up-the-commies narrative, with Sylvester Stallone bulked and oiled up, was much more successful than the more ambivalent original film. Still, some of the neurosis of the first lingers, faintly visible beneath the steroidal miasma. The viewer is supposed to identify with and cheer on John Rambo—as long as he’s in his "home” of Vietnam. The fact that Rambo is only really a hero when he's been transplanted back to ‘Nam sits uncomfortably with the film's putative plot, in which Rambo is supposed to rescue POWs and return them to the United States. America simultaneously wants to repatriate soldiers and keep them safely on the other side of the world.

That uncertainty is reflected in the plot. The opening starts out a few years after First Blood ends. Rambo is removed from prison by his friend and commanding officer Col. Trautman (a resolutely earnest Richard Crenna). He's supposed to go on a reconnaissance mission to find evidence of POWs still trapped by the Communist Vietnamese government. The mission is organized by Marshall Murdock (Charles Napier), who wants Rambo to fail. If POWs are found, it’ll cause a diplomatic and political mess that the civilian suits back home would much rather avoid.

You're supposed to hate the weak Murdock, and cheer when Rambo just about murders him at the film's stirring conclusion. But at the same time, the film surreptitiously sides with the commander in important ways. Rambo, we're assured, really does belong in Vietnam, not in America. Veterans should stay overseas—both to win glorious victories, and so we don't have to worry about them here at home.

The film indicates its discomfort with Rambo in part through race. One of the first things we learn about Rambo is that he’s not entirely white; Murdock looks through his files and discovers that he’s German and Native American; the commander describes this, with offhand racist essentialism, as "a hell of a combination."

Rambo, the arm of imperial aggression, is also, ancestrally, the victim of imperial aggression—and that indigenous ancestry is why he’s able to fight the war on Vietnamese terms. Rambo's signature weapon throughout the film is not the machine gun, but a high-tech bow. He spends the movie with his hair in an iconic tie, visually referencing latter-day images of Indians in headbands. When Rambo goes native, he’s returning to his own roots; the journey to Vietnam is a reassertion of his heritage. He’s given Native American ancestry to show where he belongs. Which is to say, in the logic of the film, all non-white people, even Native American people, exist most naturally in a dense jungle somewhere else.

That logic is bad news for Rambo, who’s abandoned by his own country; the helicopter landing to take him to safety turns around and flies away when Murdock realizes Rambo has rescued a POW. But the strict separation of those who belong in Vietnam from those who belong in America works out even worse for Co-Bao (Julia Nickson), the only woman with a speaking part in this obsessively manly film.

Co-Bao is a U.S. intelligence contact in Vietnam. She’s Vietnamese, but dreams of escaping the country and immigrating to America. Since she's actually working for the US government at some risk, she should have valid claims as a refugee—but the filmmakers will have no part of it. Immediately after she declares her love for Rambo and the two plan to escape across the border to Thailand and then on to a life together in the U.S., Co-Bao is shot and killed. This is done to motivate Rambo and, also because the filmmakers didn't know what else to do with her. The specter of a non-white woman living in the United States appears to have thrown them into a panic—or perhaps it's the idea of an interracial love affair. Either way, they can't kill her off fast enough.

Rambo takes Co-Bao's lucky necklace, and goes off into the jungle to murder her fellow country people in great numbers. When he has finally eliminated all the non-white people, along with a sizable contingent of sadistic Russians, he returns to base with a dozen or so American POWs in tow (they're all white, incidentally.) Rambo is angry and fires a machine gun at equipment and into the air. Trautman admits that Rambo has some reasonable grievances, but tells Rambo not to hate America. This gives Stallone the opportunity to chew up some scenery while bellowing about how he loves his country, but just wants it to care as much for him as he cares for it.

Does the film itself care for Rambo, though? In the first installment, Rambo has severe PTSD, including terrifying flashbacks, wild mood strings, and perhaps even extended hallucinations. There’s no suggestion that he ever received treatment while in prison, nor any concern about the possible emotional or psychological consequences of sending him back to Vietnam. Moviegoers love Rambo insomuch as he's a killing machine, and only because of that. The beaten, thin POWs are a narrative convenience; they barely speak, so uninterested is the film in their humanity. They're barely more present than the cannon-fodder Vietnamese.

The fact that veterans are dehumanized alongside the Vietnamese isn't accidental. The United States justifies its wars in part through racism; Asians, or Arabs, are less human than white people, and therefore are in need of paternalistic aid or genocidal chastisement. We cheer on our boys as they go about the gruntwork of imperialism—but we also mistrust them. Are they one of us, or one of them?  Rambo is racialized—he’s the animalistic sub-human he is fighting. Which suggests that as long as white supremacy justifies invasion and conquest, it will justify contempt for and mistreatment of veterans as well.