Where Have All the Chinese Vampire Fighters Gone?

The Legend of the Seven Golden Vampires: less racist than Dr. Strange. 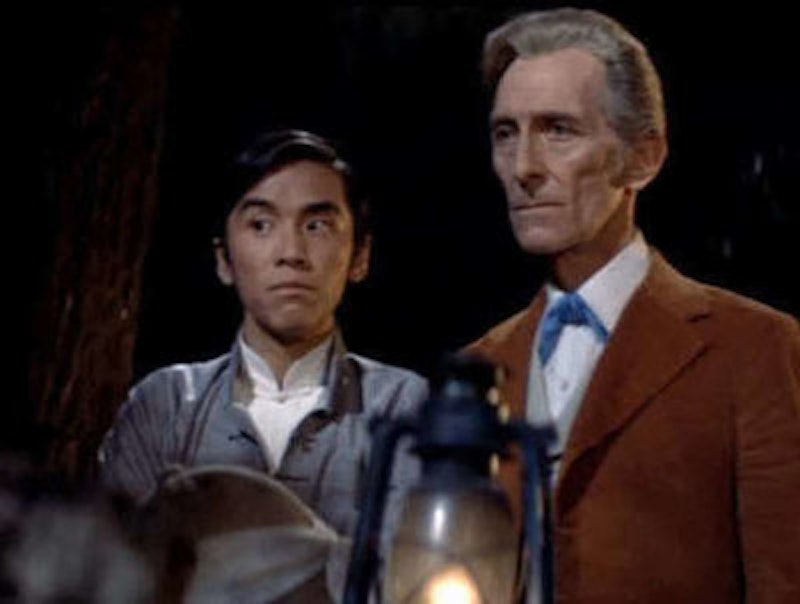 This is the last in a nine-part series on the Hammer Dracula films. Part eight is here.

The movies are, in theory, getting less racist. Over time, we're assured, there will be more visibility, and even more starring roles, for non-white performers. Progress may be slow, but, we'd like to believe, it's steady. In the past, there were only white stars; now, there are mostly white stars. In the future, there will be equality.

But is diversity really becoming more appealing and diverse? It's hard to make the case when you watch 1974's The Legend of the Seven Golden Vampires, the final film in the Hammer Dracula series. The preceding film, The Satanic Rites of Dracula, was a plodding, ill-conceived vampire/spy mash-up. Seven Golden Vampires tries a different tack, throwing Dracula fangs into a Chinese martial arts action adventure. The first scene shows a European peasant confronted on a Transylvania byway by a fierce, robed Chinese monk, High Priest Kah (Shen Chan).

The peasant does a comedic double-take—which nicely summarizes the film's approach as a whole. Seven Golden Vampires not only features a full complement of Chinese actors as heroes; it specifically positions white people as viewers.

In most Western films—today as in the past—Asian actors are sidekicks and mentors. They're the ones who watch, like Mr. Miyagi at ringside hoping for and encouraging that white Karate Kid. Asian audiences are encouraged to identify with white heroes.

In Seven Golden Vampires, though, the reverse is the case. White viewers, throughout the film, are pushed to place themselves in the position of the Chinese actors. In the opening sequence of the film, Dracula (played here by John Forbest-Robertson) appropriates High Priest Kah's body for his own nefarious uses. In the narrative, this is an evil act of possession. But practically, it means that a Chinese man has been given a chance to play the title role in one of Hammer's marquee series. Marvel can't bring itself to cast a Tibetan actor in a Tibetan role in the 2016 Dr. Strange, but back in 1974, that pale European Dracula was played by a Chinese man.

Dracula, the white guy, gazes into Kah's eyes and becomes him. Similarly, much of the rest of the film is staged as a spectacle in which white people watch, with excitement and enthusiasm, as Chinese stars carry the action. Van Helsing (Peter Cushing) is in China with his son Leyland (Robin Stewart) trying to investigate rumors of a village infested by vampires. He meets Hsi Ching, who grew up in the village in question and is determined to return with his sister and seven brothers to fight the vampires and bring peace to his people.

This could be a classic white savior set-up, with Van Helsing riding into the foreign village to vanquish evil and save the trembling natives. But instead, most of the heroism is displayed by the Chinese. Ching is played by David Chiang, a Chinese martial arts star, and he and his siblings perform numerous choreographed martial arts set pieces, taking down brigands and hordes of the undead with equal confidence and aplomb. Meanwhile, the Van Helsings and a wealthy Swedish widow Vanessa Buren (Julie Ege) marvel, just about open-mouthed, from ringside. After one dazzling pitched battle, Van Helsing gushes that he’s never seen anything so marvelous. It's like he's reaching out to the white people in the audience and shaking their shoulders vigorously. "David Chiang is the hero here! Isn't he marvelous?"

Dracula and Van Helsing encourage white people to imagine themselves as Chinese heroes. But, as so often in the movies, it's not far from wanting to be the hero to wanting to be with the hero. Early in the film, Leyland and Vanessa seem romantically attracted to each other—but that's quickly put aside once the Chinese stars leap into action. Leyland watches Ching's blue-garbed sister Mai Kwei (Shih Szu) take apart brigands with her two-sword fighting attack and gushes. One moment she’s a porcelain doll, he declares, the next she is a fighting tiger! The racial stereotyping is uncomfortable, but the intent is clear; Leyland is dazzled specifically by Mai Kwei's skill, heroism and beauty. She’s the first woman in a Hammer Dracula film who kills vampires, and Leyland, as the audience stand-in, is swept off his feet.

It's not that unusual for white men to be paired with Asian women in films. But Seven Vampires also embraces that very rare romance—an Asian man with a white woman. Just as Leyland's heart is set beating by Mai Kwei's swordplay, so is Vanessa won over by Ching's weaponless martial arts display.

A widow who travels alone, Vanessa early on declares that she loves danger and excitement, and her willingness to defy convention extends to loving the dangerous, exciting guy that Hollywood says she shouldn't love. In one brief scene, the two are shown lying down together; Ching is already asleep, and Vanessa leans over to cover him with a blanket. It's a tender moment, notable for the way it violates gender taboos as well as racial ones. In the Hammer Dracula films, it's virtually always men who take care of women, warming them when they are cold or comforting them when they're in danger. Guys are in control; that's how patriarchy works. But Seven Vampires, in undoing racial hierarchies also unravels gendered ones. The Hammer default tends to treat women as prizes. Vanessa and Ching, alone of all the couples in the nine films, come across as real friends and companions. You can see them making a life together.

Alas, it's not to be. Seven Vampires was co-produced by Hong Kong's Shaw Studio and was intended for Chinese audiences as well as Western ones. Nonetheless, Seven Vampires can't quite abandon white supremacist assumptions. Mai Kwei and Leyland kiss, but Vanessa and Ching never do… until the end, when Vanessa is bitten and transformed into a vampire. She in turn bites Ching, who, before he too is transformed, drives a stake through her heart—and then impales himself upon it. It's a tragic scene, and perhaps the only moment of real romantic pathos in the entire Hammer series. But it's also over-determined by racial preconceptions. Sexual intimacy between a Chinese man and a white woman is only possible via the abomination of vampire bite. Interracial couples are doomed—at least when the man isn't white.

The Mai Kwei/Leyland relationship also takes a tedious and predictable turn; she's captured, and, despite the fact that she's 10 times the fighter he is, he saves her, rather than vice versa. At the end, Kah turns back to Dracula and there's an anti-climactic struggle between him and that other European, Van Helsing. Ching and Kah are banished, and white heroes are restored to the center of the action.

Which is disappointing. Still, there's no doubt that the detour into anti-racism re-energizes the franchise. The by now familiar and somewhat tired tale of innocent women corrupted by the bad daddy and saved by the good daddy is replaced with inventive action set pieces, hopping ghoulish desiccated Chinese vampires, and some actual, surprisingly convincing gestures at romance. Seven Vampires isn't perfect. But decades later, it remains more imaginative than the vast bulk of current Hollywood films, which can't even work up the gumption to let the male Chinese hero and his white lover die in each other's arms.