Film Review: You Should Support Support the Girls

A humanistic feel that’s rare in mainstream entertainment. A 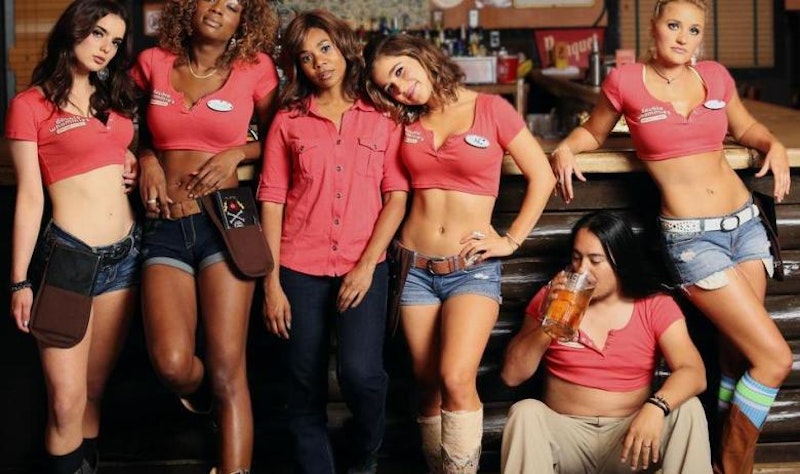 Not long before I began writing this review, it was announced that the restaurant chain Hooters was restructuring and closing many locations. This prompted some odd responses on social media, many of which did little to disabuse the popular perception that the franchise, infamous for its young waitresses in revealing uniforms, built its success primarily on the predilections of men settling for some strange middle ground between a strip club and a therapist’s office. Many casual dining chains are designed to foster an ersatz sense of warmth, whether it’s the family-friendly atmosphere of an Applebee’s, the bro-y familiarity of a Buffalo Wild Wings, or the bizarre architectural mishmash of the Cheesecake Factory. It’s a ruse, as is every business purporting to make family of its employees. These are places of work, with many people smiling their way to weariness each day trying to make ends meet.

Support the Girls finds the camaraderie in working a shitty job and explores it with a down-to-earth, humanistic feel that’s rare in mainstream entertainment. Writer/director Andrew Bujalski started out as a pioneer in mumblecore, and maintains that tone even when working with stars like Regina Hall. Hall plays Lisa, manager at a Hooters-esque joint called Double Whammies, equal parts den mother and wrangler for a squad of various waitresses. On one particularly hectic day, she has to balance getting the place’s cable fixed in time for a big boxing match, dealing with a would-be burglar who gets trapped in the ductwork, putting on an impromptu car wash to raise funds for one girl’s legal fees, and concealing the fundraiser from her boss, Cubby (James Le Gros). This is a story built out of minor incidents that amounts to a tremendous meditation on getting by.

The script and especially the performances from the ensemble do terrific work pulling and prodding at the contradictions within low-wage work (and by extension work in general). There’s no love for Lisa or the girls from above, but they do what they can for each other—exemplified both in obvious ways like the car wash and in innumerable little gestures. But the film also has no pretensions about the bottom line at a job—characters get fired at will, sometimes with a brusqueness that makes the brutality of a Game of Thrones murder seem compassionate.

The movie draws sharp contrast between the emotional labor the women perform for their mostly male clientele (as well as one loyal female regular played by Orange Is the New Black’s Lea DeLaria) and their genuine attempts to make one another’s day just a little bit better. Everyone, even the mostly apathetic and exploitative Cubby, express small humanizing details. Special attention goes to Hayley Lu Richardson as the sweet, bubbly Maci and Shayna McHale (rapper Junglepussy acting for the first time) as the cool-headed Danyelle.

Support the Girls impresses with its close attention to human interaction, and the myriad ways different people’s foibles collide or agree. A winsome film, it’s destined to be overlooked by the majority but beloved by the few who discover it.