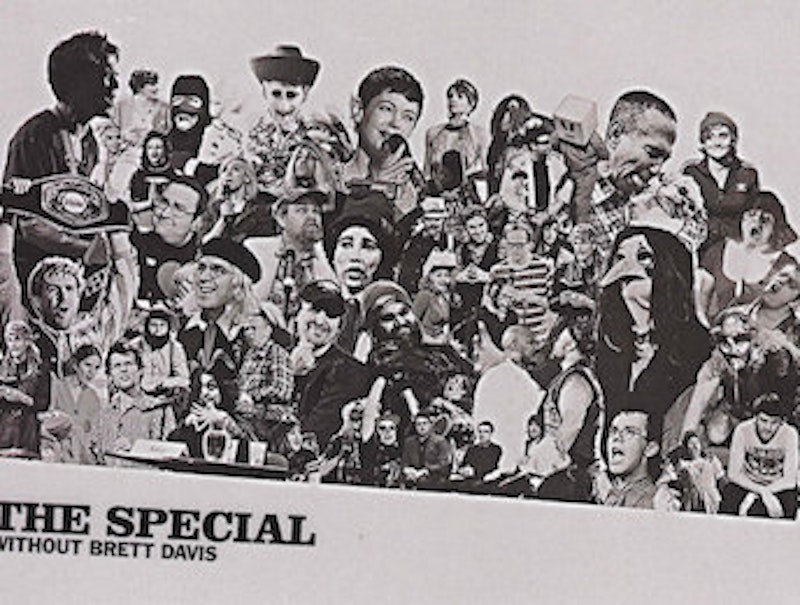 Part I is here.

During its first season I was an audience regular for The Special Without Brett Davis, showing up to MNN Studios Wednesday nights at 10:30 with all the other "Specialists.” Prior to working for the program as a production assistant, Darren Mabee and Frank Flaherty convinced me to perform as an extra on several episodes, and once as a co-star, where I played a wordless part as "Lil Abe The Amish Executioner" in an episode that featured The Special's biggest guest star: Gilbert Gottfried. The premise of this episode dealt with reckless hedonism and the Amish Rumspringa tradition. It also included the first appearance of Tynan DeLong and Joe Rumrill as Bizarro World party animals The Scunts. Gottfried was right at home surrounded by these spastic frat-like loonies, twisted Bible-thumping Amish characters, the wild musical guest (a crust punk band named Pox), the undisputed King Of Corn himself Steve "Mr. Jokes" Whalen, and all the show's regulars.

When the cameras were off, the veteran comedian known for his screaming aggro delivery was about as intimidating and confrontational as a pensioner ordering breakfast at your local deli. Gottfried was the most charming celebrity I've ever met. He wasn’t on the show to promote an upcoming movie or comedy gig but there instead to hype The Amazing Colossal Podcast, a fascinating program in which he and co-host Frank Santopadre interview artists and actors from Hollywood's Golden Age horror films. This made Gottfried even more endearing. It was comforting to know that this comedy force of nature, an international celebrity beloved by generations of fans, was in fact a fanatical movie nerd just like many of the obscuro comedians and fringe culture addicts who showed up that night to get his autograph and indulge in The Special's irreverent mayhem.

The illustrious Joe Nolfo worked as a producer and camera operator for The Special. Nolfo and I became friends after sharing the same D train ride home many nights after the show wrapped from 2014 to '16. Since The Special was a volunteer-run show the turnover rate for the crew was high. Few people stuck around behind the scenes when the only compensation was internship experience, IMDB credit, and such. I had a desire to expand my skills as a video artist so the chance to take part in a live TV production was crucial. One cold night in late 2015 I rolled up to MNN just to watch another episode when Joe approached me, exasperated, complaining of an understaffed crew. If memory serves, Joe's words were something like, "You're here every Wednesday anyway, you clearly love the show, why not help out?"

I couldn't argue and for the next four years I took calls from viewers, ran a teleprompter, cued up digital graphics, operated a TV camera, stood in as Brett Davis' masked character The Grand Inquisitor in a fight scene while Brett concurrently played Smith on the second production of Truth Or Myth With Smith, moved sound equipment and every type of prop imaginable (everything from awkward heavy risers and furniture to an entire micro-sized cardboard city that was part of Kaiju Big Battel's guest appearance), and helped construct props, decorations, and wardrobe items under the guidance of the MacGyver-esque art director Jordan White. Showing up to work at The Special I entered the studio in suspense because I could never predict exactly what task I'd be assigned, who I'd be working with, or what the show's plot would be from one episode to the next.

Another adventurous element of The Special was its ever-changing supporting cast and diverse collection of guest stars, including some names you might never expect on a strange low-budget comedy show: the ominous ECW wrestler New Jack (recipient of several felony assault charges all stemming from incidents in the ring,) Michael Alig, the infamous 1990s rave promoter portrayed by Macaulay Culkin in the cult film Party Monster (Alig had been convicted and sentenced to 17 years in prison for manslaughter; he appeared on The Special fresh from stir to promote his newfound career as a fine art painter crafting primal imagery inspired by celebrities and electronic media), and appearing twice as a guest was the 90s MTV VJ/legendary bullshitter Jesse Camp. Other notable guests included commercial actor Timothy Williams, Richard Kind, Artie Lange, Rose McGowan, Tom Scharpling, Janeane Garofolo, and two-time Academy Award nominated actor Michael Shannon (who appeared once as a guest actor and once as a musical guest with his rock band Corporal).

In addition to Brett Davis and Darren Mabee, The Special's regular cast included co-stars who remain among the most innovative comedians, directors, performance artists, and actors working today. The supporting artists' contributions to The Special were equally as important as anything created by Brett or Darren, but there was one who nearly overshadowed the pair every time they were on the show. This was the comedian/performance artist/supernatural provocateur Lorelei Ramirez. Lorelei's Special appearances were charged with slow burning energy and a haunting atmosphere that miraculously never stifled the laughs; it was clear that this performer could be just as comfortable on SNL as in something like Texas Chainsaw Massacre or Eraserhead. The minute Ramirez entered a scene everything changed. It was breathtaking to see a performer who had the power to effortlessly shape any kind of situation to fit an eccentric style. Ramirez continues to blow minds in NYC with numerous solo shows, guest spots at live comedy events all over Brooklyn, and in various shorts produced by Adult Swim and Wham City Comedy. Ramirez even dabbles in experimental music recordings and cartoon illustrations that are all tied together by the same incomparable thread of grotesque hilarity that defines their humor.

The Special Without Brett Davis didn't simply recontextualize fringe comedy. The spirits of Judy Tenuda, Brother Theodore, and Conan O'Brien hovered over its awkward situations and anti-social characters, but uncomfortable laughs were never the main source of conflict and continuity. Like the "woke" satire of The Daily Show, SNL, Late Night with Seth Myers, etc. The Special's plot devices often came from a progressive viewpoint yet the show never pandered to a niche. Its use of comedy as a malleable ever changing language made it one of the most original and challenging TV shows ever made. Its embrace of public access media tropes was also radically different when compared to other modern TV programs in which low-budget aesthetics appear only for absurdity's sake (i.e., The Eric Andre Show and Tim Heidecker's work). The Special created a distinct milieu in which the 4th wall could be destroyed in a spectacular fashion. I don't know if there's such a thing as a "5th wall" but if there is The Special joyously annihilated that too, as well as the 6th, 7th, and every other wall that could possibly separate reality and fantasy, good and evil, the mundane and the surreal.

This dynamic approach to comedy lives on in Davis' current work with Showtime's Our Cartoon President, The Podcast For Laundry, and his "lone man" live shows as John Gentle, and in Darren Mabee's new projects; Mabee creates video/radio content for WFMU, works as a freelance producer for The Real Housewives franchise, and he works for a Vermont pro-wrestling outfit doing color commentary in character as the body slammin' hillbilly Bingo Blayze (the fictional wrestler Bobby Blayze's uncle/cousin).

But the best way to experience The Special's crazed magic is to just watch the show. Here are the most iconic hilarious episodes of The Special Without Brett Davis:

"The End"—Only in the upside down world of Brett Davis and Darren Mabee could a finale serve as a TV series' perfect starting point.

"Miericoles Enorme", You don't need to be fluent to find the humor in this 100 percent Spanglish episode starring Lorelei Ramirez, Ana Fabrega (a regular on At Home With Amy Sedaris and star of Los Espookys), and Julio Torres (SNL writer/Los Espookys star). This one’s a rarity in the series because it doesn't feature a single Brett Davis character. What do obnoxious daytime TV talk shows, perverse redhead obsessions, and the subversion of Hispanic stereotypes have in common? I have no idea, but this episode made a hilarious effort to tie all of those things together.

"Rumspringa" For all the We Are The Seahorses fans out there, this one might be the best episode for you to start with since ex-Seahorses Sally Burtnick and Darren Mabee shine in some of their funniest on-camera interactions. The chemistry between Brett and guest star Gilbert Gottfried also brings the non-stop laughs.

"The Chris Gethard Show". Brett and Darren bit (more like shredded) the hand that fed them with this ULTRA VIOLENT satire of The Chris Gethard Show. Davis played the role of Gethard; Timothy Williams (aka "The Trivago Guy") guest stars and appears genuinely uncomfortable when intimidated by a gang of terrorist goth ghouls.

"Truth or Myth With Smith 2". Nothing can prepare you for this tragicomic hallucination that dramatizes a public access TV show's gradual descent into madness. This is The Special's artiest and weirdest moment.