Why compress such a rich text into an incoherent highlight reel of a movie? D+ 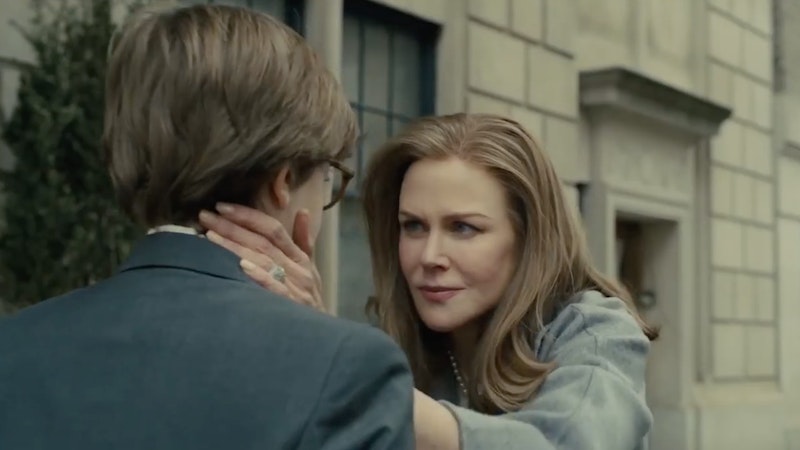 I haven’t read Donna Tartt’s 784-page novel The Goldfinch, so I’m in a good position to judge whether or not the new adaptation, directed by John Crowley and written by Peter Straughan, works as a film. It doesn’t. I’ve been meaning to read Tartt’s three doorstop novels for years, but Hollywood caught up with me. I’ve been disappointed by so many movies based on books I love this decade—The Circle, American Pastoral, Indignation, The End of the Tour—that I felt, maybe, The Goldfinch could go at least get me to read the book, or The Secret History or The Little Friend. But I’m burnt out on goldfinches, I’m burnt out on precocious mutes, I’m burnt out on bad Russian accents.

The tapestry and depth of detail in Tartt’s novel can only be intuited here, because there’s nothing on the screen. A good cast—Ansel Elgort, Nicole Kidman, Jeffrey Wright, Sarah Paulson, Luke Wilson—is left stranded in discrete episodes that could’ve made for a great mini-series. But they have no room to breathe here, and their organization makes no sense, the decision to scramble Tartt’s straightforward chronology has produced a highlight reel that might excite some rabid fans (half a dozen people in the matinee I saw clapped at the end, bizarrely), but is incomprehensible to everyone else.

The Goldfinch’s sprawl and cast of characters is too vast for a long movie. Basically, a wunderkind named Theo (played by Oakes Fegley as a tween, and Elgort as a young adult) finds himself in the wrong place at the wrong time when The Metropolitan Museum of Art is bombed—the terrorists and their motives are never revealed or speculated on. Theo’s mother is killed, along with almost everyone else. In the chaos, a dying man begs Theo to take a ring to his partner, Hobart or “Hobie” (Jeffrey Wright), along with “The Goldfinch,” a Dutch painting from 1654. Fucking hell… and there’s the Las Vegas section with Boris, played by Finn Wolfhard as a boy (with an atrocious attempt at a Russian accent, like Rocky & Bullwinkle level), and Aneurin Barnard as a young man.

I’m told the Las Vegas section is at least 150 pages of the book. I’m not going through the rest of them, just read the Wikipedia page. I’m taking as much care here as the filmmakers did with Tartt’s obviously overflowing novel.

The only press I saw beforehand was this: “The Goldfinch Movie Adaptation Is Faithful to a Fault.” In The Atlantic, David Sims wrote, “Theo locks away his feelings after the death of his mother; because the script lacks Tartt’s long internal passages, he appears as a blank slate: a polite, quiet, intermittently thoughtful boy who can never quite leave behind the childhood event that defined him. Much of the narration is provided by Elgort, a fitfully charming actor whose best performance to date (in 2017’s Baby Driver) was a largely silent one. His flat voice-over conveys nothing but the facts of Theo’s life—any real emotion is absent.”

I didn’t mind Elgort’s performance, though I’ve only seen him in Baby Driver where the blank slate affect obviously worked, and I assumed Theo was a similarly possibly autistic and traumatized kid that kept to himself.

In an era full of mini-series based on novels (usually well received), and an era where the original, long, semi-intellectual “adult” dramas have vanished from multiplexes, why waste hundreds of millions of dollars just to butcher The Goldfinch? A.O. Scott said that The Goldfinch, “looks and sounds like a movie without quite being one. It’s more like a Pinterest page or a piece of fan art, the record of an enthusiasm that is, to the outside observer, indistinguishable from confusion.” Dissenting, Pete Hammond wrote for Deadline, “A lot of critics will predictably review the book instead of what is on screen.” That may be true, so I can say with certainty the film just doesn’t work on any level. Praise the predictably gorgeous cinematography by Roger Deakins all you want, but when the cinematography is a movie’s only saving grace, it’s in trouble. A good script can only suffer so much, and inspired direction can take a nothing script and turn it into a masterpiece.

Same with structure and pacing: a movie can feel like it’s going nowhere until the last 10 minutes, when one shot, or one exchange brings the entire project into focus. David Lynch has his “eye of the duck” scenes, Ozu has his devastating endings, and Altman similarly synthesized his movies’ arguments and themes in short sequences and even single shot-reverse shot moments, such as the ending of California Split, or Paul Newman as Buffalo Bill screaming at Sitting Bull, revealed to be a hallucination in one absolutely stunning wide shot. No other moment in recent movie-watching memory has so completely nailed “white male privilege” as that wide shot of Newman sitting dejected and alone and small. No words necessary.

I feel bad for fans of Tartt’s novel, because the ingredients are here for a phenomenal TV show. The performances are strong and each section is screaming to be expanded. These characters—from Luke Wilson’s layabout grifter dad, to his whore wife Sarah Paulson, to Jeffrey Wright as the only truly Dickensian character here, to an excellent appearance by Denis O’Hare as a scummy, fey art dealer—they all deserve their own hour or two. So much is elided in Crowley and Straughan’s adaptation, and the completely confused and arbitrary non-chronology renders The Goldfinch impossible to decode for anyone unfamiliar with the book.