1971 horror film Graveyard of Horror stands out with its depiction of the unknown. 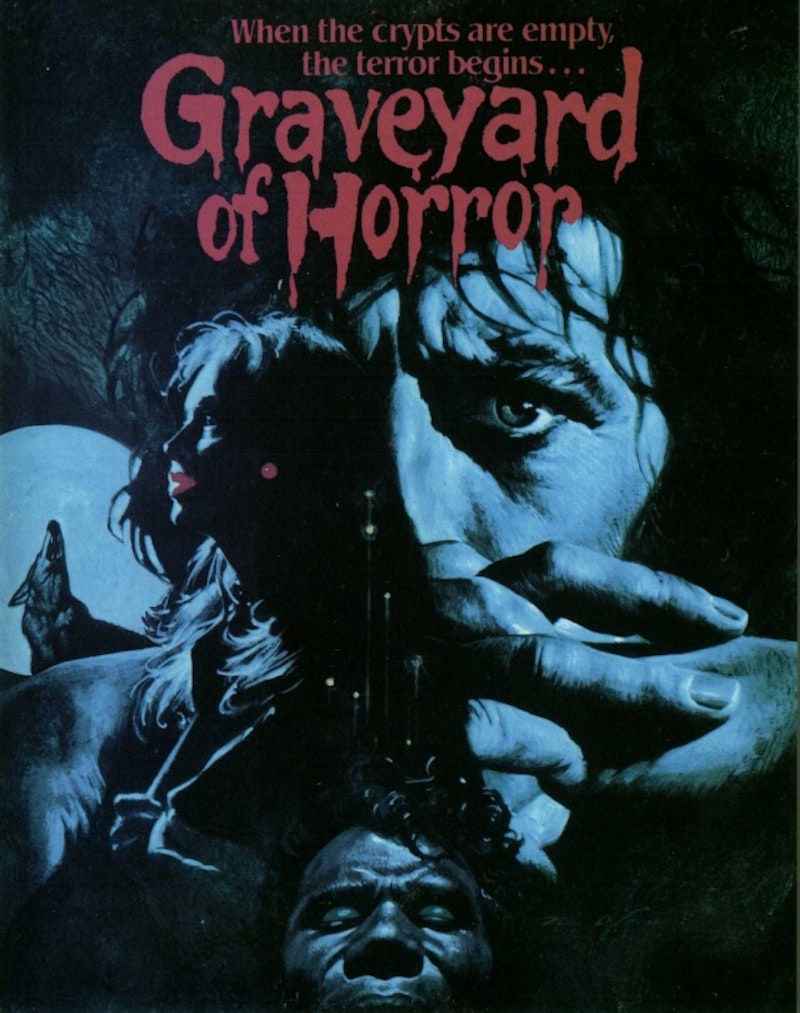 1971's Graveyard of Horror has a corny derivative title that hides a unique subversion of the slasher film. This obscure Spanish cinema verite is a supernatural fantasy shot on a shoestring budget yet loaded with priceless mysteries. Its disorienting imagery is fractured by poorly-dubbed chunks of melodramatic exposition. These unfold with all the hallucinogenic grandeur of the film's more action-packed moments. Just as lips move and mouths gape with and without sound in conversation scenes, the plot twists and story arcs of Graveyard of Horror barely sync up leaving the viewer with a film of distorted beauty that's both a lurid horror and a lost classic of the 1970s Euro underground.

Graveyard of Horror centers around Michael Sherrington (Bill Curran), an American who returns from a long trip abroad to the creaky Scottish estate where his wife lives with her family. Upon his return, Sherrington’s told his wife has died in childbirth. Further details of her death are withheld by the local doctor and authorities who encourage Sherrington to dig up his wife's grave, the first of many illogical events that define the story. At the graveyard we find even more nonsense: the sinister Dr. Lexter (Frank Brana) hides in crypts and mausoleums with hooded ghouls and a weasley caretaker (Victor Israel). They dig up bodies for experiments in re-animation and to feed the cannibalistic undead creature that used to be Sherrington's deceased brother, a scientist who pioneered these experiments.

Lady Anne and her three daughters (the mother and sisters of Sherrington's wife) add plenty of sketchiness. These four women (Catherine Ellison as Lady Anne, Maria Paz Madrid as Barbara, Maria Shiero as Pamela, and Titiana Clement as Lilith) are not scream queen eye candy. They skulk in shadows clad in far-out leather and gold medallions, snarling, screaming, and generally acting suspicious. The dramas they share range from jealousy and entitlement to a possible connection to the death of Sherrington's wife.

Confusing? Absolutely. Everything about Graveyard of Horror is baffling in a way that perfectly complements the film's drugged visuals. So many loose ends in this film. The shaky camera work coupled with the $2 special fx heighten the confusion, making the movie seem more like a psychological experiment than a horror film. The undead monster receives tight close-ups edited into other scenes in short, jarring blurts which stand as the scariest moments. When the creature gets its big reveal we see a moss-encrusted rubber mask with razor-thin teeth slapped onto a zombie-like actor on the attack juxtaposed by overacting victims. The creature's movements are so stiff he or she can barely shamble along. The film's dissonant soundtrack further heightens the chaotic tension. This was created by composer Alfonso Santisteban, a legendary name in Spanish library music who also recorded the excellent single "Zorongo" for the Belter label along with countless public domain tracks used for film and TV throughout the 1970s.

Miguel Madrid was the writer/director who created Graveyard of Horror. This mysterious actor-turned-director made very few films. Graveyard of Horror is his acknowledged masterwork. It earned an award at the 1971 Cine De Terror Festival in Sitges, Spain, has been reissued many times on video from the 1980s to the present, and it can currently be seen regularly on various sci-fi and vintage movie channels.

Like many other delightfully befuddling gems, Graveyard of Horror was also part of American International Pictures' early attempts at breaking into TV syndication. In the US the film's debut didn’t occur on a big screen in some freaky urban art house but instead went direct to television where it was shown side-by-side with insane AIP monsterworks by K. Gordon Murray and Larry Buchannan (whose gritty 1968 epic It's Alive is the less nonsensical US equivalent of Graveyard of Horror).

Supernatural phenomena is often described as unexplainable. Too often this fact is overlooked in horror films, particularly in regard to how their narratives unfold. Graveyard of Horror does as little as possible to explain all of the major plot elements that would normally be revealed with cold analysis in an average slasher film. The story builds organically, shrouded in many contexts that can be interpreted broadly: one scene depicts a child being attacked by the undead monster; there's no gushing blood or entrails splattered about. We see only a camera zooming in and out as a young actor is laughing maniacally. Has the kid been driven insane by fear? Or is this just an inept actor? The monster's face and claws receive the same blurry frenetic treatment. The two angles ping pong against each other in a dizzying cinematic dance that symbolizes the confusion of supernatural conflict.

This is a film that obsesses over only the most mysterious undercurrents of tragedy and death while ignoring the hackneyed conflicts of triumphant heroes and villainous monsters. It doesn't ooze chills and blood and never needs to. Graveyard of Horror stands out with a depiction of the unknown that's a timeless horror movie mutation.