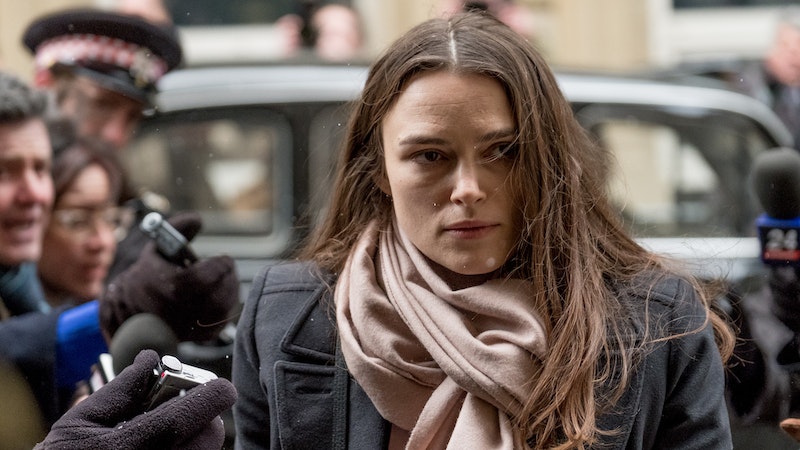 The tragedy of Official Secrets, a movie that takes place over 15 years ago, is that we’re still living through the damage and debris of two completely unnecessary wars in the Middle East. British citizen Katharine Gun may have been acquitted, but the war criminals that lied to the world about “weapons of mass destruction” still walk free. On the surface, Official Secrets looks like more straight to streaming mediocrity, a politically innocuous whistleblower drama about Gun and the lead-up to the Iraq War in early 2003, but it’s a brisk piece of recent historical fiction, and a relatively obscure but notable episode in the invasion of Iraq. Gun (played by Kiera Knightley) leaked an internal memo pressuring Britain to strong-arm allied countries like Cameroon and Guinea into allowing the Bush administration to have their war early without oversight or investigation. She gave it to a friend who showed it to a friend who showed it to Martin Bright (Matt Smith), a journalist at The Observer.

MI-5 find her, Bright’s story is discredited by an absent-minded copy editor, and Gun is brought to trial charged with violating the “Official Secrets” act—Thatcher's doing—her lawyers call the government’s bluff by pleading not guilty, thus leaving damning documents open to investigation. All charges are dropped, Gun gets to go home (of course we see the actual Gun leave the courthouse at the very end—for once, she’s not an ugly version of the star). Everyone gets to go home, even her poor husband who almost got deported—could Gun have possibly raced to “the first gate at Heathrow” and save her handcuffed husband from a deportation line about to board a plane to nowhere without any security problems?—but at the end of Official Secrets, there’s no reflection, because it’s not possible to reflect on the present.

Everything covered here is so disgusting, a constant disgrace that we all shoulder, a reality more offensive than anything Donald Trump could ever say. If we make it out of the Trump era without a war in Iran, he’ll leave office as the least harmful American president of the 21st century. This is a low bar, but in the chaos of corruption and silliness, people forget (or never figured out) that Obama and Bush were much worse for the world. To ignore foreign policy to condemn personal behavior—reprehensible as it may be—is pure narcissism and willful ignorance. I wonder how many people wearing pink pussy hats and campaigning for Elizabeth Warren right now know who Lula da Silva is, or the ongoing genocide in Kashmir.

Gavin Hood’s tight direction, a few goofy touches (all the chyrons), and its speed make Official Secrets feel more urgent and political than it is. Hood isn’t interested in echoing or rhyming with espionage movies like All the President’s Men, Three Days of the Condor, The Manchurian Candidate, or Klute. I thought of Spotlight, and this has even less going on stylistically, it’s a filmed Wikipedia article. Despite covering a successful, living whistleblower, the movie doesn’t look beyond the specifics of its story—it’s a fine one, perhaps embellished and dramatized here, but done well. Still, Iraq is an ongoing subject. Our occupation of the Middle East hasn’t ended, and Official Secrets treats this like a past event, which it should be. Thankfully, no offensive parallels are made to the Trump administration, or even Chelsea Manning and Edward Snowden. Hood’s take on Gun’s story is very literal and serviceable for what it is—unfortunately, we can’t condemn our governments of the past as the film asks us to, because things have only gotten worse.