The Only Op-Ed Columnist Worthy of Documentary

Raise Hell: The Life and Times of Molly Ivins is another stellar documentary in a year full of them. A- 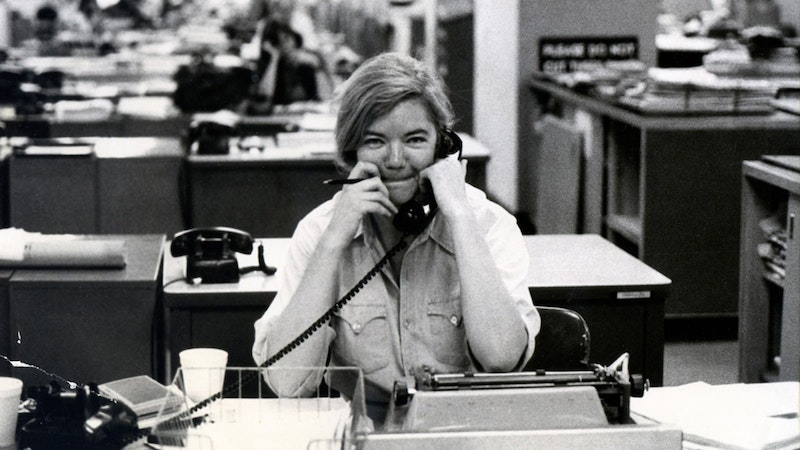 There's been heated debate in recent years, from across the political spectrum, about the makeup of The New York Times op-ed section. Among other problems, the newspaper decided to approach the Trump era with several representatives of the never-Trump conservative coalition, an ideology with little-to-no constituency outside of elite media circles. That, and the paper publishes other columnists (like Frank Bruni) who have been promoted to their natural level of incompetence.

There's one other thing about the current Times opinion columnist roster: there's not a single person on it whose life I could imagine being the subject of an interesting documentary. Well, maybe if they made one about David Brooks' midlife crisis, but I can't imagine he'd cooperate with it.

One documentary has been made about a giant of the op-ed form, whose work appeared in the Times during parts of her career. Raise Hell: The Life and Times of Molly Ivins, directed by Janice Engel, is an entertaining tribute to the firebrand liberal reporter and columnist, the sort of larger-than-life character that's all but disappeared from contemporary journalism.

The film, running about 90 minutes, is relatively straightforward: It goes through Ivins' life story using interviews with contemporaries, use of C-SPAN footage of her speeches and frequent talk show appearances, and close-ups of old newspaper columns. Making a documentary about a writer can be difficult, considering how un-cinematic a pastime the act of writing is, but Ivins gave her posthumous documentarian plenty of material, following her death from cancer at 62 in 2007.

We're introduced to the Texan Ivins as a liberal from an early age, who rejected the conservatism of her family, and then went off to Smith College. She became a professional writer quickly, having a stint as a reporter in Minneapolis that so antagonized the local police that they named a pig after her. She then got a big break in the late-1970s when she was assigned by the Times to cover Elvis' funeral, due to her understanding of Southern culture that most of the Times' newsroom lacked.

Later, it's on to national fame, as Ivins wrote for Texas papers before and after her Times tenure. The later part of her career was marked by battles with her fellow Texan, President George W. Bush, who she nicknamed "Shrub." Much of this fight, which at one point got her dropped by the Bush-supporting owner of her paper, The Houston Chronicle, took place as Ivins was treated for cancer.

Ivins is shown in old footage telling off-color stories about Texas politicians, and an old friend at one point refers to the writer's breasts as "those marvelous bazooms." She's often seen alongside another tough-talking Texan liberal woman, the late Gov. Ann Richards, about whom I'd love to see a whole other documentary.

The film, near the end, turns to what had previously been only hinted: Ivins, for most of her life, was an alcoholic. At one point we see a photo of her, behind the wheel of a car, with a beer in her hand and a dog on her lap.

The only misstep in Raise Hell is when it ties Ivins' life to modern day political battles, including footage of the Women's March and March For our Lives. That didn't need to be included in the film. But other than that, this is a first-rate examination of Ivins’ life.