Revisiting the mealy-mouthed melodrama of Magnolia. 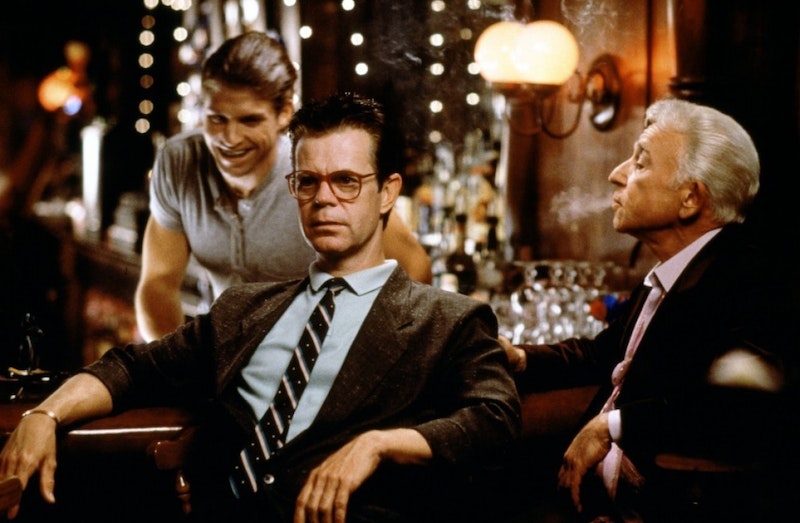 This is the first in a series of articles on American films from 1999.

Paul Thomas Anderson’s Magnolia was my favorite movie at 11. The scope, construction, and ambition bursting from Anderson’s direction were all intoxicating then. The idea that this guy, not even 30, could build this by himself—William H. Macy jokes in the making-of documentary That Moment that Anderson “developed the film in his bathtub, you know”—was inspiring. But when I first saw Magnolia in 2004, epiphany-core hadn’t reared its ugly head yet, and besides, I was on board with that first wave of music and film that would cement the pitch and presentation of car commercials from the late-aughts to the present: Garden State, Little Miss Sunshine, Sufjan Stevens’ Illinois, Arcade Fire’s Funeral. That waned with (500) Days of Summer in 2008, and by the time Bon Iver was immaculately conceived out of a cabin in Wisconsin, I was long off the bus. Xylophones would never sound the same. Ukuleles? An enemy of the people—an aberrated instrument of regression and folksy perversion. Epiphany-core offered songs, books, movies, and television about "everyone" for no one.

I realized last week that I hadn’t seen all of Magnolia in 15 years, and an hour in, I was completely dumbfounded by how terrible it was. I’ve never done such an extreme about-face on a movie, or an album, or any artist. It was shockingly bad, no better than the moldy and pretentious schmaltz of American Beauty and Garden State. But we know those movies are insufferably corny and blinkered. Magnolia hasn’t faced the same reevaluations, probably because Anderson has delivered on the boyish pursuit to become an auteur in the age of franchise films and streaming. If some were skeptical of Inherent Vice, or nonplussed by The Master (his best film), almost everyone was won over by Phantom Thread, where what Andrew Sarris called “strained seriousness” quickly evaporated into a loose and lightly perverted romantic comedy. Even Daniel Day-Lewis looked like he was having fun—maybe that’s why he decided to quit while he was ahead. Nearly 25 years into his career, Anderson’s reputation and place in the pantheon of American cinema is already assured.

Maybe you never liked Magnolia. Maybe you believe it was the frogs and Tom Cruise that killed the movie, even though its toady deus ex machina is by far the best thing about it. Cruise is also the only actor in the ensemble who delivers a well-rounded performance with depth, everyone else—all great actors—play histrionic caricatures of themselves. Julianne Moore berates nosy pharmacists, crying and screaming “YOU DON’T KNOW MY LIFE!” when they make cracks about all the Dexedrine and liquid morphine she’s ostensibly picking up for her dying husband, played by Jason Robards (in his last film role, a fine performance, but confined to a bed, merely a mannequin). Philip Seymour Hoffman, Robards’ nurse, is a whimpering tomato-faced parody of himself, relegated to crying or awkwardly ordering porn mags on the phone.

But the nadir of the movie comes after the frogs, as the camera pushes in on a bloody-mouthed William H. Macy: “I HAVE SO MUCH LOVE TO GIVE! I JUST DON’T KNOW WHERE TO PUT IT!” Macy also plays a cardboard cutout version of his popular persona, a pathetic and bumbling man who resorts to crime and fails spectacularly. Anderson is lauded for his writing, but few scripts have aged worse than Magnolia, a three-hour movie made up almost entirely of bumper sticker slogans and empty affirmations. There’s no characterization, and besides Cruise’s asshole pickup artist, none of the actors are given enough time because there’s just too many of them. So ensemble players like Jeremy Blackman, who plays a quiz kid champion with an overbearing idiot father, are given one scene to boldly state their part of the thesis: “You have to be nicer to me,” he tells his father at the end of the movie.

Everything I loved about Magnolia in 2004 was nauseating in 2019, and more than anything, shocking. I realized that beyond the opening 20 minutes, the Aimee Mann sing-a-long, and the frogs, I hadn’t actually seen most of the movie since then. Mann’s songs—like “Momentum,” “Wise Up,” and “Save Me”—are still fantastic, but the middle of Magnolia is coated in syrupy strings, emphasizing how ridiculous and sophomoric Anderson’s dialogue is. “This is something that happens,” whispers Blackman’s quiz kid as he watches the frogs fall, or Walters quoting an Aimee Mann song on a date with John C. Reilly. “Now that we’ve met, would you object to never seeing me again?” That’s when I reach for my revolver.

Even Anderson’s tracking shots and fast push-ins and dolly moves felt unnecessary and ostentatious, always foregrounding the presence of the whiz kid director. Boogie Nights has many of the same camera acrobatics, but it’s a much better film (and far surpasses its primary inspiration, Martin Scorsese’s overrated Goodfellas) because it’s from the perspective of one character. Ironically, we only see the surface in Magnolia, and besides Cruise, no one in the ensemble rises above an empty archetype, serving only as mouthpieces for Anderson’s wide-eyed ideas about life, death, and family.

American Beauty was re-evaluated as melodramatic trash years ago, but Magnolia is hardly better, and to me, is the one film from 1999 that deserves a once-over 20 years later. I like Anderson’s work. But if you haven’t seen Magnolia in years and doubt my diagnosis, revisit it. The disconnect between memory and what I saw last week was so vast I was laughing at the TV an hour in, in awe of a filmmaker falling on his face where I once thought he soared.