The first live action Pokémon movie is underwritten, but its premise and implications are almost enough to carry it alone. B+ 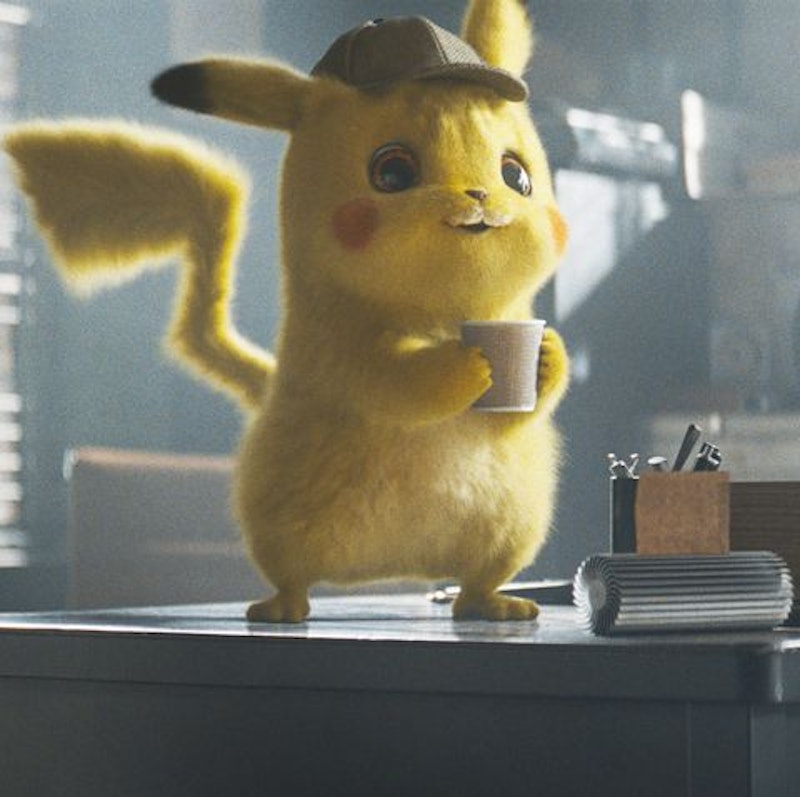 I want to thank my friend Gram for making sure we saw Pokémon Detective Pikachu while it was still in theaters. Not on an ironic lark, even though this movie is aimed at kids and cynical Millennials who grew up with Pokémon and would go stoned to something like this. Still, if critics and audiences have made one mistake this decade, it’s not taking The Angry Birds Movie and The Emoji Movie seriously. As I wrote two years ago, Wonder Woman is escapism, and The Emoji Movie holds a mirror up to our faces. Detective Pikachu—or Inspector Pikachu as I kept mistaking, eventually on purpose (it’s a better title)—is the first live action Pokémon movie. Live actors interact with CGI Pokémon for the first time. Technology is at a point where this blend is no longer automatically grotesque or uncanny: I believe I’m seeing Jigglypuff in the street, and Bulbosaur in the forest, and Lickitung on the train.

The idea of a gruff hardboiled Detective Pikachu voiced by Ryan Reynolds (clearly cast to perform a toned down version of his Deadpool persona—Danny DeVito was robbed) isn’t offensive or grotesque. I find the incestuous Marvel Cinematic Universe far more upsetting and boring. A trailer for the new Spider-Man movie played before Detective Pikachu and it looked awful: not only is that kid a lousy Spider-Man, but it’s part of the Marvel Cinematic Universe, so I guess they have to clear the bullpen for every fucking movie and get people like Nick Fury, Captain Marvel and Iron Man involved in Spider-Man’s affairs, which I find far more gluttonous than a movie about emojis or appliances (don’t you all know and love The Brave Little Toaster?)

The first 20 minutes of the movie are stunning: the practical and ethical realities of a world with Pokémon are finally explored in live action. They are the hunted, still living in the wild in most of the world. After a brief expository escape by Mewtwo, we move to two friends in a small town out in the woods. Tim (Justice Smith) is our hero, the obvious Ash stand-in, though it’s his friend Jack (Karan Soni) who gets to wear the red cap, faded and wordless—perish the thought that anyone would wear a MAGA hat in this universe. Jack has caught Pokémon, but Tim hasn’t, so they go roaming in the woods. In an open field, they spy a Cubone in the distance. I can’t overemphasize how jarring, frightening, upsetting, and perfectly executed this scene is. CGI is at a point where the Cubone is as real as any animal actor, and its cries of anxiety and frustration had a powerful effect on me. Tim approaches, goaded on by Jack, but the Cubone starts getting nervous, and when Jack finally makes his move and throws the Pokéball, the Cubone screams and tries to scurry away before he is sucked into the ball like the hunted and enslaved creature he is.

Tim’s called to Ryme City when his estranged father is presumed dead after Mewtwo’s escape, and when he’s on the train, we get a debriefing: ruled by the self-proclaimed “visionary” Howard Clifford (Bill Nighy) and his son Roger (Chris Geere, a dead ringer for Milo Yiannopoulis here, oversized aviators and receding hairline and all). Of course they are Murdoch stand-ins, but presented as benevolent oligarchs who wanted to establish a large city where people and Pokémon were of equal status (nevertheless, underground cockfight style cage matches still occur in what appears to be a vibrant underground all too briefly glimpsed in this film). As soon as Tim gets off the train, he’s on the streets and suddenly it’s a Michael Mann movie, it’s Heat with Pokémon wandering around in the blown out anamorphic background along with the toxic rain and neon lights. This is exciting—this is cinema!

The thrill of seeing childhood icons transposed to an adult world remains. It’s rated PG, but you know that Pokémon are smoking cigarettes, shooting drugs, and having unprotected sex in this universe, we just can’t see it yet. Pikachu is addicted to coffee, but besides that, the load is blown before he ever shows up. Pikachu is surprisingly underwritten, and Ryan Reynolds isn’t given much to work with here. Instead of curse words and other explicit activities, the movie resorts to bathroom humor. Twice Pikachu’s bowel movements are the subject of jokes. I resent this and find it… inappropriate to say the least. But most disappointing is Pikachu’s lack of charisma and characterization—the movie quickly becomes boring when its primary conceit never delivers. Whether they felt too restrained or simply felt they could rely on the novelty of having Deadpool do Pikachu, they’ve failed him. Thankfully it is not an embarrassment, or a horror, but still a waste of a killer premise.

The potential for class and racial allegory is enormous here, but unfortunately Detective Pikachu lags in the middle and never recovers, despite a great ending set piece where we see a parade in Ryme City featuring floats of various Pokémon including Pikachu. This of course is something we see every November in the Macy’s Day Parade, and Detective Pikachu would’ve benefitted from more time spent in Ryme City. Tim has an amusing Ash/Misty style rapport with Lucy Stevens (Kathryn Newton), a plucky cable news intern hot on the heels of the Clifford cover-up.

By incoporating familiar Pokémon of our youth into social commentary, the film becomes twice as powerful. One may be jaded by the sight of a human junkie strung out on the sidewalk, but what if it was a Charmander that was waiting for his methadone? What if Togepi was the worker that can barely scrape by even with three jobs? Worse still, what if we had to watch Pokémon be “put down”? Wouldn’t this be more engaging than another rote prestige picture about the death penalty starring Robert Pattinson and produced by Annapurna?

Pokémon is a universe unto itself that remains thankfully contained (for now). I look forward to more movies from The Pokémon Company and hope against hope that they will deliver an R-rated domestic drama or social commentary set in Ryme City. But one more thing: why must Pikachu or Ash be brought to the brink of death in every Pokémon movie? I’m sick of watching one of them almost die. Come on!