It's got a killer central hook, but where it goes from that point isn't all that wondrous. B- 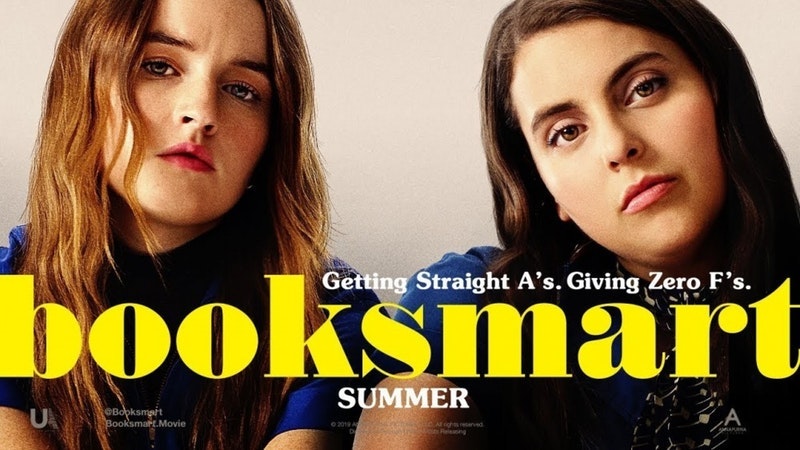 Booksmart is the latest entry in a subgenre that I'll call the Revisionist Teen Movie. Like Edge of Seventeen, Lady Bird, and Eighth Grade, it's structured like a traditional teen movie, but features female protagonists, who are further down the social and/or economic totem pole, while also adding in elements of feminism and political wokeness.

The new film, the directorial debut of actress Olivia Wilde, ranks about in the middle of the pack of those movies. It's got a killer central hook, but where it goes from that point isn't all that wondrous.

Lifelong best friends Amy (Kaitlyn Dever) and Molly (Beanie Feldstein) have spent high school studying a lot and not partying, believing that such a lifestyle was necessary for elite college admission and eventual success. But days before graduation, the two discover that their peers who’d spent the last few years screwing around are also going to elite colleges. Amy and Molly decide to take their final opportunity to drink, have sex, and otherwise participate in the social life they'd been missing out on up to that point.

Never mind that they're not actually friends with the people with whom they're socializing, nor do they even know how to find the house where the big party is happening. What follows is the "one crazy night" formula we've seen over and over again from teen movies in the last several decades, from American Graffiti to Dazed and Confused to Superbad to Nick and Norah's Infinite Playlist to Blockers.

There are several elements that work here, starting with the chemistry between the two leads, which calls to mind that of Michael Cera and Jonah Hill in Superbad. Dever, wonderful as a child actress on the TV series Justified and later the movie Short Term 12, plays a well-drawn character, a lesbian who's out, comfortable with her identity, and accepted by her family, but hasn't yet figured out the part about hooking up with girls, essentially, the position most heterosexual high school nerds find themselves in. Feldstein, the sister of Jonah Hill, and also the actress who played Lady Bird's best friend, is also very funny as a character with a major presence.

Even more entertaining are some of the supporting actors, starting with Billie Lourd as an out-of-control rich girl, who's so good that it's almost not a problem that she's 26 and way too old to be in high school. Noah Galvin steals scenes as a theater kid, even if his character has almost nothing to do with the main plot.

The problem is the one crazy night. It's not that crazy, or even funny or unique. We've seen all of this before, most notably in Superbad and its various imitators. When it comes to high school girls reclaiming their sexuality, Blockers did it better, because it was funnier and more audacious, and the high schoolers were fighting against their unreasonable parents. In Booksmart, they're not really rebelling against anyone.

It also does that weird thing where characters take drugs, they're high for five minutes, and then suddenly they're no longer high once the plot requires them not to be. This film has them turning into Claymation characters for the (short) duration of their high, an idea I liked better when Broad City did something similar.

Plus, there's an icky subplot that has the normally appealing former Daily Show correspondent Jessica Williams having a fling with a student. I’ve no doubt that many people will relate to the themes of Booksmart, and its buzz coming out of South by Southwest was mostly positive. But it's far from the best film of its kind.