The Loosey-Goosey Judaism of Howard Wolowitz

You don't have to be a believer to be Jewish. 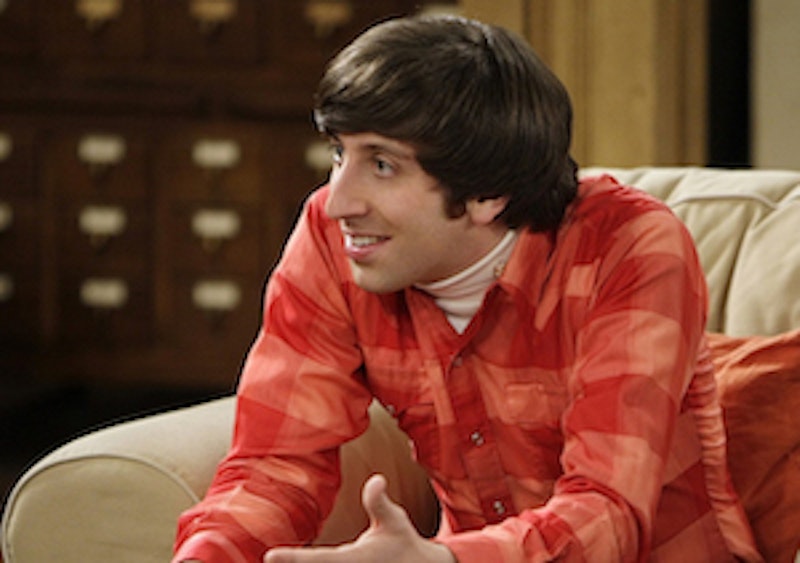 Is Howard Wolowitz Jewish? For those familiar with the hit sit-com The Big Bang Theory—which just concluded its 12th and final season—this might seem like an odd question. Wolowitz, an engineer at Caltech, is explicitly identified as Jewish throughout the series. The actor who plays him, Simon Helberg, is Jewish. A Jewish actor playing a Jewish character: no ambiguity there.

But Dan Clanton, a professor of religious studies, has doubts. In an article from 2013, he points out that, while Howard comes from a Jewish background, the show "doesn’t depict Judaism as serving as a resource for action, identity, or meaning-making" for him. Clanton argues that there's no "functional" role for Judaism in Howard's life; Judaism doesn't shape his morals or his understanding of the world. His Jewishness is like his bad haircut; a noticeable identifying marker, but something he could change without losing anything essential.

Clanton's argument is provocative and insightful. But I think it's wrong. Jewish identity, though not necessarily Jewish religion, is essential to Howard's character, for better and worse.

Jewish identity shapes Howard because Howard is a Jewish stereotype. Howard lives with his mother, an obese, overbearing woman who cooks incessantly and bellows at him from offscreen (she often asks him if he's going out to play with his friends.) He’s also portrayed as a creep and lecher constantly hitting on women inappropriately. At the same time he has an emotionally intimate homosocial relationship with his friend Raj (Kunal Nayyar), which generates numerous homophobic jokes (a psychiatrist insists the two of them are in a gay relationship; they accidentally kiss on one episode).

All of this is in line with ugly anti-Semitic stereotypes about Jewish men. Jewish men are supposed to be nerdy, dominated by their mothers, sexually repulsive, obsessed with non-Jewish women, feminized, and implicitly homosexual. The fact that non-Jewish characters in the cast are also nerdy and intelligent doesn't change the fact that those are Jewish stereotypes too. Howard is a bigoted trope. Without anti-Semitic caricature, he wouldn't exist.

While stereotype is central to Howard, it's not the only aspect to his Judaism. As Clanton says, Howard is culturally Jewish in ways that will be familiar to lots of Jewish people. He feels a connection to Jewish pop culture, from Fiddler on the Roof to Neil Diamond. He had a Bar Mitzvah. He gleefully violates kosher laws by eating bacon cheeseburgers and ignoring the Sabbath. He has menorahs in his house. He looks extremely uncomfortable when his friend Sheldon's very religious mother asks him to pray with her. Judaism informs his actions and reactions from show to show, and episode to episode.

Clanton says, "Howard’s Judaism as a conglomerate of non-determinative punch lines" which doesn’t actually motivate him. But in a sitcom, the punch lines are kind of the thing. Judaism sometimes motivates people to go to synagogue. And then sometimes it motivates people to go to Neil Diamond karaoke. For that matter, there's a long tradition of Jewish atheism, which is why Howard violating dietary laws is part of Jewish tradition. So is dating a gentile to annoy your mother (as Howard does). Or marrying a gentile because your mother won't care, for that matter (as I did.) There's nothing quite as Jewish as carrying your Judaism lightly. "Well, religion’s kinda loosey-goosey. Basically as long as you got your schmeckel clipped and you don’t wear a cross, you’re good," Howard says. It doesn't get much more Jewish than that.

"Religion never serves as a motivating factor in any of [Howard's] moral actions," Clanton observes. But religion doesn't serve as a motivating factor for my actions either; I'm an atheist. I'm also Jewish though, and that does motivate me and shape my identity in various ways. For example, it led me to write this essay.

Religion is part of being Jewish. But so is irreligion. So are dumb jokes about circumcision. There are lots of different ways to be Jewish. That's why stereotypes like Howard are inaccurate and demeaning. But it's also why Howard's lack of faith doesn't make him less Jewish.