This is a little embarrassing. 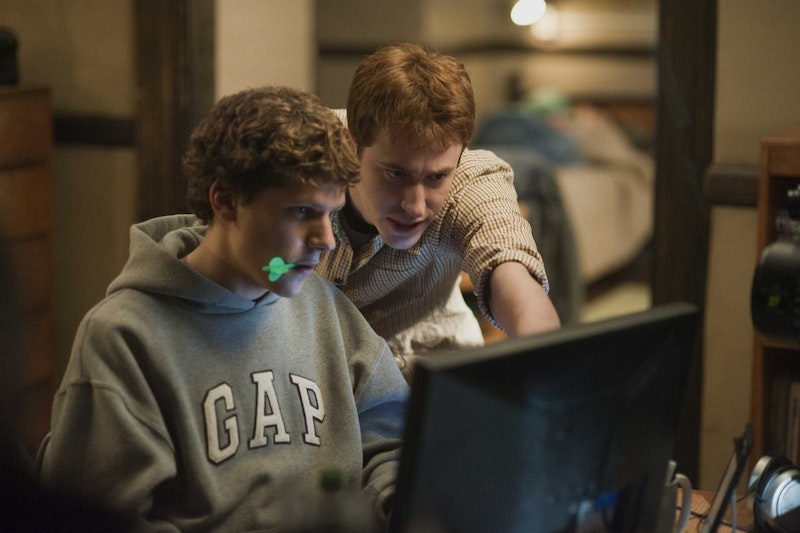 The Social Network’s a movie I’ve watched more times than any other film of the past decade. I’m simple that way. It moves fast, the people sound smart, the lighting suits me. By now I don’t actually have to look at the thing as it plays. I may put in the DVD and wander here and there, attending to my shoebox of an apartment. Meanwhile, the voices rattle along and the score hums and throbs. If I glance at the screen, I see somebody young and verbal who’s about to be rich. (Zuckerberg, Eduardo, the Winklevoss twins—this applies to all of them.) Possibly there are blue-black shadows welling about the young fellow; the effect is lush and chilly. He or somebody has on a rich suit. An Ivy League girl may be standing near, a dress climbing her thigh as she checks her device. “Is it pictures of cats who look like Hitler?” she says, deadpan. “Because I can’t get enough pictures of cats that look like Hitler.”

The movie’s as slick as they get, so slick that it equipped itself with a genuine story. Not a true story, in that Mark Zuckerberg didn’t found Facebook while pining after a girl. He was already dating the woman he eventually married. But the story works anyway. The boy might not have had a girlfriend—look at him, especially when played by Jesse Eisenberg—and this version of Zuckerberg bumps into something big and sad when the movie comes to an end. Like Charley Kane, he has everything and it adds up to nothing. Like an office nerd, he’s made himself indispensable but nobody wants him around. He’s the human focal point of a global communication system, and he’s sitting at his laptop and poking his refresh key. Fluorescent lights are overhead, an office stretches about him, and the place is empty because now it’s night and everyone has someplace to go. A sound like a folded, inverted woodwind solo can be heard. That’s “Baby, You’re a Rich Man” playing on the soundtrack. A title informs us that Mark Zuckerberg is the world’s youngest billionaire. He pokes the refresh key.

Unsympathetic souls might imagine The Social Network’s impact minus the real-life thrill of Zuckerberg’s phenomenal wealth. The gallop of the scenes might seem frazzled, the sarcasm flat. Somebody might tell the disconsolate boy at his laptop to sit up straight and watch his mouth. Subtract topicality and the film might be concentrate without water. Further, it’s an Aaron Sorkin film, meaning he’s thought about nothing but structure and zingers. The story of the self-isolated boy-prodigy is as solid as Sorkin can get with emotions. But the story might not be enough if the boy weren’t real to semi-real. Not with Sorkin’s script anyway. A similar objection applies to David Fincher’s directing. He’s a master at fitting out scenes so that they’re sleek, unsettling, and comfortable—unsettling for the nerves, comfortable for the eyes, sleek all over. I’m a sucker for that style. But when you say you’re a sucker, you’re making a confession.

I confess I like The Social Network. It’s glitzy. It’s the jazzed-up version of The King’s Speech, the old folks’ favorite when the two films were competing for Oscars. The Social Network has kids instead of middle-aged men, and it has the headlines instead of English period detail, and rat-a-tat dialogue instead of a reach-for-the-stars exhortatory monologue. But the story takes somebody rich and famous, and it tells a lie about the person so that audiences can feel their hearts move. (The speech therapist who handled George VI stuck to technical matters: the position of tongue against palate and so on. Nothing about getting the man’s feelings out.) I turned up my nose at The King’s Speech because it had hokum wrapped the wrong way. The Social Network has a nugget of genuine emotion wrapped in glitz. Probably I need both those elements. Well, there they are and I have a favorite movie. I really am that simple.