Film Review: Only Yesterday Is One of Ghibli's Finest

Lost to North America for 25 years, Only Yesterday showcases Isao Takahata at his most wistful and nostalgic. A 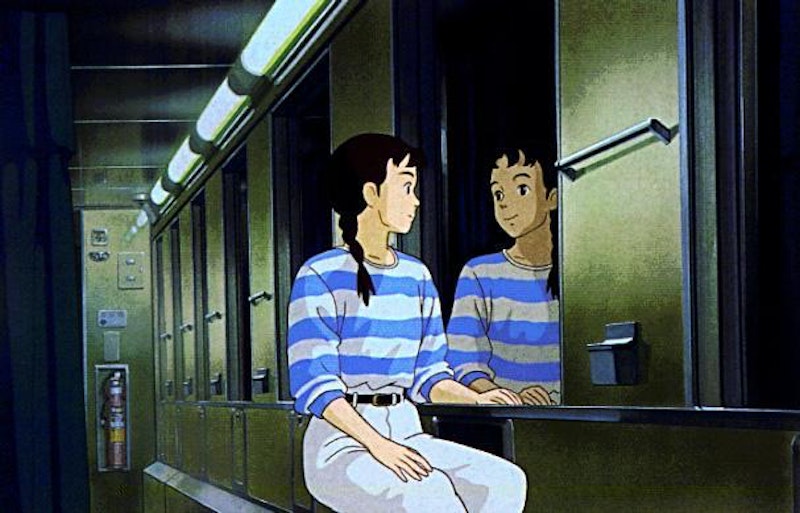 Studio Ghibli films are the only holdovers from my days as a tweenage otaku. Anime is inextricably tied to memories of my childhood—culling Suncoast shelves for the latest four-episode Fullmetal Alchemist DVD; peering over the shoulders of manga cows stationed in front of the stacks at Barnes & Noble, looking for a new volume of Hunter x Hunter or One Piece or Yu Yu Hakusho; standing on line outside the Baltimore Convention Center in the humid July heat dressed up as Doraemon, waiting for my Otakon badge, as throngs of Jeter jersey'd New Yorkers, visiting for an Orioles-Yankees weekend series at Camden Yards, gawked at the river of cosplayers stretching past multiple city blocks—but I haven't been a serious fan since 2009, and when I do re-watch a couple of episodes of School Rumble or Cromartie High School, it's mainly for nostalgic purposes. My admiration for Studio Ghibli hasn't wavered, though. Founded in 1985 by Hayao Miyazaki, Isao Takahata, and Toshio Suzuki, Ghibli is the only animation studio that can consistently compete with the emotional complexity and broad appeal of Pixar's best films.

In the United States, Ghibli is essentially synonymous with its flagship director, Miyazaki, whose 2001 movie Spirited Away won the Academy Award for Best Animated Film. This makes sense: Americans are cautious to embrace adult-geared cartoons; Miyazaki's fairytale monsters and coming-of-age action/adventure plots brim with childhood imagination. Takahata's movies are a harder sell. His masterpiece, Grave of the Fireflies (1988), follows two siblings as they try to survive the end of World War II. It's not uplifting.

Takahata's 1991 film Only Yesterday wasn't even released in the States until 2016 because Disney—Ghibli's American distributor—didn't know what to do with it. Only Yesterday is a very Japanese film, with a meandering pace and a plot that focuses more on character development than action. It follows Taeko Okajima, a 27-year-old office worker who takes a 10-day vacation to harvest safflower at a countryside farm. Stuck in a cubicle for most of the year, Taeko seeks to rejuvenate herself through manual labor. She loses herself to the past throughout the course of this trip, recalling random memories from fifth grade. The film flits between 1966 and 1988, slowly filling out Taeko's character and giving the viewer an idea of how she became so disaffected with modernity.

Only Yesterday plays out more like a wistful Sundance comedy than any conventional cartoon. In one of the '66 vignettes, Taeko remembers when her class first learned about menstruation, and the ensuing uproar it stirred in the boys. That was enough reason for Disney to pass with a polite but firm "No, thank you." But now, after 25 years, it's been released in North America with an English dub. I'd normally stick to subtitles—anime dubs are notoriously horrible, and Dev Patel, despite his general talent, is stilted and awkward as Toshio—but Takahata's hand-drawn visuals are too gorgeous to waste time reading dialogue.

I remember scrolling through Only Yesterday's Wikipedia page every couple months in middle school out of some vain hope that it had been picked up by an American distributor. I’d nearly forgotten about the movie when Amazon recommended it to me in December. After 10 years of waiting, I wasn't let down. Only Yesterday floats along like the best slice-of-life Japanese films—its closest Ghibli relative is Whisper of the Heart (1995), my favorite from the studio—chronicling life, but going nowhere in particular.