Sincerity is next to Godliness in Zach Clark's third feature. A- 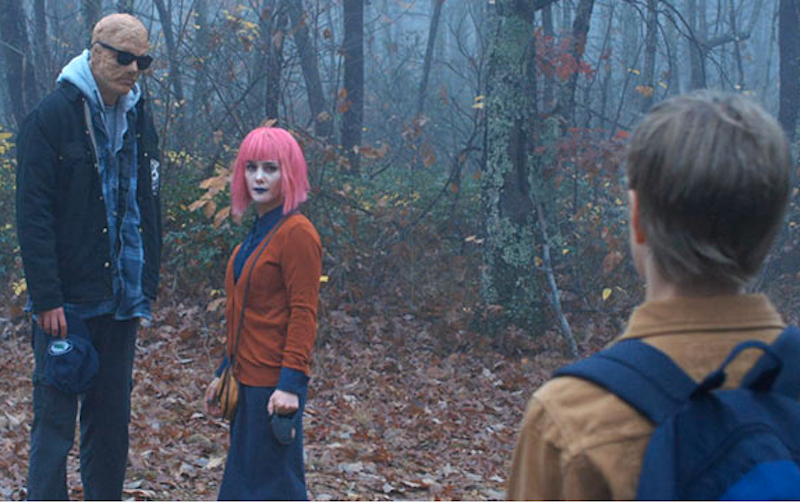 The synopsis of writer/director/editor Zach Clark's Little Sister sounds quirky to a fault, a decade-late attempt to coast on the already-crested Little Miss Sunshine wave: twentysomething Colleen Lunsford (Addison Timlin), a former teenage goth and now soon-to-be nun, returns home to her dysfunctional family after three years of silence to visit her war-wounded older brother, Jason (Keith Poulson), whose face was catastrophically burnt in Iraq. Ally Sheedy plays their vindictive mom, a woman whose rancor would send even the most satanic teen fleeing to the austere comforts of a nunnery. What initially plays out as a quieter rehash of 2014's melodramatic The Skeleton Twins—the plot similarities are undeniable—quickly reveals itself to be a more complicated, human film that doesn't ask easy questions or offer tidy solutions. Colleen's pink-haired, GWAR-worshipping nun is not the Zach Braff wet dream of every clichéd Manic Pixie Dream Girl: she's judgmental, sanctimonious, and unironically loyal to the Catholic Church.

That's what makes the moments where Colleen unwinds all the more fun. To cheer up her shut-in brother, she embraces her goth past—dyeing her hair pink, applying black lipstick and stark white makeup, and wearing a faux-blood splattered surgical smock—and dances to GWAR's "Have You Seen Me?," lip-syncing the words and using flayed baby dolls as props. Later, after re-dyeing her hair a more conservative black, she eases up on her teetotaling moralism, resulting in some of the most haunting hallucination sequences I've seen in years.

Colleen's Christian devotion is what holds the movie together: neither the character nor Clark ever fetishizes the Catholic Church; religion is not a phase for Colleen, not a means of punishing her liberal parents. Little Sister's sincerity is its most unique characteristic. It's rare now that a film treats Catholicism as anything other than a means of discussing child abuse (Doubt, Calvary) or an exploitation device (the entire nunsploitation genre). This sincerity comes into focus when Jason's fiancé, Tricia (Kristin Slaysman), asks Colleen if she believes in God. It's a stupid question to ask a nun, but one that I nonetheless found myself wondering as well. Who even goes to church anymore, much less devotes themselves to a life of austerity? Colleen's answer, though, is, of course, yes. This crystallizes her solidarity for the viewer, and elevates Little Sister above its Sundance-aesthetic.

No character is entirely lovable in Little Sister—from the goofy but hapless father (Peter Hedges) to the animal rights anarchist best friend (Molly Plunk)—but the family they come together to reform is compelling specifically for its cracks and fissures.