Film Review: Nothing Adds Up in Gold

Just another bad heist of Martin Scorsese. B-. 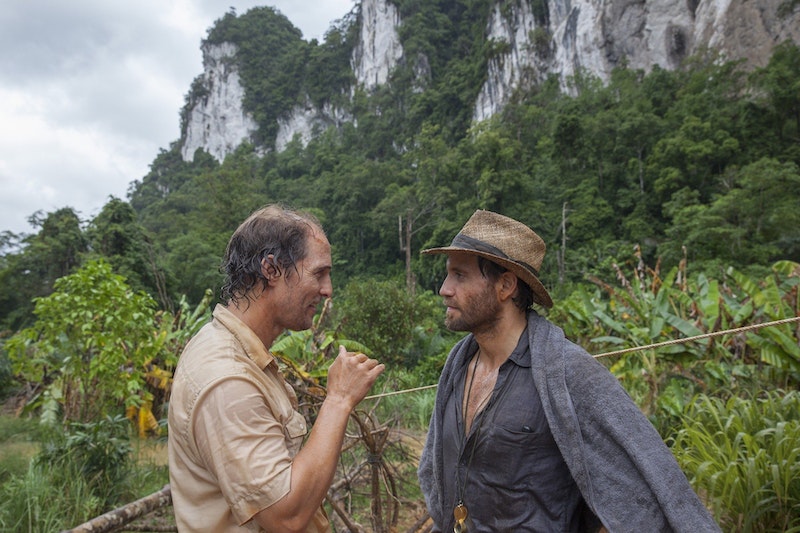 Gold is one of those movies that’s entertaining while one is watching it, but once it’s over, the viewer realizes that just about nothing added up.

Yet another entry in the “rise-and-fall in an exotic industry” subgenre—also known as “Stealing From Martin Scorsese”—Gold executes a version of the Goodfellas formula in which American hustlers are lionized, everyone’s dressed in period garb, there’s pop music on the soundtrack and, eventually, it all goes to shit. The best of the genre in recent years was the genuine article, Scorsese’s The Wolf of Wall Street; the worst was probably David O. Russell’s American Hustle, which came out a few weeks earlier in 2013. The difference with Gold is that it goes through the rise-and-fall cycle about six times.

Matthew McConaughey, uncharacteristically bald and with a prominent paunch, stars as Kenny Wells, a third-generation gold prospector in Reno who begins the movie deep in debt and down on his luck, supported only by a group of hangers-on and his long-suffering girlfriend (Bryce Dallas Howard, very unconvincingly playing working-class). One day Wells has the premonition to travel to Indonesia and team up with a brilliant-but-disgraced geologist (Edgar Ramirez) to explore the jungles of Indonesia for gold. Things start out badly—financial calamity and bouts of malaria—but then get better. Then worse, then better, then worse…

Gold is based extremely loosely on the true story of the Bre-X mining scandal, one that at various times pulls in the mining world, Wall Street, the Suharto-era Indonesian government, and even former President Gerald Ford. The movie merely changes the name of every character and moves the action a decade earlier (from the 1990s to the 80s) and from Canada to the U.S.

A better name for the film might have been Fool’s Gold, but McConaughey already starred in a movie of that name, a forgettable romcom with Kate Hudson from 2008. Directed by longtime screenwriter Stephen Gaghan, who’s directing for the first time since Syriana 11 years ago, the film moves at pretty quick pace, and it’s never boring. All of the period detail looks and feels right, even though the movie ends around 1989 even though it feels like the mid-90s by that point.

While the Indonesia scenes drag a bit, the best sequence by far is one in which McConaughey and Howard go to New York to consort with Wall Street investors (led by Corey Stoll) and are fish out of water. On the other hand, the storytelling is slap-dash, with voiceover appearing and disappearing, a flash-forward device popping up 90 minutes in, and little-to-no indication of the passage of time. A major plot twist is somewhat undercut by a certain character disappearing without having a chance to explain himself. And it’s hard to sell this as a quintessentially American tale of ambition and greed when the actual story involved Canadians.

McConaughey is fine, doing the best he can with a character who’s all over the map. Ramirez looks the part but his thick accent keeps getting in the way. Stoll's Wall Street guy is delightfully smarmy and a whole bunch of rarely-seen actors (Stacy Keach, Bruce Greenwood, Craig T. Nelson) show up in small roles. And I was impressed with how actress Rachel Taylor, playing a finance industry sexpot, is made up to look exactly like a 1980s Sports Illustrated swimsuit model.