Personal expectations and "ghosting" in Hong Sang-soo's Yourself and Yours (2016). 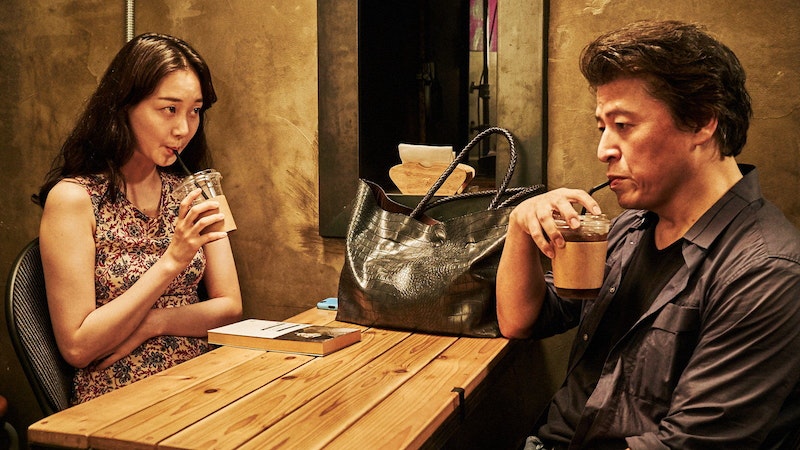 We start with Young-soo, a painter, and Joong-haeng, his friend, talking in the former’s studio. Joong-haneg relates rumors to Young-soo about his girlfriend, Min-jung: she drinks too much, and she’s been seen drinking with other men. Young-soo defends Min-jung but is nonetheless disturbed by what he hears. When Min-jung arrives at Young-soo’s apartment later that night, he confronts her; she explains herself, insists that she kept her promise to cut back (to five drinks a day); Young-soo persists, dissatisfied with her explanations; she becomes exasperated, decides they should break up, and leaves.

What’s particularly strange and fascinating about Yourself and Yours is Min-jung. Although she’s described as (and shown to be) a heavy drinker, her drinking isn’t, as far as we know, causing any problems in her life. Her relationship ends, but it’s her decision, and it’s not because Young-soo finds her drinking problematic, but because he doesn’t trust her. Min-jung is intent on living her own life, and she shreds everything in her way: not just her relationship, but also her identity. She leaves Young-soo’s apartment, and for the rest of the movie, we’re never sure if she actually is Min-jung.

Whether or not Min-jung was ever unfaithful to Young-soo is left unclear. We do see her encounter two other men, both of whom she runs into at the same cafe, and both claim to know her. To the first, she explains that she’s Min-jung’s twin sister, while the second man claims they worked together, and she denies ever being employed by the office he names. And she does take both of them for drinks at her favorite local bar. But we never see her display any affection towards either. She remains indifferent, and to her they’re just drinking partners.

Young-soo, meanwhile, is frantic, searching for Min-jung, stopping by her apartment and workplace every day. He never catches her at home and her co-worker won’t relay what, if anything, she knows of Min-jung’s whereabouts. At the end of his days of dejection, Young-soo gets drunk by himself. Strangely, he never thinks to go to Min-jung’s favorite bar. Although she’s avoiding home and work, she doesn’t skip this part of her routine.

Young-soo eventually encounters Min-jung on the street, ready to recant all of his misgivings, ready to love her as she is. But Min-jung, (or the woman we believe to be Min-Jung) continues the same bit she had with the other men: Min-jung is not her name,  and she doesn’t know Young-soo. He ignores this and continues to talk to her as if she’s the woman he loves, regardless of whether or not she is or wants to be. They go home together and Young-soo—and the viewer—feels like the couple have reconciled.  But it’s a reunion that’s empty and unsettling. Min-jung never confirms that she is Min-jung, leaving the audience unsure, while also revealing that Young-soo still only loves a projection, an ideal, and not the woman who’s actually with him in the flesh.

Yourself and Yours, despite minimal dramatic tension and a relatively light-hearted atmosphere, nags at you. Min-jung’s refusal to acknowledge her name, even when she finally sees Young-soo again, has an uncertainty that’s never resolved. And Young-soo, who has convinced himself that he fully understands, accepts, and loves Min-jung just as she is, betrays that he doesn’t care for her when he brushes off her insistence that she’s someone else. Their differences haven’t been resolved.