Halloween Kills Doesn’t Have the Stomach to Kill the Slasher

The film is ambivalent about its own genre. 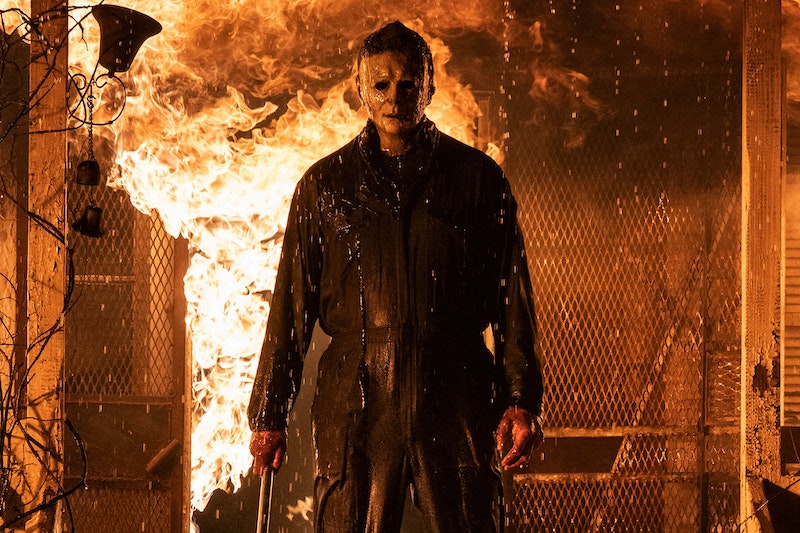 Halloween Kills is a slasher that tries to plunge its knife into the bloody flesh of the slasher itself. But director David Gordon Green doesn’t wield his critique with the intelligence and precision of a scalpel. His film is more like a lot of desultory and erratic blows with a dull kitchen knife. There are interesting ideas for vivisection here, but the execution’s a mess.

Halloween Kills picks up where the 2018 Blumhouse Halloween reboot left off. Laurie Strode (Jamie Lee Curtis) and her family have incinerated implacable masked killer Michael Myers. Inevitably, Michael miraculously survives, and picks up his various edged weapons once more, first to murder the firefighters trying to save him and then to murder everyone else.

Laurie (in a very poor decision) is sidelined with injuries for most of the movie. Instead the townspeople of Haddonfield are front and center. They’re sick of being victims and led by Tommy Doyle (Anthony Michael Hall) they decide to hunt the hunter and deliver vigilante justice.

The slasher genre is built on the collective paranoia about stranger danger and unstoppable killers. Michael’s remorseless and unthinking—any excess of force is justified in destroying him. The new film makes much of the moral error of a police officer who spared Michael’s life in 1978 during his first killing spree. The officer had known Michael as a child, and spares his life, much to his later regret. Mercy for criminals like Michael leads only to woe and death; it’s a weakness.

But switching hunter and hunted calls into question the slasher’s deliberately simplistic binary of good and evil and its embrace of violent retribution. Tommy’s chant of “evil dies tonight!” isn’t presented as triumphant empowerment, but as a kind of delusional excuse for violence. Green keeps cutting away from traditional Halloween kills to show scenes of Tommy’s mob surging pointlessly through hospital corridors, injuring people in the stampede and rabidly going for the wrong targets. “Now he’s turning us into monsters,” Laurie mutters. Her daughter, Karen (Judy Greer) ruefully adds that there are no innocent victims.

The problem is that Green never resolves his slasher with his anti-slasher. Tommy is vaguely guilty for setting the mob loose, but it doesn’t cause him to reconsider his methods or question the logic of eye for an eye. It just makes him want to go out and kill Michael even more.

Similarly, the film makes much of Michael’s initial murder of his sister when he was six, emphasizing his childhood psychological trauma rather than (as in the previous film) a stalker’s obsession with Laurie. Green could’ve chosen to humanize Michael or question his monstrosity, as Rob Zombie did in his 2007 Halloween reboot. Instead, Laurie’s final soliloquy is a confused rant about how he’s an all-powerful and unkillable eldritch force. When the mob gets to Michael, earlier ambiguity is tossed aside; Michael’s bad, the townspeople are good, the community is justified in embodying absolute evil in this one guy in a mask, and rooting it out.

Green seems inspired in part by movies like Fritz Lang’s M and James Whale’s Frankenstein, which manage to balance horror of their monsters with horror at the way communities treat the people they’ve labeled, justly or unjustly, as monsters. But he also wants to deliver a typical Halloween franchise entry, with escalating spectacular kills and an ever-more-invulnerable antagonist.

The result is a confused film that hacks and stabs, but never figures out who its target is. Halloween Kills take a swing at the slasher but isn’t bloody-minded enough to deliver the finishing stroke. Which is a betrayal of its genre in a way. But not one that makes for every entertaining viewing.