Megan Fox with the Most Cake

Jennifer’s Body (2009) isn’t trying to prove anything ideologically or otherwise—this is a fun ride through the amusement park of female sexuality. 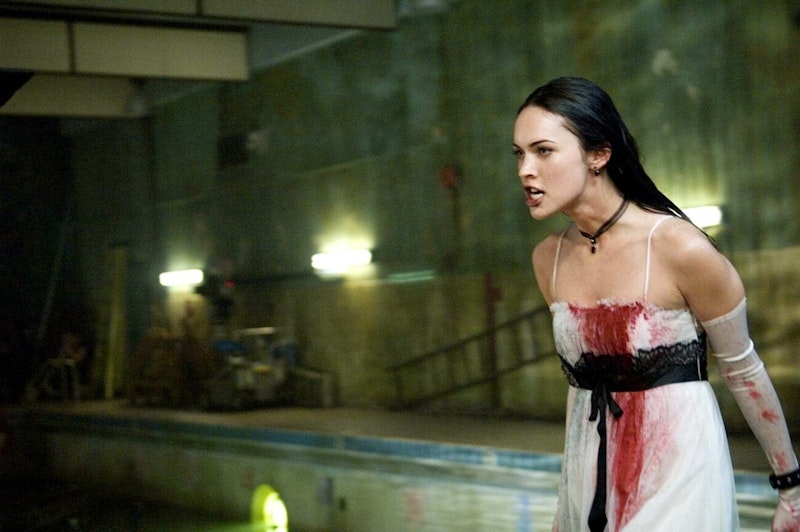 “Hell is a teenage girl.” Thus begins Karyn Kusama’s film, Jennifer’s Body (2009): the harrowing and comical story of Anita “Needy” Lesnicki, a teenage girl from a small town called Devil’s Kettle. Needy (Amanda Seyfried) is a nerdy “Plain Jane,” with messy hair that gets tangled up into her brown glasses. By contrast, her best friend, or should I say, her “BFF,” Jennifer Check (Megan Fox) is gorgeous. She’s the kind of girl that would end up as the Playboy centerfold, the girl with full lips and even fuller breasts, the girl who regularly “puts out,” and cares only about her looks and social status. In other words, Jennifer is an Alpha Female, whom Needy dutifully follows around.

High school is stressful. Education is secondary, and social status is always on the line and one must be relevant. At least for those who care about that, and Jennifer certainly does. One evening, right before Needy is supposed to meet her boyfriend Chip (Johnny Simmons), Jennifer persuades her to go to a bar to see a concert by an indie band, “Low Shoulder.” Exhibiting their emo image (with requisite black clothes and black eyeliner), the band members zero in on Jennifer. They think she’s a virgin and a perfect match for something they’re planning on doing.

Jennifer’s enthralled by the lead singer, Nikolai (Adam Brody), and while she’s already planning the next sexual encounter, Needy warns her about the band’s plan. Jennifer’s more annoyed that Nikolai thinks she’s a virgin: “I’m not even a backdoor virgin,” she proudly claims. Nikolai and the bandmates kidnap Jennifer and the next day, she returns to the school noticeably a different person.

As the film unfolds, it becomes clear that Jennifer was almost killed by the band members in what was a sacrifice gone bad. In order to become a successful band (“Do you want to be an indie band forever, or do you want to be like that guy from Maroon 5?,” says Nikolai during the sacrifice ritual), they’ve made a pact with Satan. Except, Jennifer’s not a virgin, and although they end up being famous, their success is short-lived.

After Jennifer’s bizarre experience, high school boys begin to drop like flies. They’re cruelly murdered, their bodies opened up, and parts eaten. The culprit is Jennifer and now that she’s become a demon herself, she needs to feed on boys in order to continue to look gorgeous.

Needy understands that something’s gone terribly wrong with her friend, and she repeatedly tries to help her. But the more Needy distances herself, the more Jennifer is sure that her next victim will be Chip. Needy and Chip appear to be truly in love, and Chip’s the kind of guy who’s genuinely interested in being with that one girl who cares for him. He’s emotionally brooding but not in an “emo” way, and more than just her body, he actually cares for Needy’s wellbeing. As the victim count rises, Needy does her own occult research, and concludes that in order for murders to stop, she has to kill Jennifer. Jennifer is not just “high school evil” but “evil evil.”

Jennifer’s Body is not a usual horror film. Kusama’s directing and the superb script by Diablo Cody blends genres together (Cody herself has a rather fascinating life story). This mish-mash results in an excellent exploitation film that’s not only branded as horror, but also comedy. Teenage everyday dramas are stressful enough, but girl teenage dramas are on a whole another scale of suffering and frustration. During those years, girls feel everything intensely, and what’s bursting forth is their sexuality that’s inextricably linked to boys. While trying to avoid being an object, girls willingly objectify themselves in order to feel superior and in control.

Although it bears similarities to Brian De Palma’s Carrie (1976), Jennifer’s Body captures the spirit of overflowing, hormone-filled female sexuality far better. Just as it’s impossible for a woman to fully enter into male consciousness, so it is impossible for a male director or a writer to metaphysically capture the strangeness of female sexual appetite and simultaneous repulsion of it. And yet, I wouldn’t consider this a feminist film. It has too much humor and intelligence.

The film pays homage to previous films in similar genres (“Are you wearing my Evil Dead t-shirt?” asks Needy.), and while seeking perfection, it also makes fun of itself (it doesn’t take its message seriously like, say, Tori Amos did in her album, Boys for Pele). This is Heathers meets Evil Dead meets Faster Pussycat, Kill! Kill!, while never abandoning its own identity. Cody’s script (who also wrote 2007’s Juno) shows a writer with intelligence, wit, and at home with exploitation genre. Similarly, Kusama turns the tables on sexual objectification and Megan Fox’s public image. Suddenly, and perhaps for the first time, Fox is in control of her sex appeal both through humor and horror. There’s a sense of strange humility (if one can call it that in an exploitation film) coming from Fox because she became human through the whole process—a girl who’s just trying her best to be herself but keeps failing.

The script moves fast and delivers great one-liners. When Needy appeals to Jennifer to save Chip, she recalls childhood memories, to which Jennifer replies, “Um, okay, Hannah Montana!” When the band members begin their sacrifice incantations, Nikolai opens up a piece of folded paper that presumably contains the incantation itself. His bandmate looks at him in confusion, and Nikolai responds, “What? I found it online.”

Jennifer’s Body isn’t trying to prove anything ideologically or otherwise. This is a fun ride through the amusement park of crazy female sexuality with a touch of horror and gore (there are William Friedkin’s The Exorcist-inspired moments), but mostly humor. Going through teenage changes is both funny and horrific, and Kusama and Cody have captured the beauty and ugliness of growing up, while having fun and bending the genre that ultimately escapes categorization. Girls just want to have fun, but the fun can turn horrific, and in Jennifer’s and Needy’s case, deadly. Female friendships sometimes border on obsessive, and you never know when a girl might turn on you because some have a special talent at being the meanest and most evil monsters in the room.