Claude Chabrol, Brian De Palma, and other directors that get left in the middle. 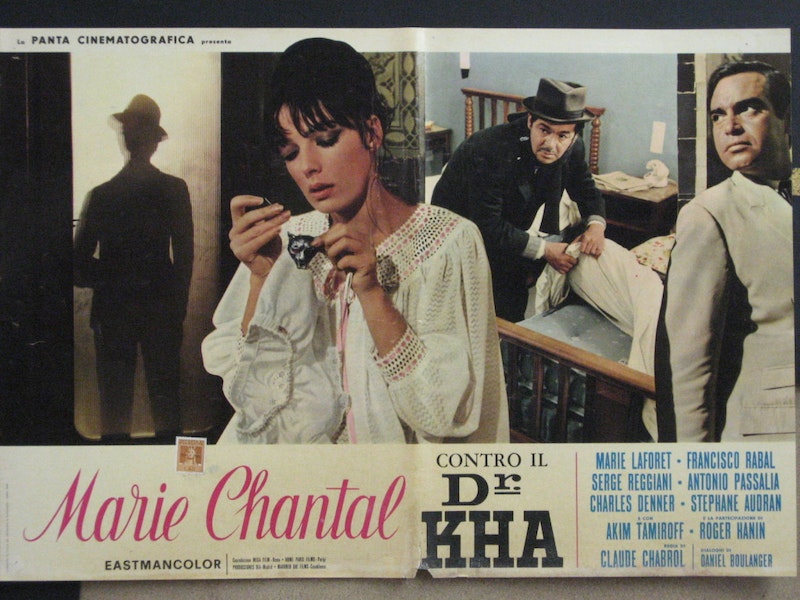 Any artist with a diverse body of work is going to be misrepresented in the media and critical analysis. You don’t have to follow the letter of auteur theory to recognize that any working director will imbue whatever they make with themselves and their personality. A lack of personality or charisma, as with Sam Wood or Azazel Jacobs, is still a signature. Tracing the through line and constructing a cohesive, let alone compelling, narrative for certain directors is easier than others: Wes Anderson, Woody Allen, Quentin Tarantino, Fassbinder, Buñuel, and Bergman make films that are obviously themselves and no one else. The same goes for Classic Hollywood directors like John Ford, Howard Hawks, Vincente Minnelli, and Josef von Sternberg, who had enormous technical advantages but far more creative limitations.

No need to rerun Andrew Sarris’ ideas for the millionth time, because he underrated one of the best directors of the studio system: Michael Curtiz, a man who made 86 films in America and 64 more all over Europe before emigrating from Hungary in 1926. They include Casablanca, Mildred Pierce, The Adventures of Robin Hood, Angels with Dirty Faces, Yankee Doodle Dandy, The Breaking Point, White Christmas, and Captain Blood. This is a man with no consistent subject, genre, or fixations other than working constantly. Yet all of his films are his own, and while he may not have John Wayne talking to a tombstone or Cary Grant talking over someone in every other movie, his personality comes out in his technique.

Technique defines a filmmaker more than any other artist because it defines perspective and personality. A director with no visual imagination and anything short of a brilliant script is going to leave people disappointed whether they know what a tracking shot or a split diopter is or not. An artist like Curtiz can turn an unfinished melodrama with no ending into an enduring masterpiece, as with Casablanca. Similarly, Brian De Palma can reach and entertain a variety of audiences with his work because he shoots in all directions. But when he arrived at Warner Brothers just eight years after Curtiz’s death to make Get to Know Your Rabbit, he realized his mission to smuggle avant-garde ideas into big commercial movies was going to be much harder than he thought.

Unlike Tarantino, Michael Mann, Christopher Nolan, or Paul Schrader, the breadth of De Palma’s work is consistently overlooked. You could say the same for Scorsese, but even Kundun was a joke on The Sopranos, and he’s simply been more visible and active in pop culture and the film world than loner De Palma, adamant on only doing press when he has something to sell. Despite learning, practicing, and espousing Alfred Hitchcock’s “grammar of cinema," De Palma didn’t pick up on the old man’s knack for publicity and image control, as crucial to the success of a film and the careers of everyone involved as the film itself. You treat people around you perfunctorily, and the public with sarcasm and contempt, and they’ll only love you for so long. Peter Bogdanovich made the same mistake, another guy adept at multiple genres, now remembered for The Last Picture Show, and maybe—maybe—Paper Moon.

These men, like Hitchcock, had an even mix of hits and duds, but unlike their admitted master, you can’t boil them down to a word like “Hitchcockian” or “Lynchian” or “Sorkonian” (God help us). Claude Chabrol is the same case, and he’s even more misrepresented and undervalued than De Palma, America’s son of Hitchcock. For half a century, Chabrol has been pigeonholed as the “French Hitchcock,” a reductive and inaccurate description more applicable to Rene Clément or Jacques Deray. The films that originated with Chabrol and/or writing partner Paul Gegauff—Les Cousins, Les Bonnes Femmes, La Rupture, Le Boucher, Les Noces Rouges—are more distinctly his than later, bigger works adapted from novels or true stories. These include superb Isabelle Huppert films like Violette Nozière, Story of Women, and Madame Bovary. 1995’s La Cérémonie, based on the Ruth Rendell book A Judgment in Stone, is usually regarded—on the rare occasions that someone in America talks about Chabrol—as his last great film (it’s actually 2000’s Merci pour la Chocolat aka Nightcap).

All of the above films could make a cycle, despite being separated in some cases by decades. But look at the way his personality manifests in assignments and desperate jobs: Marie-Chantal vs. Dr. Kha, aka Blue Panther, was made in 1965 in the middle of a bad dry spell for Chabrol, and he was “reduced” to making spy spoofs and James Bond rip-offs. What’s striking about Blue Panther is that it comes only a year before Joseph Losey’s Modesty Blaise, the best James Bond spoof until the Austin Powers trilogy. Yet unlike Losey’s film, abstracted and obscure but still full of catchy music and elaborate set pieces, Blue Panther has the same minor key, downbeat feeling of the thrillers that Chabrol would begin making in rapid succession at the end of the 1960s.

Blue Panther was just released in English for the first time, along with 1963’s Landru, aka Bluebeard (Kino Lorber put out these discs—why are they reverting to unnecessary English titles? Blue Panther I get, but “Bluebeard” is more confusing than “Landru”—which “Bluebeard”?). Both films offer an opportunity to see Chabrol spread out while stamping every frame and note with his signature. Like De Palma with The Untouchables and Mission: Impossible, Chabrol knows he’s just having fun with Blue Panther, and all he wants from it is a hit, not a work of art. De Palma was in the same position in 1986 and 1995, except his career as a gladiator in commercial cinema wasn’t as disastrous as Chabrol’s.

Landru isn’t an unfamiliar mode for Chabrol if you’ve seen any of the Huppert period pieces or the other film he made in 1963, a modern Shakespeare adaptation called Ophélia starring Andre Jocelyn, an excellent actor who appeared in two Chabrol films and nothing else. “The Landru Affair” was as sensational and publicized in World War I France as the Yorkshire Ripper and the Zodiac Killer would be years later on their own turf. He treats Landru himself with ambivalence, never showing us any crimes or violence, and when he continues to insist on his innocence up through his hanging, even the court—and the audience—begin to doubt what looks like something open and shut. Before the execution, Landru’s lawyer begs for the truth. Was he innocent? “That, I’m afraid, is baggage that travels only with me.”

Hitchcock never would’ve tolerated the ambiguity and looseness of Chabrol’s films, much less their slow and steady pace (contrary to Tarantino’s recent novelization of Once Upon a Time in Hollywood, Chabrol’s work is not “pulse-devoid,” but he finds Hitchcock himself boring). He also shared few of the preoccupations or fascinations that Chabrol worked into his cinema. Nowhere in Hitchcock is there any class analysis or parody, they take place in a world of their own. Chabrol’s characters may move like mannequins, and speak like Xanax zombies, but, if you lived in France, they could very well be your neighbor. Maybe not the murderous aristocrat in Alsace, but certainly the detective played by Maurice Pialat in This Man Must Die, or either of the two vagabonds in La Cérémonie and the petit bourgeois family they work for and eventually murder in cold blood. These things happen—not crop dusters, though.

The “French Hitchcock” is a form of wish fulfillment, as if the people who promoted that description wanted Chabrol so badly to make more exciting and titillating films. Since his 1968-1973 cycle, the phrase has stuck, and that’s how he’s known to newcomers. Those interested in costume pictures or stellar literary adaptations might be turned off by the Hitchcock label, much as De Palma’s reputation for gore and suspense eclipses his scabrous political comedies like Greetings; Hi, Mom!; and The Bonfire of the Vanities. Chabrol made 50 films, while De Palma has managed 30. In the end, all of that’s reduced to a nickname: “French Hitchcock” or “Son of Hitchcock.” The lack of access to certain films isn’t an excuse for the lack of imagination in film criticism, and we owe directors other than Ford, Lynch, and Wong Kar-wai a fresh review with open eyes and an open heart.