On Days, the new film by Tsai Ming-Liang. 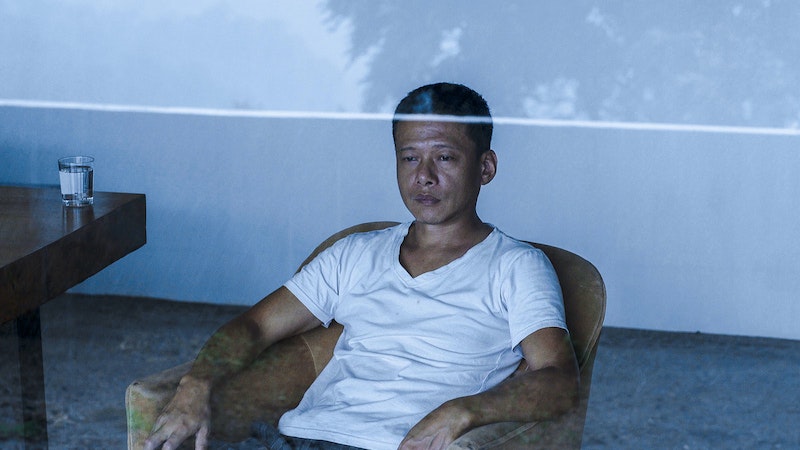 August 12: “damn im afraid im gonna forget that i’m leaving work early tomorrow to go see Days,” I text Nicky. He writes back: “Print out an image of a massage parlor and put it on your desk as a reminder.” I set an alarm instead, and when it goes off at 3:30 p.m. on August 13, I clock out and drive across town to Beverly Hills. Forget parking in the garages, I know the secret street spots from my early days in LA, when I worked in the neighborhood. I stroll up to the theater, expecting it to be teeming with people—this is Days’ theatrical debut in America, playing in only a handful of theaters across the country.

The theater, Lumiere Music Hall, is deserted. The box office looks empty, and the door to both it and the theater are propped open. I step inside, and see that the ticket-taker is crouched on the floor, looking at something on a screen, his back turned to the street.  “Hey,” I say, and hand him my printed paper ticket (I’d purchased in advance to guarantee a place in the jam-packed theater), which he takes and scans in exchange for a traditional movie ticket stub, which I stash in my wallet. The concession stand is stocked but not staffed; maybe Days isn’t really a popcorn movie, anyway.

I walk into theater number 3, and despite the scene in the lobby, I’m still surprised to find it’s empty, save for one woman. I take a seat in the middle, near the back, and she turns around to see who’s joined her. While waiting for the movie to start, I wonder, How would Tsai feel about this empty theater? The experience so far isn’t entirely unlike an earlier film of his: Goodbye, Dragon Inn. As the trailers start to roll, a third person enters and settles in one of the rows between me and the other woman. I’m distracted throughout the trailers by an idle curiosity which will never be satisfied about these other two people, who they are, and how this movie will make them feel.

Since his first feature, Rebels of the Neon God, Tsai’s movies have strayed further from traditional story-telling. Days is another step towards formalism, informing our group of three with a title card at the beginning that the film has been intentionally left un-subtitled. Days then opens on Lee Kang-sheng (“Kang” as he’s called in Days) sitting in a chair, seen through a glass window, rain streaking down. We watch Lee watch the rain in silence for several minutes—little happens. Lee breathes, blinks, at one point glances off to the side. The rain streaks the window. Days is a series of moving photographs, each scene one long take, no cuts, no camera movement.

The photographs continue to play. We see Lee take a bath, Lee amongst trees. A beautiful shot of the mountains, post-rain. Another man, Non, is introduced, and we watch him make dinner dressed only in shorts. He remains obscured for several minutes and I wonder if we’re still watching Lee. He doesn’t have the same scars. He cooks over a fire in his apartment, cleans vegetables and fish in the shower, continues to cook dinner, eats, and leaves. We alternate between shots watching him and Lee in silence. I think about the intentional lack of subtitles and hope that it might be a joke on Tsai’s part, since the film so far has no spoken lines. But as the narrative develops (Tsai’s films always have a story, a direction in which they’re headed, despite their slow, soft unfolding), we learn that Lee’s neck pain has returned—from another one of Tsai’s earlier films, The River, although Lee himself has sustained a neck injury. In Days, Lee deals with his mysterious neck pain by paying a visit to an acupuncturist, and it’s in this scene that the first lines of dialogue are spoken. I don’t know Mandarin, but I’m guessing the doctor was asking Lee how he felt, and making adjustments. The needles in Lee’s neck and back have burning coals on the end that look like marshmallows. We watch them smolder, burn down.

About the massage parlor: there’s no massage parlor, but there’s a scene with a massage. Lee and Non unite in this scene, near the end of the movie. Non arrives at Lee’s hotel room, rubs him down, jerks him off. But the scene isn’t lewd, it’s tender, intimate. We’ve spent the movie watching these two men move about Bangkok in silence, connecting only in this moment with each other. Lee pays Non and gives him a music box. Non sits on the bed with the music box for several minutes listening to it play. He thanks Lee again, and leaves; after hesitating, Lee leaves too. We see them eating together at a restaurant in silence, and I think maybe they’ll stick together, trying to maintain their connection, break the spell of loneliness.

The last scene is Non sitting alone at a bus stop, the citizens of Bangkok milling about, passing him by, Non anonymous. I’m waiting for Lee to approach him, to sit down with him, for them to smile at each other. Non eventually takes out the music box, plays the tune for himself, remains alone on the bench, and the film ends. The minimalism of Tsai’s films are what makes them so powerful, and the loose connecting threads between them build a sense of intimacy for those who commit to viewing the entirety of his (relatively slim) filmography. Lee’s in all of Tsai’s films and always plays a version of the same character, although it’s doubtful whether the same man has lived all the lives we see Lee experience. (In Stray Dogs he is—or was—married with two kids).

The length of Tsai’s shots allow the audience to spend time with the scene and absorb more than is usually possible in a movie. With no camera movement and minimal movement from the actors, one’s eye is free to wander throughout the scene, spend time in every inch of the image. With so little open drama, minor actions by characters become significant, their few spoken lines imbued with meaning.

Tsai’s films are lonely, quiet, and often abject, but they’re also beautiful and comforting. Tsai depicts a world of isolation and indifference, which only heightens the intensity of these brief moments of connection he grants his characters. In What Time Is It There?, we watch Lee’s character pine for Chen Shiyang-chyi’s character, a woman to whom he sold a watch before her trip to Paris. In The Wayward Cloud, we’re rewarded with Chen and Lee reuniting and forming a relationship, although the intense final scene leaves one wondering whether their connection is truly meant to be. In Days, the gift of the music box, the dinner, and the loneliness of both men negates the transactional nature of their meeting in the hotel.

Days, even more than Stray Dogs, shows how much can be communicated without words, with a look, a gesture, expression, action. Tsai understands the limits of language and is a master at communicating with the spaces between words. Lee and Non speak briefly, only to discuss logistics, but we’re immediately able to understand how meaningful their few brief hours together are. The most important feelings we have are those for which there never seem to be the right words.